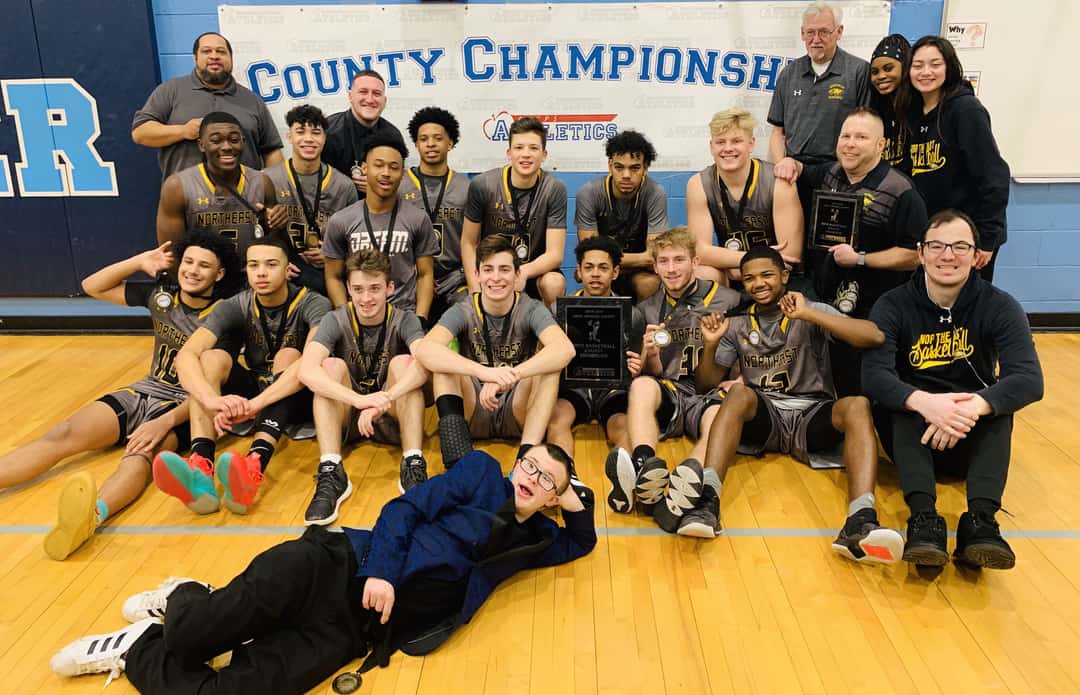 As a throng of fans, classmates and parents, all holding cellphones, stood in front of Northeast High’s boys basketball bench for the awards presentation after the Anne Arundel County boys championship late Saturday evening, Jaylin Albury’s eyes welled up.

The crowd cheered loudly as Albury was the first to receive a medal. After Eagles coach Roger O’Dea received the championship plaque, he presented to his senior leader.

Northeast is finally champions after a 64-42 victory over 15th-ranked Annapolis at South River. Albury scored 23 points for the Eagles, and Trent McNeill scored 10 of his 11 points in the opening half.

The Pasadena school (18-4 overall) never trailed after the midway point of the first quarter, dominating an Annapolis team that lost once in regular season play. It marked the Eagles’ first victory over the Panthers.

Northeast opened in 1962. The Eagles’ prior league championship came in 1992.

The wait is over.

“Me being an alumni and leaving and coaching in the city and seeing what was going on with the school and the program, it feels awful great to me,” O’Dea said, “because that was my mission when I stepped down from one great program and turn this into a great program.”

O’Dea was at Edmondson when the Northeast varsity job opened up in the middle of the 2010-11 season. The Eagles were winless when he took over, but believed brighter days were ahead.

“I told them guys they were going to be the foundation, laying the ground work and we’re going to build a house from here,” said O’Dea referring to the 2011 squad that finished 2-20. “Once they changed the culture, these guys [Albury and Trent McNeill] just brought right in. They saw everything.”

Albury and Olamide Ajayi joined varsity two seasons ago while McNeill was on junior varsity. After a promising 4-2 start, the proverbial bottom fell out.

“We were a .500 team, now look at us,” said Albury, whose team lost to eventual state finalist Reservoir in the East final. “It really started with the summer leagues, workouts after school.”

It all paid off gloriously Saturday as Northeast out-played Annapolis (19-4), the gold standard for Anne Arundel basketball, for nearly the entire game. The Panthers got out 5-0, but the Eagles claimed a 14-8 advantage after the first quarter.

Annapolis pulled to 14-13, then Northeast, starting with McNeill’s 3-pointer, scored 11 of the next 12 points. Albury capped the run, powering his way to the basket and was fouled.

When Darrell Sheppard’s high-arching jumper off the baseline over Annapolis’ Malik Carrol, fell through the cylinder for a 28-17 advantage late in the first half, it was obvious Northeast wasn’t just happy with being in its first county championship game.

“We knew we were the underdogs, we knew everybody was overlooking us,” said McNeill. “The last time we played Annapolis we weren’t as healthy as we could’ve been. We came into this game knowing if everybody’s locked in, we had this.”

The Eagles, who lost 67-58 at home to Annapolis last month, dare the Panthers to beat them from the perimeter with a stingy 2-3 zone defense. They lost their only inside presence, Stephen Haley, to a fourth foul midway in the third with a 37-30 lead.

No problem. The Eagles effectively hit the boards and reserve Mason Kanipe buried a dagger, pushing the lead back into double digits at 44-32 late in the third.

It didn’t dip under into single digits as Albury went nine-of-10 from the free throw line in the fourth quarter. Sheppard, a senior, finished with 10 points.

Carrol had 10 points for Annapolis, which only loss to South River en route to the regular season title. The Panthers closed the first half Saturday with three 3-pointers to pull to 28-26, but were largely ineffective against an inspired Northeast squad.

Before the awards ceremony, O’Neill sat alone in a chair with his head down. He was thinking about his best friend, Brad Cropper, who died of cancer in 2018. O’Neill has Cropper’s name on his basketball shoes.

Albury dedicated his efforts to his father Chris, a Northeast assistant who’s been his lifelong mentor. O’Dea carries a card with the name of his late father, Patrick.

Every championship has a beginning. The Eagles’ story will continue with the Class 3A East Region playoffs, hoping to take another step and reach their first state Final Four since 1983.

“They haven’t forgotten that feeling,” said O’Dea. “They’d like to continue feeling what they felt tonight.”