No. 7 Sailors fend off Mount Carmel behind Zaranski’s 32, claims first in IAAM B hoops 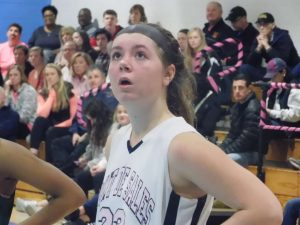 In the Zaranski Zone: Mount de Sales senior Kristen Zaranski put her team on her back Friday night at Mount Carmel. The guard scored 32 points, hitting two free throws late in regulation to secure a 51-46 victory over Cougars in a battle for first place in the IAAM B Conference.

The senior guard put together another clutch performance Friday, scoring 32 points, leading the No. 7 Sailors to a 51-46 victory over Mount Carmel in a matchup of IAAM B Conference unbeatens in Essex.

The win leaves Mount de Sales (18-3 overall, 9-0 IAAM B) in sole possession of first and the top-seed for the upcoming postseason tournament with Severn School and Gerstell Academy (combined two league wins) left. The Catonsville school has won eight straight.

With the Sailors holding a terse 49-46 advantage, Mount Carmel fouled Abby Kuhn and put her on the free throw line for an one-and-one with 15 seconds left in regulation. Kuhn missed the front end, but Zaranski hauled in the offensive rebound and was immediately fouled.

Now, Mount de Sales stands alone and will be the favorite heading into next month’s postseason tournament.

“There was a lot of energy and a lot of screaming fans at that point in the game, but I just focused on getting the rebound and hit those baskets from the free throw line,” said Zaranski, who eclipsed the 1,000-point career scoring mark (first Mount de Sales player in two decades to hit milestone) in last week’s St. Paul’s victory.

“This game was huge for us tonight, to come into the Lions’ Den and get a win with so much on line speaks so much of how hard the girls have been working all season,” Mount de Sales coach Trish Armstrong said.

“Eighteen missed layups, that is the only thing that stands in my mind,” Long said. “You can’t play in prime games like this and miss 18 layups, that’s the game right there.”

“The one thing you say about this group they are always ready to step to any challenge and they did that again tonight,” Armstrong said.

Mount Carmel and St. Paul’s (7-1) are tied in the loss column for second. The Cougars play at St. Paul’s Wednesday with the winner likely securing the No. 2 playoff seed.

Mount de Sales looks to complete its first perfect regular season in league play next week. The Sailors have yet to win an IAAM basketball championship.

“This was such a big win for us tonight, we knew that we both teams undefeated and both were really pumped up, but just really wanted it and we were in it to win it,” Zaranski said.