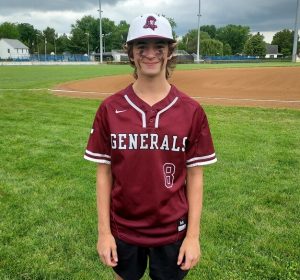 Tough Huck: Jackson Huck was poised under pressure for Towson baseball Tuesday. The sophomore went the distance, allowing six hits while managing through several Reservoir scoring threats as the third-ranked Generals advanced to the Class 3A state title game with a 2-1 decision over the No. 6 Gators in a state semifinal at McCurdy Field in Frederick.

Jackson Huck has been in tough situations before for Towson High’s baseball team.

As a key pitcher for the Generals, he knows his responsibilities when he’s on the mound. So when confronted with a few tight spots in against Reservoir in Tuesday’s Class 3A state semifinal at McCurdy Field in Frederick, Huck didn’t panic.

Three times, with runners in scoring position, Huck focused on the Gators’ batters and was able to pitch himself out of jams. He was able to strand three potential go-ahead runs on base.

“I was thinking: ‘Throw strikes, just throw strikes,'” Huck said. “I have the best defense behind me.”

It was that kind of confidence which allowed Huck and the third-ranked Generals to hold on for a 2-1 victory over the No. 6 Gators for a berth in Saturday’s 7 p.m. state championship game against Chesapeake-Anne Arundel at Regency Stadium in Waldorf.

The Cougars defeated Frederick County’s Thomas Johnson, 6-2, at the University of Maryland’s Shipley Field in the other 3A semifinal game Tuesday. It’ll be the first title game trip for Towson since 2000 when the Baltimore County squad hoisted the 2A trophy.

The Generals (17-2 overall) are on the cusp of ending their 22-year title drought thanks to Huck, a sophomore left-hander, who carried a 2.02 ERA into Tuesday’s matchup. While did allow six hits and hit one batter with a pitch, Huck stayed on task.

His mix of fastball, curveball and changeup helped keep Reservoir off balance, but he had to battle to keep the Generals in the game in the fourth, fifth and seventh innings.

After giving up a game-tying unearned run to Reservoir in the fourth with two outs, Huck walked Cameron Whitehead and gave up an infield single to Nick Usher to load the bases. He worked out that situation by striking out Zack Gaynor to end the inning.

With the potential go-ahead run for Reservoir at third with two outs in the top of the fifth, Huck got Les Thompson to lineout to centerfielder Justin Mealey. The Generals scored a run on an error in the home fifth to take a 2-1 advantage.

But Reservoir, in its first state semifinal since winning the 3A top prize in 2013, had one final chance in the seventh. Nate Del Tufo beat out an infield single and was sacrificed to second by Quinn Dean’ bunt.

Huck fanned Devin Davis, who had a sharp single to right earlier in the game, for the second out. Huck got Jordan Peguese to hit a sharper liner in the direction of Towson shortstop Traig Talley, who made the catch for the final out.

“It’s the best defense in the state,” Huck said of his team. “Let them hit the ball, put it in play. Our guys can make the plays. My change-up was very good in this game. I kept hitting the spots with my two-seam fastball.”

Towson (16-2) took an early 1-0 lead in the first. Mealey had a leadoff triple to the gap in left-center. He scored on a passed ball. Reservoir’s run scored on an error in the fourth.

“I was not all surprised how close this game would be,” said Towson coach Shawn Tormey. “Their starting pitcher (Peguese) is one hell of a pitcher, so we knew we were going to have to win a low-scoring ball game.”

Peguese, who left in the game with two out in the sixth after reaching his pitch-count limit, pitched a two-hitter, with 10 strikeouts and one earned run. Gutierrez retired the final Towson batter in the sixth.

Gators coach Adam Leader got what he needed Tuesday from Peguese.

“Jordan is just that kind of kid, an amazing guy,” Reservoir coach Adam Leader said. “I just can’t say enough about him.”

Nathaniel Droski had the only other hit of the game for Towson, a one-out single up the middle in the fifth. Del Tufo had two hits to lead Reservoir (19-5).

“It was a good ball game,” Leader said. “We got ourselves in scoring position in multiple innings. We just never got that key hit when we needed it. We hit the ball hard, it was just right at people. That’s kind of how the game goes, unfortunately.”

No. 5 Chesapeake-Anne Arundel was able to convert in key situations Tuesday, and now is a win away from its first state championship since 2014. Sean Carroll’s RBI double and Nick Karls’ pitching pushed the Lake Shore school past Thomas Johnson in College Park.

Karls struck out 10 in 6 ⅓ innings, had two doubles and scored twice as the Cougars scored the game’s final five runs to advance to their first state final since 2016.

Karls, who will play for Morehead State University next spring, doubled and scored with two outs in the opening inning. All six Chesapeake’s runs Tuesday came with two outs.

The biggest hit came from Carroll, a freshman who smacked a two-run run in the third, giving the Cougars the lead for good at 3-2. 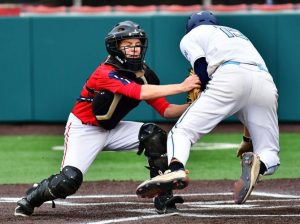 Chesapeake-Anne Arundel’s Carter Drab (right) is tagged out by Thomas Johnson’s catcher Kaden Hinth during the fifth inning of Tuesday’s Class 3A state semifinal at the University of Maryland. The No. 5 Cougars scored five straight runs to overcome a 2-1 deficit and advance to the 3A state title game, Saturday evening at Regency Stadium in Southern Maryland.

First-year coach Jeff Young, a former Cougar player and former assistant under Kenny King, saw something special in Carroll during the preseason.

I’m going to be hooked to the side with him, and we’re going to ride him out,’” said Young. “I just couldn’t be more proud of him. We’ve asked a lot of him, and he’s delivered.”

Owen Schmidt finished 2-for-3 with a run scored for Chesapeake, which last won the 3A state title in 2014. The Cougars have been to four state final fours since (including 2022), including title game disappointments in 2016 and 2017.

“Ever since I was a kid, I’ve grown up watching Chesapeake baseball,” Karls said. “It’s a dream to go out there and do that for everyone in our community.”