You never know in the MIAA A 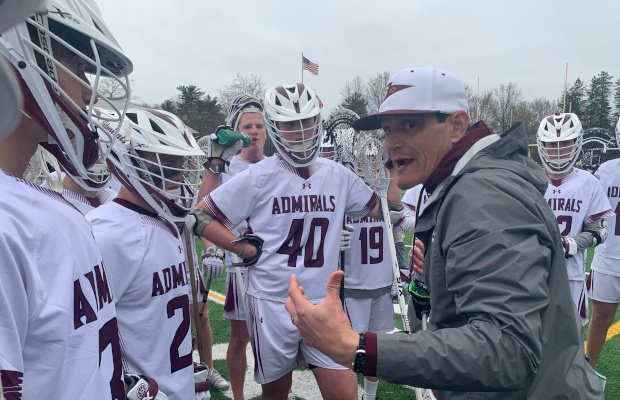 They say anything can happen on any given Tuesday or Friday in MIAA A Conference lacrosse and that was never more true than this Tuesday.

The common denominator in all three games was outstanding defense by the victors.

Severn (10-2, 4-1 MIAA A) was especially stingy, limiting the prolific Lakers (8-2, 3-1) to just five goals, as as junior goalkeeper Will Perez led the effort with 10 saves. He was supported by the close defense unit of Bo Fowler, Kijana Lloyd and Jamison Wildt and strong defensive midfield by play by Justin Queen, Brady Ervin and Fionn Kinsella. BL was limited to just 26 shots.

Another key factor was the play of Admirals’ fogo Reid Gills, who won 13-of-15 face-offs.

When the ball needed to be put in the goal, Severn’s got two goals each from Jacob Todd and Paul Baldwin. Todd also had an assist. In addition, Andrew Beard scored once and Jackson Barroll had the game winning goal.

The Patriots picked up perhaps the biggest win in program history, and certainly the biggest since they entered the MIAA A Conference when they defeated Calvert Hall, 8-7, on Tuesday.

Calvert Hall (7-4, 1-3) led 2-0 early and 3-2 at the half, but never got on the roll that may have bene expected. The Patriot defense frustrated them at every turn and with the game tied, 7-7, entering the final minute, the John Carroll (5-6, 2-4) defense forced a turnover to give the Patriots the ball and, with just five seconds to play, senior Cameron Carrigan scored the game-winner.

The Patriots came out of a timeout with 29 seconds to play and ran their offense. As the clock moved inside of 10 seconds, senior Max Snellenburg dished the ball inside to Carrigan, who made one dodge before dumping the ball in the top right corner of the cage.

“The key for us early was handling their ride,” said John Carroll head coach Don Reynolds.  “Calvert Hall is the hardest riding team in the league.  Their attack takes great pride in the riding game, and we did not handle it well last year. Coach McQuarrie (Defensive Coordinator) did an outstanding job preparing our defense tonight.”

Carrigan finished with two goals and Travis Smith had three. In addition, Snellenburg, Athan Barmer and Frank Smithmyer had one each. Another huge key was the play of goalkeeper Alex Stewart, who finished with 20 saves.

“We gambled a little tonight and wanted to prevent shots inside the paint,” added Reynolds.  “We were willing to give up some outside looks and tried not to over rotate.  Alex made a lot of big saves and as the game progressed and our clearing continued to improve and hold up.”

Reynolds also singled out  junior defenseman Josh Shrader for the work he did against Calvert Hall star Truitt Sunderland.

Senior goalkeeper Kyle Morris was the star for the Greyhounds in their 8-5 victory over the Dons, stopping 17 shots and scoring a goal.

Chase Brody netted a hat-trick for Gilman (8-6, 2-2) and Bo Webster scored twice. In addition, junior Wally Radebaugh had a goal and an assist while Michael Maloney and Kyle Morris had one goal each.