Year of the Dream for River Hill girls 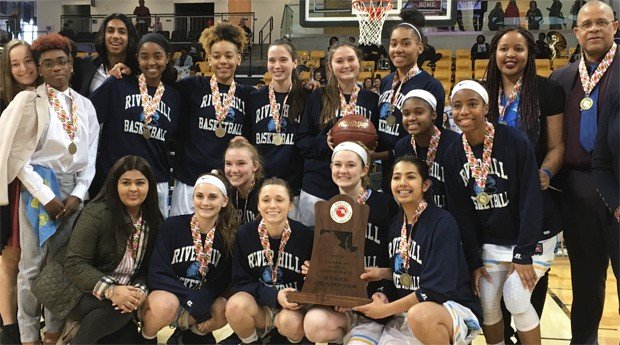 No. 16 Hawks hold off a late charge Middletown to claim the 2A state title, the second in program history

Sporting the slogan, “New year, new team, same dream,” on the back of its warmup jerseys, River Hill’s girls basketball team used that mantra to the fullest while claiming the Class 2A girls’ state title Saturday afternoon at SECU Arena.

The 16th-ranked Hawks (20-7), who started the season 2-4, came seemingly out of nowhere in their drive toward a championship, topping Middletown of Frederick County, 44-39, to claim the program’s second state crown and first since 2006. 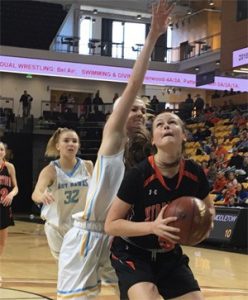 A sizzling 12-0 start, fueled in part by Saniha Jackson’s three-pointer, put River Hill in good shape, and the Hawks would need every precious point late in the game to hold off the Knights and 6-foot-2 junior guard Saylor Poffenbarger.

The quick start was in stark contrast to a sluggish beginning against Hereford in Friday’s semifinal.

“We got here earlier today,” River Hill coach Teresa Waters said. “We had time to relax. But I also think were were just pumped up and ready to play. We just got on a roll.”

River Hill senior forward Emily Masker, who had 10 points and a team-high nine rebounds, said that there was another reason for the early success.

“Yesterday, everything just seemed so bright and shiny (at SECU Arena),” she said. “We were just more used to it today.”

Middletown coach Amy Poffenbarger said that she wished she had done more to stop the Hawks’ opening barrage.

“In hindsight, I should have called a timeout earlier just to calm nerves down,” she said.

The Hawks kept the lead the entire game to give Waters her third state banner, including titles in 1A with Oakland Mills and 3A in 2006 with the River Hill.

“It is a new year and it is a new team,” Waters said. “The players change but the dream doesn’t. We take the athletes we get and we do the best we can.”

In the second quarter Saylor Poffenbarger, who finished with 27 points and 14 rebounds, began to show her range from beyond the arc.

After swishing her first triple and then converting a three-point play to cut the Hawks’ lead to 14-10, precocious freshman Anhiya Smith answered in kind with a three and finished a fast break for River Hill.

When Jackson scored off an inbound play, the Hawks’ lead was up to 21-10, before Poffenbarger had a chance to do even more damage for the Knights (24-4).

Her final three of the first half made it 21-15 until River Hill junior guard Kennedy Clark’s runner gave the Hawks a 23-15 halftime cushion.

After that, though, Saylor Poffenbarger and her mates started a steady climb back that featured a couple pf gorgeous step-back triples and two fee throws with 33 seconds left in regulation to narrow the margin to 41-39.

“We knew what we had to do, and we were getting what we wanted,” Saylor Poffenbarger said. “We just didn’t execute all the time like we should have.” 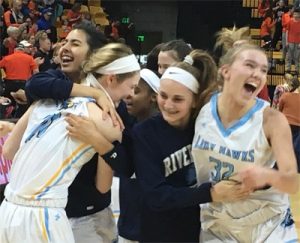 The Hawks, though, iced the game from the line by knocking down three of their final four free throws — Clark hit one and Smith the others — to prevail.

Waters admitted she was nervous during Middletown’s rally, especially at the end when Saylor Poffenbarger sized up one more long three that could have tied the score from well behind the arc.

Instead, the ball glanced harmlessly off the rim.

“I was concerned,” Waters said. “I’m not going to lie. I was hopeful that she’d miss it, and my prayers were answered. We tried to contain her as best we could, but that’s a hard three to stop because of her height.”

Smith, who led the Hawks with 14 points and four steals, did not get rattled despite her youth.

“My teammates helped me control my emotions,” she said.

Her coach said that the Hawks’ unity paid off.

“These girls play as a team, and they play for each other,” she said. “They hold each other accountable. I am just very grateful for these young ladies.”