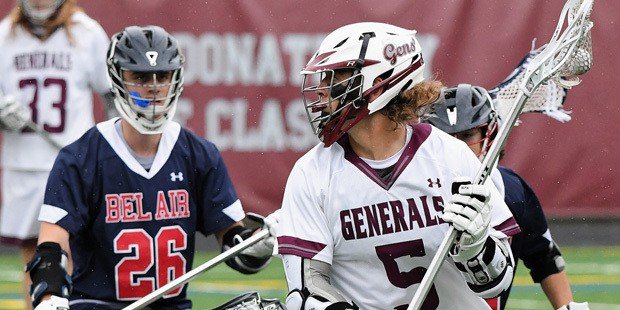 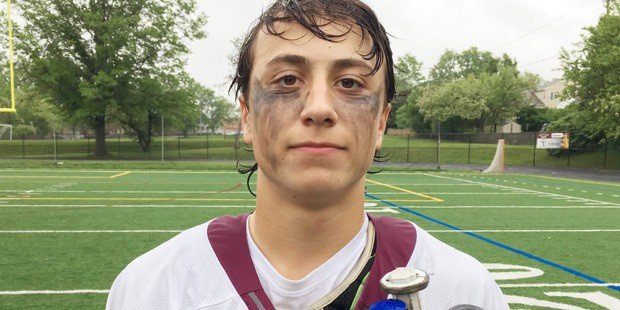 Mitch Boudreau dominated the X, winning 12-of-16 draws for Towson boys’ lacrosse Wednesday. The Generals advanced to the Class 3A state semifinals with a 9-4 decision over Bel Air in the North Region final in Baltimore County.

Towson High’s Mitch Boudreau earned an A-plus for his work at the ‘X’ in a 9-4 victory over visiting Bel Air on Wednesday afternoon in the rainy Class 3A North Region boys lacrosse final.

The junior FOGO had a banner day by winning 12 of 16 face-offs to help the the Generals (14-4) advance to a state semifinal against No. 11 Westminster, the winner of the West Region, on Friday or Saturday at Mount Hebron.

At 5-feet-8 and 155 pounds, Boudreau relies more on finesse than power to win draws.

“I know I just played my game and just tried to stay relaxed,” he said. “That’s what helped me. I just try to get the ball out as quickly as I can, but I also don’t mind grinding for the ball.”

After the Generals grabbed a 2-0 lead on goals by senior midfielder Dyson Adams and junior middie Rob Welling, the Bobcats (10-4) equalized on a shorthanded goal by senior Ryan Chan and an extra-man goal by sophomore attackman Andrew Tredinick with just over three minutes remaining in the first half.

Boudreau then took four straight draws and Towson responded by going on a 5-0 run that upped the lead to 7-2 midway through the third quarter.

Junior midfielder Leighton Bechdel, junior attackman Grant Kuehn, Adams and junior attackman Mason Hickman scored during the spree for the Generals, with Keuhn’s clever backhander on a feed from Adams just 27 seconds before the intermission being the most deflating for Bel Air.

Meanwhile, Towson’s defense, led by senior Drew Evans and juniors Teagan Hersh and Carson Reed, blanked the Bobcats for nearly 11 minutes until Tredinick found the range again with just over four minutes to go in the third quarter.

Junior attackman Noah Persing pulled Bel Air to within 7-4 after converting a pass from junior midfielder Brian Becker early in the final period, although the Bobcats would not score again and were held to their lowest scoring output of the season

“We gave everything that we had,” said Bel Air coach Doug Testerman, noting the the Bobcats were missing five starters due to a variety of knee and ankle injuries. “We did everything we could do.”

Towson coach Shawn Burke said that Kuehn’s goal that gave the Generals a 4-2 halftime advantage was a morale booster.

“Kids are so much more creative now than when I played,” said the former Calvert Hall and UMBC attackman. “That shot was like a dunk in basketball — like it’s worth more than one goal.”

Boudreau backed up his coach’s assertion.

“Everyone got excited,” he said. “we got the two goals and got our momentum back.”

It was also senior leadership, Burke said, that propelled his team forward.

“We felt we were dominating, and then we were tied,” Burke said. “Our seniors, Evans and Adams, made some big plays and then we kept winning faceoffs.”

Picture above: Towson junior forward Leighton Bechdel (#5), who scored a goal and has two assists works against the defense of Bel Air’s Connor Riggs. (Photo courtesy of Preston Turner)