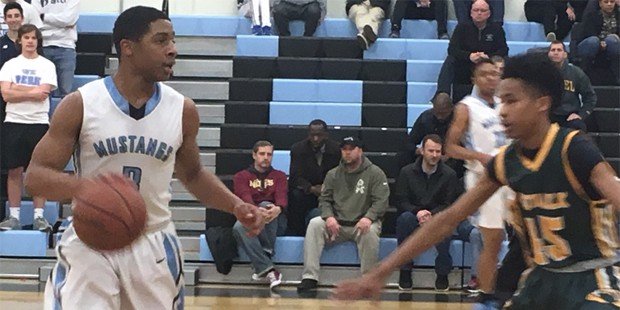 C. Milton Wright’s defense made sure that didn’t happen.

In fact, the Mustangs held the Owls 22 points below the projected number with a 46-38 victory to earn a berth — and home court advantage — in the North Region final Friday against Section I champ Woodlawn.

It was the third time C. Milton Wright prevailed at home in the sixth consecutive meeting between the rivals in the playoffs. The Owls won the other three battles at Dundalk.

On Wednesday, they were way off on their accuracy from the floor. 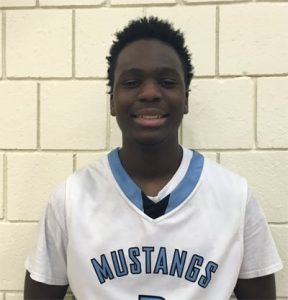 C. Milton Wright senior Quincy Haughton led the Mustangs with 12 points in Wednesday’s win that earned them a berth in the Class 3A North Region final against Woodlawn on Friday night.

“We couldn’t put the ball in the ocean,” Oppenheim said. “Our shooting was terrible.”

According to C. Milton Wright senior Quincy Haughton, who led his team with 12 points, the Mustangs’ defense was ready for the Owls’ uber-quick backcourt duo of seniors Jaylon Johnson and Michael Johnson, who still combined for 22 points.

“We studied a lot of film and we knew their tendencies,” Haughton said. “We didn’t want to let their guards get hot. That would have been a problem for us.”

The two-time defending UCBAC Chesapeake champ Mustangs (19-5 overall) had other problems with the Owls (15-10) from Baltimore County, considering that they scored their second-lowest amount of points in a game this season and still managed to collect their eighth straight win.

Dundalk’s skill and length was the issue, Haughton said.

“They have really quick athletes with long arms,” he said. “So we couldn’t get the kind of gaps that we usually find against teams in our league.”

“We did exactly what we wanted to do defensively,” Oppenheim said. “We mixed it up. We just couldn’t hit our own shots.”

It was the Mustangs who were sizzling early, fashioning a 10-2 run to close the first half with a 17-8 advantage on a Haughton drive and a 3-pointer by senior guard Jalen Jackson being the big plays in the sequence.

Dundalk never really recovered, closing the deficit to 25-22 once in the third quarter after Michael Johnson nailed a triple and then fed 6-foot-6 sophomore power forward Tremayne Martin for a bucket.

The Mustangs recovered quickly enough to re-establish a 31-23 cushion by the end of the quarter after junior Corey Patterson hit a jumper from the top of the key, junior Brian Stiemke had a put-back and senior Brye Hopkins one-timed a rebound through the hoop at the buzzer.

Freshman guard Marcus Nicholson gave Dundalk a glimmer of hope when he swished a three early in the final frame before Jackson converted a fastkbreak feed from Stiemke, sophomore Dylan Kutcher buried a shot from beyond the arc and Haughton put-back a Kutcher miss to build the lead back to 38-26 with just over five minutes remaining in regulation.

C. Milton Wright coach Jon Stefanides said his team’s ability to get both Johnsons in foul trouble early was a key to the win.

“We came out and wanted to make them work hard and maybe get in foul trouble,” Stefanides said. “And that played out for us.”

He also admitted that when the Owls went to a zone, it bothered the Mustangs.

“They put a lot of pressure on us, and got right up on us,” he added. “Their length and quickness bothered us.”

Pictured above: C. Milton Wright junior guard Brian Stiemke looks for an opening in the Dundalk defense against sophomore guard Tyree Green in the Mustangs’ 46-38 victory in the Class 3A North Section II final Wednesday night in Bel Air.