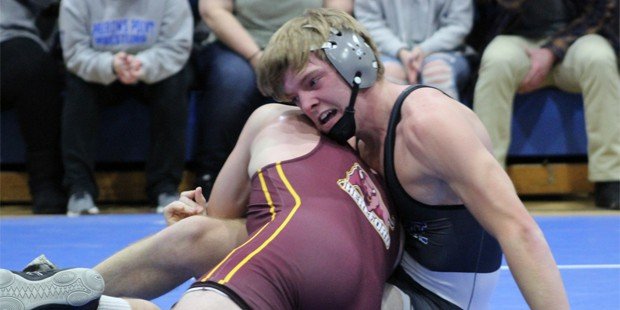 Sparrows Point continued its recent run of success over Hereford and the rest of Baltimore County on Tuesday night in their home gym with a 48-24 victory over the rival Bulls.

The match was close and went back and forth through the first six matches with both squads picking up three wins each. The Point jumped out to a 9-0 lead with a decision by Drew Gorsuch at 195 and a pin by Lexx Carr at 220.

Hereford came back to take a 12-9 lead after pins by Nate Reichert at heavyweight and Noah Traband at 106. After a win by Wayne Brooks at 113 for the Point it was tied at 12 all. The Bulls’ Morgan Vandergrift (120) gave the visitors their final lead of the night with a decision of Gage Carr, 15-12.

The Point took over from here and put four consecutive falls on the scoreboard for a commanding 36-15 lead. Registering the sixes were, Richard Davis (126), Danny Davis (132), Luke Hoenig (138) and Mike Fouts (145).
Hereford was mathematically still alive though, and Zac Zaruba (152) did his part to keep the Bulls’ hopes going with an 8-4 win over Mike Brower.

At 160, Jake Lure shut the door on the visitors with a second period fall, at 2:40, of Jake Doyle. The pin moved the score to 42-18 with just two bouts remaining.

Jimmy Kells added six to Hereford’s tally with a 36 second fall at 170 and Jake Rallo closed the scoring for the home squad with a pin of his own at 182 to leave the final score at 48-24.

Pictured above: Sparrows Point’s Drew Gorsuch (right) works from the bottom during his 8-2 win over Hereford’s Nick Moore, in their bout at 196 which opened the evening.

On Tuesday night at Hammond, Glenelg cruised to its fourth straight Howard County dual meet crown with a dominating 55-5 win in which they won 12 of the 14 bouts.

David Ridenour got the scoring started for the Gladiators at 106 with a 9-4 win over Jabari Pinkney. Hammond answered that with a 1-0 win by Shehzan Dahya over Andres Lopez Campos at 113.

The joy would be short lived for the Golden Bears as they would not win another match until the 220lb weight class. Glenelg’s 10 straight wins from 120 to 195 crushed Hammond’s title hopes.

Tino Campanile started the run with an overtime upset win over Keneth Rios at 120, 4-2. From there it got ugly quickly with Kevin Hansberger putting up a major-decision at 126, Reed Kramer added a decision at 132 and Trey Fleece tacked on three more with a win at 138.

After this stretch the score stood at 49-2 (Hammond lost a team point for unsportsmanlike conduct at 132).
Loic Tueguo earned Hammond’s final points with a 10-4 win over Massimo Conti at 220. Charlie Whitsett added six more to Glenelg’s total with a fall at heavyweight.

On Wednesday night at South River, the Seahawks essentially clinched the Anne Arundel County dual meet championship with a 45-20 victory over Old Mill.

With wins over Broadneck and North County already in the bank, even a loss to Southern would still allow South River to claim the crown (the match with Southern is scheduled for this coming Thursday at Southern).

Old Mill stormed back to win the next four bouts, but only accrued bonus points in two of those wins (with only one pin). Ryheam Tull (126) and Caron Tull (145) registered regular decisions, Damion Mansapit got the fall at 132 and Jackson Cohenour added a major-decision at 138. This only pulled the Patriots within two, 18-16.
South River snuffed out Old Mill’s hopes for a win with a four-win run of their own. The Seahawks added two pins and two decisions to the scoreboard for an insurmountable 36-16 lead with three bouts left.

Levi Garren won at 195 for the Patriots with a major-decision over Niko Nolte, 9-1. Alex Peterson put the Seahawks back in the win column when he edged Nate Flemming, 4-3, in overtime. Defending 4A/3A state champion Ka’Ron Lewis closed the dual with a fall at heavyweight to push the final score to 45-20.

At Poly on Wednesday evening Bel Air coach Craig Reddish put his 450th career win in the books. The UCBAC powerhouse was not seriously challenged on this night, downing Edgewood 69-6 and Poly 72-12.