With six Baltimore area players, HCC will compete in the Division I JUCO Baseball World Series this weekend in Colorado 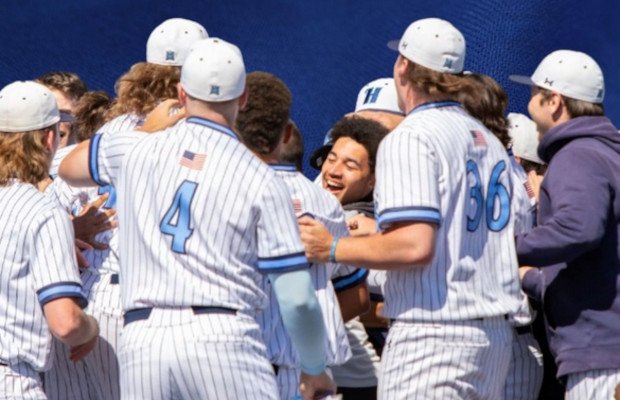 With a handful of recent local high school players, the Harford Community College baseball team is capping an incredible 2022 season with an appearance in the 2022 NJCAA Division I JUCO World Series, starting Saturday in Grand Junction, Colorado.

Harford, the 10th seed in the field, will meet top-seeded Walters State College (TN) on Saturday at 2:00 p.m, to open its national championship bid in the double-elimination field.

The Owls are 48-7 this season and earned their way to the Series by sweeping three games in the NJCAA Region 20 Tournament before going 3-1 to win the double-elimination NJCAA Eastern District Tournament, May 13-15 at HCC.

There are 10 Maryland natives on HCC’s 39 man roster, including six freshman who played in the Baltimore area, with several of them are making an impact.

Ehi Okojie, who played his high school ball at River Hill High School in Howard County has played in 30 games this year with Owls, with 27 starts. He is hitting .344 with six doubles and six home runs. He also drawn 16 walks, scored 30 runs, stole seven bases and produced 26 RBI.

Another standout has been catcher/outfielder Tyler Blittersdorf from John Carroll. He has appeared in 20 games with 16 starts and is hitting .500 on the season. He has five doubles, five home runs, 22 walks, 17 runs scored and 26 RBI.

Infielder Dylan Wyandot, a graduate of Mount St. Joseph, has also swung an impressive bat, hitting .333 while playing in 19 games with five starts. He has drawn 11 walks, scored 15 runs, knocked in four and stolen three bases.

In addition, Chuck Hafer, also from John Carroll, has produced three RBI in just 11 at bats.

On the mound Bel Air’s Austin Rohlfing has made 12 appearances with two starts, while posting a 3-0 mark. Havre de Grace grad Frank Siano has made eight appearances, all in reliefe, posting a 2-1 record with one save and 19 strikeouts in 12 innings of work.

Manager Josh Houser was a pitcher on the only other HCC team to qualify for the NJCAA Division I JUCO World Series in 2016. That squad was also seeded 10th, but went 2-2 losing both games to top-seeded Chattahooche Valley (AL).