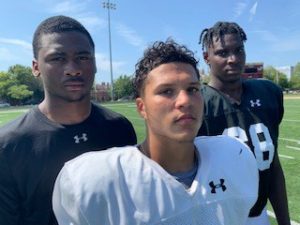 The Panthers haven’t moved since. For the fourth straight year, the Baltimore City private school is No. 1 in the final VSN Top 20.

The nationally-ranked Panthers (11-1) are hoping to get another invite to the Geico Champions Bowl. The East Baltimore school played an independent schedule for the second straight year, defending Florida’s IMG Academy (currently ranked No. 9 in USA Today’s Super 25) and Central, and New Jersey’s St. Joseph Regional.

Central and St. Joseph Regional were ranked nationally by USA Today. The Panthers, No. 5 in the latest USA Today Super 25, only loss came against then-No. 1 Mater Dei in California.

Mount St. Joseph, which won the MIAA A Conference title for first time since 2007, is second followed by MIAA A finalist McDonogh School, Class 3A state semifinalist and Baltimore City champ Mervo and Franklin, which reached the 3A state quarterfinals after winning the Baltimore County 3A Division crown.

The MIAA has five teams in the final Top 20, followed by Baltimore County (four) and Anne Arundel County (three). Baltimore City and Carroll County each had two teams.