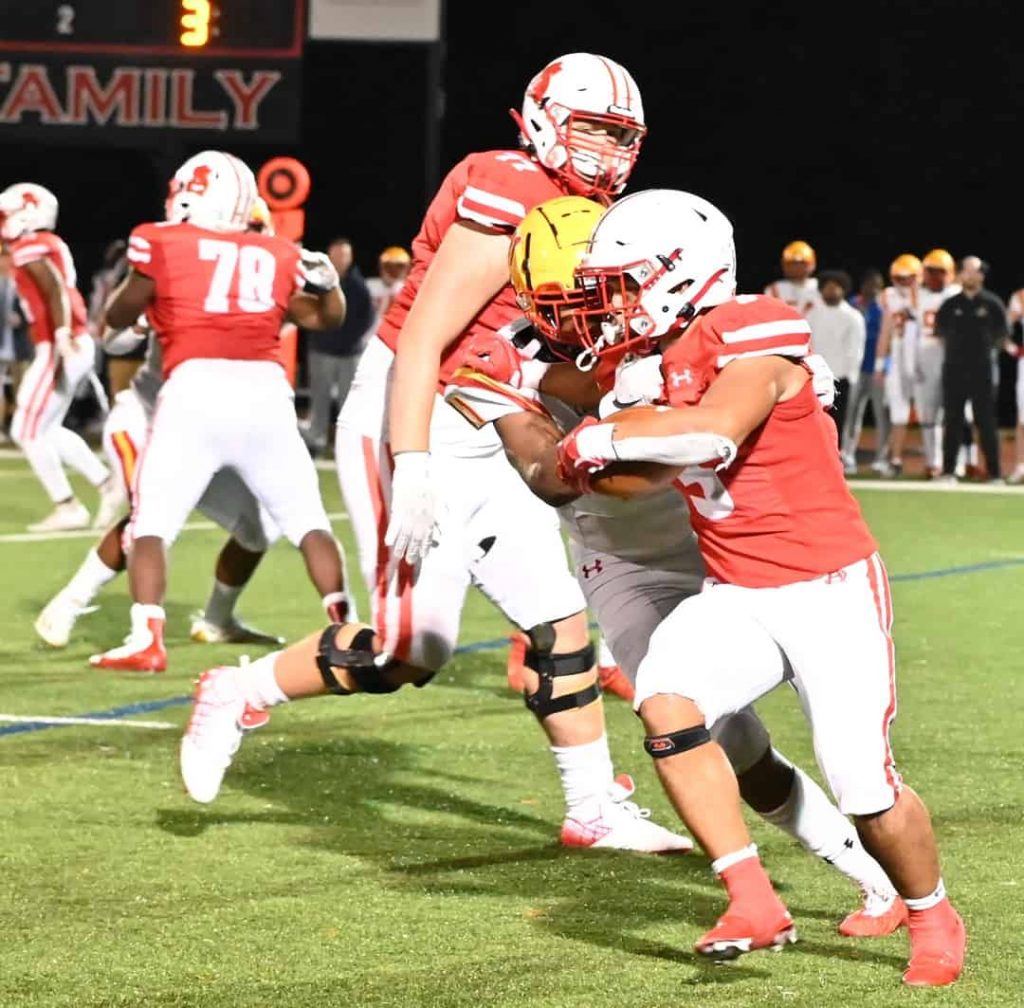 Spalding running back Jordan Harris (right) tries to break free from Calvert Hall’s Daniel Owens during Friday evening’s MIAA A Conference football game. Harris finished with 126 yards and two touchdowns as the No. 2 Cavaliers scored the first 37 points en route to a 37-14 victory over the third-ranked Cardinals in MIAA A Conference action in Anne Arundel County. (photo – Laurie Butts)

No. 2 Spalding handled No. 3 Calvert Hall College, 37-14, in a MIAA A Conference match of unbeatens at Whittles Field in Severn. Senior running back Jordan Harris rushed for 126 yards and two touchdowns for Spalding, and quarterback Nick Guiterrez ran for a score and threw for another.

There was no letdown Friday.

“I’m really proud of our kids,” said Schmitt. “We missed some opportunities early, played some field position. I thought our defense was in good shape and once we got it rolling, it turned quick.”

“This was a statement game,” said Harris.

After fumbling on the opening kickoff (Spalding recovered), Harris (24 carries) bullied the Calvert Hall’s defense, scoring on runs of 2 and 5 yards. Guiterrez added a 5-yard touchdown run and tossed a 22-yard strike to senior Teagan Brown.

“We’re really good with our outside backers Kellen (Wyatt) and Jason (Robertson) and our two Lavin (Scruggs) and Mansoor (Delane) are Division I players who are playing at a really high level,” said Schmitt. “We’re tackling really well…we’ve eliminated the big play, other than the one they (Calvert Hall) got tonight.”

After Spalding’s offense failed to convert on fourth down in the red zone on its first two drives, its defense produced the first points Friday. Robertson and twin brother Jalen swooped in to drop Cardinal running back Dawon Dorsey in the end zone for a safety.

Harris returned the free kick 30 yards to Calvert Hall’s 41-yard line. Guiterrez, who threw a 33-yard pass to Ian Ver Steeg on the first play, capped a three-play series with a 5-yard run, presenting the Cavaliers with a 9-0 advantage late in the first quarter.

In the second, Harris completed an 8-play, 43-yard drive with a 2-yard run, and scored from 5 yards to conclude a 7-play, 61-yard series as Spalding led 23-0 at intermission. The Cavaliers opened the second half with a 67-yard drive, capped with Guiterrez’s strike to Brown.

“We were just disciplined…it’s repetition, over and over,” said Harris, who had six runs of 10 or more yards (Spalding had 15 plays of 10-plus yards). “The blocking schemes are there, I follow the blocks, then I hit it.”

Harris’ understudy, Hakim Simms, hit the end zone from 2 yards, starting a running clock with 2 minutes, 53 seconds remaining in the third quarter. The Cardinals (4-1, 1-1 MIAA) stopped it as Donnie Lewis hauled in Noah Brannock’s slant pass across the middle and sprinted 78 yards to the end zone on the first play of the fourth.

Brannock (15-of-21, 246 yards) threw for a 26-yard score to Rahkeem Smith late in regulation. It was too little too late for the Cardinals, who managed 52 yards in the first half.

Calvert Hall coach Josh Ward said his team struggled with depth Friday with a quarter of the roster not available Friday because of COVID-19 protocol and or injury.

“When you’re out there 50 plays in the first half, it’s draining,” said Ward. “We were beat up, but Spalding is a heck of a team. They’re the team to beat right now.”

The Cavaliers, who’ve beaten league foes St. Vincent Pallotti and Calvert Hall by a combined 85-14, are setting the pace in the MIAA A title chase. Spalding has a non-league challenge with Malvern Prep (PA) for Homecoming next weekend at Whittles, before travelling to No. 5 McDonogh School (Oct. 15) and Gilman School (Oct. 22) in MIAA A play.

“We’ve developed a bit of a mantra, ‘Winning is fun,’ and there’s a lot of distractions out there,” said Schmitt. “Ultimately, we keep the main thing the main thing and that’s Friday night. We got great senior leadership, a bunch of guys who are not satisfied with being 6-0.”