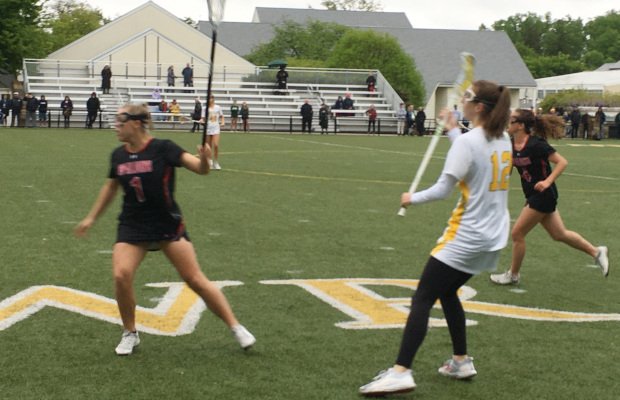 No. 5 Bryn Mawr tops 7th-ranked Spalding to move on to the IAAM A Conference lacrosse semifinal round against Glenelg Country next week

Both lacrosse teams had something to cheer about after No. 5 Bryn Mawr defeated seventh-ranked Archbishop Spalding, 13-8, in an IAAM A Conference quarterfinal in rainy North Baltimore on Friday afternoon.

With the win in coach Molly Wolf’s first year at the helm of her alma mater’s program, the Mawrtians advanced to their first conference semifinal since 2013. 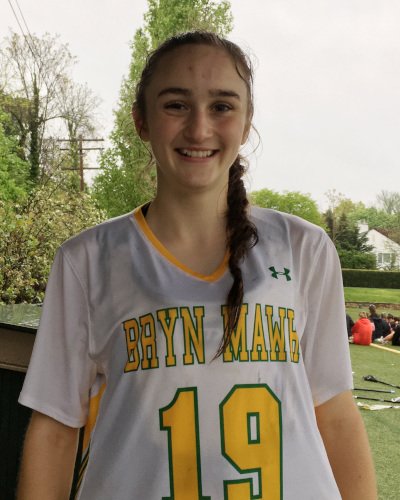 Junior goalie JJ Suriano made a couple of key saves in the early going of No. 5 Bryn Mawr’s 13-8 victory over seventh-ranked Archbishop Spalding in an IAAM A Conference lacrosse quarterfinal triumph Friday afternoon. The Maryland commit finished with 11 saves as Mawrtians earned the right to meet No. 1 Glenelg Country in Tuesday’s semifinal round.

The fourth seeds will meet top-seeded Glenelg Country School on Tuesday for the right to challenge the McDonogh-St. Paul’s School for Girls winner next Friday at Tierney Field on the campus of USA Lacrosse in Sparks for the A Conference crown.

Wolf said that she has implemented an entirely new system that is, in part, working well because of the positive influence assistant coach John Webster has had on the offense.

“He has such an impressive mind for offense,” Wolf said.

A one-two punch of junior midfielders Reese Woodworth and Merrill Watson — who scored four goals apiece against the Cavs— gives the offense plenty of firepower.

Hannah Johnson, who did some solid draw work on Friday, is another reliable option for the Mawrtians. The senior midfielder scored seven times in a win over Spalding last week.

Junior goalie JJ Suriano set the tone in the early going by making two of her game-high 11 saves.

“I had two (saves) right off the bat,” the Maryland recruit said. “I like to get a couple of saves under my belt and it helped me get some momentum.”

She praised defenders, such as senior Olivia Matlaga, junior Francesca Polito and sophomores Lexi Reber and Madi Carroll for making her job easier.

“JJ was ready,” Wolf said. “She was standing on her head (in the first half). We’re ready to go for Glenelg (Country).”

Despite the loss, the Cavaliers (13-4, 10-4) proved to themselves that a subpar 2021 campaign was an aberration rather than a new tradition.

Spalding coach Tara Shea said that this season was “a lot about getting back to where we should be.”

Considering that the Cavaliers are the only team to knock off Glenelg Country this season and that they opened the campaign by beating traditional power Notre Dame Prep, Shea knows that her hard work to revive the Cavalers’ fortunes has not gone in vain.

“This group of kids really got us back on track,” an emotional Shea said after the game. “Last year was a shaky season, but this year we had a strong senior class for a team that should get credit for a buy-in. And we should be strong next year because we had six sophomores and one freshman starting — and we lose only two senior starters. We’re young and we’re going to get better.”

Six of Spalding’s goals were scored by underclassmen — two each by sophomores Lily Mullen and Gabby Greene and freshman Maeve Cavanaugh — while senior Bella Saviano also netted a pair.

Pictured above: Archbishop Spalding sophomore midfielder Gabby Greene (left) and senior defender Olivia Matlaga watch the ball after Matlaga’s pass sails toward a Bryn Mawr teammate in the first half of the Mawrtians’ 13-8 victory Friday afternoon in the IAAM A quarterfinals.