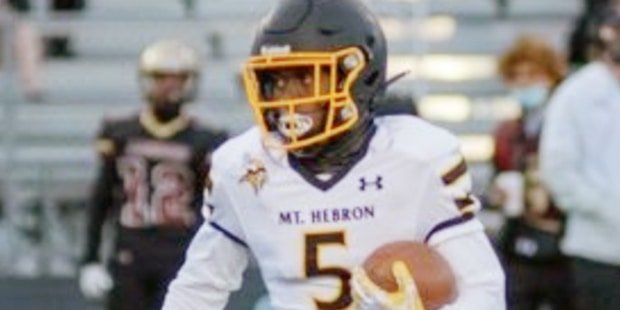 Kameron Wilson-Anderson rushed for three touchdowns and Mount Hebron dominated from start to finish in a 39-0 shutout of Howard, Friday evening in Ellicott City.
The Vikings also got two touchdowns from their defense, including a 30-yard fumble return for a score by Lukas Van Jones, with 8 minutes to play in the opening quarter.
Wilson-Anderson took over in the second quarter, scoring on runs of 6 and 14 yards to give Mount Hebron a 21-0 lead at the half. Wilson-Anderson added a 9-yard TD run in the third quarter.
The Vikings topped things off with a pick-six and another rushing score in the fourth quarter as they improved to 3-2. Howard dropped to 2-3.
Pictured above: Mount Hebron’s Kameron Wilson-Anderson.