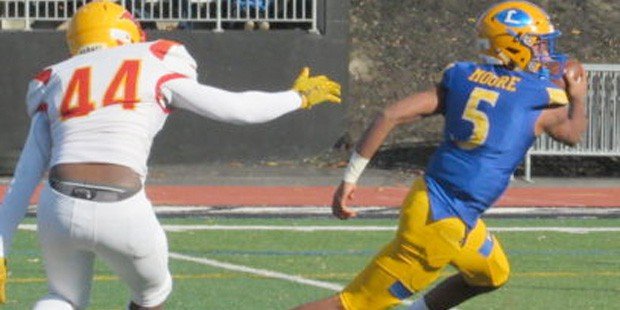 After a century of a continuous rivalry, Calvert Hall and Loyola face uncertainty regarding the storied series

The coronavirus pandemic that has plagued the U.S. since last winter and claimed nearly 200,000 victims is also wreaking havoc on high school sports in a big way.

In the case of the MIAA/IAAM, league officials and school heads are abiding by the original plan first announced in a joint statement in August that there would be a postponement of the fall sports season with a promise “to reassess circumstances in early to mid-October.”

According to MIAA executive director Lee Dove, nothing has changed in that regard.

“Our member schools would like to see a return to play as soon as possible,” Dove said on behalf of the MIAA. “The status of the COVID-19 virus and the level of confidence and preparedness by our member schools, as they prioritize their goal to return students to campus, must be realized before interscholastic sports can safely resume.”

He added that, “We continue to examine the possibilities before us to accommodate all three sport seasons. The potential for a start date this fall would provide us with the ideal option, but as that cannot be guaranteed as of this time. Alternative considerations are also in development to meet our efforts to ‘let kids play’ at some point during this school year.”

That measured approach to the situation reflects the most recent MIAA statement.

“We all share in the desire to return to the competitive arena as soon as it is safe to do so,” the statement reads “…the MIAA exists to serve at the direction and support of our athletic directors and school administrators. With our member schools each in various stages of the reopening process, the concept of trying to resume interscholastic sports at this time is not feasible.”

While acknowledging that sports activities have resumed “for other entities and in other states,” the statement said that the MIAA is “not yet prepared to take that step.”

And that leaves the viability of the 101st Turkey Bowl up in the air and the hopes of players, parents of players and fans of arch-rivals Calvert Hall College High School and Loyola Blakefield in limbo.

So far, officials from the cross-Towson all-boys Catholic schools have not met to decide the fate of the traditional gridiron battle that has been played every year since 1920 and featured on Thanksgiving annually since 1929.

Research shows that the first Calvert Hall-Loyola football game was played in 1899 and the second in 1904, although neither one is counted in the all-time series record.

Moreover, because the teams split those early games, the Dons’ 49-43-8 overall lead would not be altered in what is believed to be the oldest continuous football rivalry between Catholic high schools in the U.S., surviving the Great Depression and World War II — among other notable historical happenings in the past century.

The most storied prep rivalry in the Baltimore area has become a Thanksgiving morning staple in Charm City and environs, in part because the annual grudge match has been televised for decades by WMAR-TV and was broadcast on radio by 105.7 The Fan for the 100th edition.

For those reasons and for the sake of tradition, every attempt will be made to play the game, even though there are still many hurdles standing in its path.

“We will follow all MIAA guidelines,” said Brother John Kane, Calvert Hall president. “The hardest part is not knowing what’s coming next. But I think if it fell within the right framework, it could work out.”

Kane went on to say that the coronavirus shutdown happened at just about the same time last March when contracts were about to be signed to stage the game at Towson University, where 11,200 fans packed Johnny Unitas Stadium to watch the Cardinals prevail, 33-10, in the 100th game last November to earn their 10th win in the last 11 games against Loyola.

With such a large crowd in mind, the thorny issue of where a game drawing that many fans could be played has to be addressed during a time when crowd-size restrictions have been implemented, even if the game would be green-lighted by the MIAA and the two schools.

And finding such a suitable venue in time for Thanksgiving would be tricky at best.

“This might be an asterisk year, because the game might not be played on Thanksgiving,” Kane cautioned. “But we’re not there yet. We have to see how things work out — and things can change hourly, daily and monthly.”

His Loyola counterpart, Anthony Day, agreed that the game is unlikely to be played on Thanksgiving, unless a change is forthcoming from the MIAA.

Although an informal proposal to play a flag football game in lieu of using regular rules applied to tackle football has been informally offered, it has yet to be considered by school officials.

Day said that the loss of the Turkey Bowl would be a “void in my own personal life,” given that his two sons are Loyola grads and his family, for obvious reasons, cares deeply about its continuation.

“There’s a real sadness to it,” he said. “We’ll just roll with it as best we can. But the most important thing is the health and safety of the school community.”

The fact that all Loyola students are taking classes remotely and only 25 percent of Calvert Hall students attend classes in person makes the situation even more difficult from a logistical standpoint.

Even if the season would open by late October, getting players ready for the physicality of the sport could be another obstacle.

Having no contact drills in September after a summer without practice sessions makes the potential for an unusual amount of injuries as well if players aren’t given enough time to get used to the bumps and bruises associated with blocking and tackling.

“Usually, it’s a four-week process,” Loyola coach Anthony Zehyoue said about preparing for the season. “It would be a challenge, but maybe we could do it in three (weeks).”

On the other hand, he said that the prospect of not playing the Turkey Bowl stings.

“I’ve been with the seniors since my first year coaching here,” he said. “My seniors really want to play, and all the players are always talking about the Turkey Bowl. It’s constantly on their minds.”

That said, Zehyoue is less than enthusiastic about the possibility of playing Calvert Hall in the spring, citing two reasons.

“First, if a kid gets injured in the spring, he wouldn’t have much time to recover (if the football season starts on time in the fall of 2021),” he said. “And we have a lot of multi-sport athletes here at Loyola, and there would be too much overlap of the seasons. It could force kids to make a choice between sports — and that would limit their opportunities. And playing two seasons in one calendar year is putting a physical strain on the bodies of football players.”

Calvert Hall coach Josh Ward, who played in the 2002 and 2003 Turkey Bowls for the Cardinals, is hoping to coach against the Dons for the first time since landing the job vacated by Donald Davis.

“Taking over the program in a coronavirus year has been a unique experience,” he said, noting that his team has been doing non-contact drills for a couple of weeks. “We’re only allowed to have the kids on the field on the days they’re in school, except for Saturdays (which is a full-team event).”

Ward said that he has heard from several sources in the school community about the importance of the game.

“Obviously, we want to play, whether it’s the first game, in the middle or the end of the season,” he said. “We’ll have an acclimation period and then we’ll follow whatever guideline we have to in order to get ready. Having played in the game myself, and having all the kids, alumni and teachers talking to me about it, I know how important it is.”