Widener, Westminster too much for No. 4 Mount Hebron

No. 1 Owls advance to 3A state volleyball elite eight behind senior standout 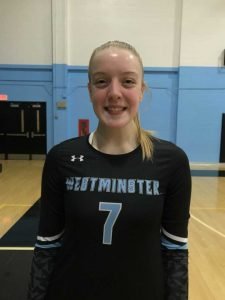 Jilienne Widener was again the driving force for Westminster volleyball Wednesday. The Brown University hitter finished with 27 kills as the No. 1 Owls defeated fourth-ranked Mount Hebron in four sets to advance to the Class 3A state quarterfinals.

Mount Hebron High’s volleyball team challenged No. 1 Westminster in every game of Wednesday night’s Class 3A East Region I final. The fourth-ranked Vikings just had no answer for Jilienne Widener.

Owls senior Widener pounded out 27 kills — including 12 in the final set of a 28-26, 25-18, 25-18 Westminster victory. Arguably the best player in the Baltimore area, the 6-foot outside hitter had 35 kills in Monday’s four-set win over Centennial.

In each set Wednesday, as the Vikings rallied to within a few points or to take the lead in the third, Widener sparked the host Owls (16-0) to victory.

“We’d come back and then she’d come back in the front row and it was hard,” Mount Hebron coach Tina Catanach said. “She’s a great player. The height at which she hits — she just overpowers. Even on a closed block, she can go up and around. She’s smart and she just knows where to swing. She’s the next level of player and we haven’t seen anything like that.”

Early in the match between the Carroll County champion Owls and the Howard County champion Vikings (13-3), Mount Hebron had a lot of success with their blocking, a key factor in their win over No. 6 Marriotts Ridge Monday night.

The Vikings rallied from six points down in the first game to eventually tie the Owls at 20. The set was tied three more times, but back-to-back kills by Morgan Amos gave Mount Hebron a 25-24 lead. Widener then tied it. The two teams traded points before Widener had another kill for a 27-26 Westminster edge.

Owls setter Emily Stauder (26 assists) then made a terrific dig to save the point. The ball fell in on the far side of the net to seal a 28-26 first-set win.

Westminster coach Evan Frock said the Vikings were one of the better blocking teams the Owls had played, but Widener adjusted after getting stuffed a few times early in the match.

“One of our managers tells me spots that are open on the court,” Widener said, “so we try to utilize those spots, so he’ll be like, ‘You have doughnut which is the middle of the court open, hit there,’ or the block’s blocking you wide, hit cross, so we talk to each other and especially (libero) Kasey (Thomas), she communicates with me where to hit while we’re on the court.”

For the Vikings, the loss was a disappointing end to a terrific season. Unranked to start, they emerged at the top of a competitive Howard County league behind solid all-around team play.

Amos led Mount Hebron with seven kills while Sara Paradisi and Brenna Sipenko had five each.

“I’m very proud of my girls,” Catanach said. “Of course it’s not the outcome we wanted but at the end of the day, I’m so incredibly proud of my girls that they went out there and they fought and played with heart and character. One team can win and we weren’t that team today, but they showed who they were and they went after it.”

Widener, who’s headed to Brown University next year, said her team had a lot of respect for the Vikings, who have nine seniors on the roster.

“We definitely knew they were a scrappy team,” Widener said. “We had a scouting report on them, so we made sure we were practicing what they were going to run and we were pushing each other. We knew we were going to have to battle for this win, because they are a great team, the champions in Howard County.”

The Owls are one of only three unbeaten Class 3A teams to advance to the state quarterfinals, so they will have a home match Friday or Saturday. The eight remaining teams will be reseeded based on regular-season winning percentage with the pairings for the weekend announced Thursday morning.

Two years ago, the Owls lost in the state title match. Last year, they fell in the regional final (what is now the state quarterfinals) to eventual state champion Atholton, 3-1. Widener had 26 kills in that match.

Now she and fellow seniors Stauder, Thomas and Sarah Anderson, are ready to finish their careers with the program’s first state championship.

“I want it so bad,” Widener said. “I tasted it sophomore year. We were right in that title game. I know what it takes. I’m ready to get that state title.”

No. 1 Owls advance to 3A state volleyball elite eight behind senior standout