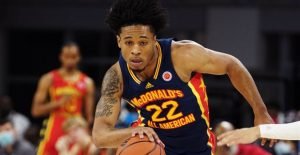 Playing in the McDonald’s All-American game, Whitmore posted a team-high 19 points for the East squad which routed the West, 105-81, in Chicago.

Whitmore, a 6-foot-6 forward, added eight rebounds and five assists in his efforts Tuesday. The Villanova University recruit was the Baltimore Catholic League’s Player of the Year for a second straight season.