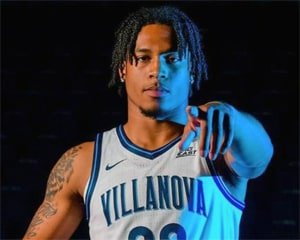 “They treated me like it was family,” Whitmore said on CBS Sports HQ where he announced his decision. “That was a big part: They treated everyone like family.”

Whitmore, an explosive 6-foot-6 forward, pledged to the Wildcats over Illinois and North Carolina. If he signs, Whitmore would be the first local product to the Big East Conference power since Mount St. Joseph’s Phil Booth.

Booth, who was among VSN’s top high school boys players of the past decade, won two national championships at the suburban Philadelphia school and played in a school-record 148 games (128-20). He’s among a handful players in Wildcat history to score at least 1,500 points and hand out 300 assists.

Whitmore was the BCL Player of the Year (first Cavalier recipient since current NBA veteran Rudy Gay in 2004) as a junior in a condensed campaign last season because of the COVID-19 pandemi. He averaged 22 points and 11.7 rebounds as Spalding lost to eventual champion John Carroll School in BCL Tourney semifinals.

“His athleticism and ability to go over people became more prevalent,” said Strickler. “His outside jumper is still a work in progress but will come together in time and he’s improved his ballhandling. I think Villanova being close to home played a factor, but the biggest factor is Villanova with (Wildcat head coach) Jay Wright.”