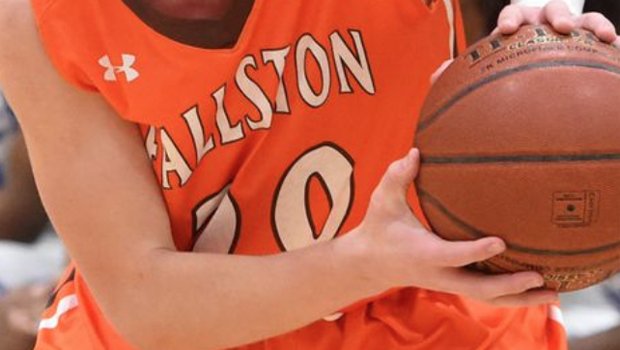 The Fallston boys basketball team won in heart-stopping fashion, Wednesday evening at home, as the Cougars rallied in the final minute of their 2A regional final game with Elkton to pull out a 52-51 victory over the Elks.

Senior Dylan Wheeler, who led Fallston with 17 points and 8 rebounds, made a steal with 30 seconds to play and hit what proved to be a game-winning jumper, with just 8 seconds to play. The Cougars then sealed the victory with a steal by Matt Manolis and celebrated with their fans who rushed the floor in celebration.

In their quest to reach the 2A state quarterfinals, the Cougars jumped out early, taking a 17-4 lead. Elkton, however, went on 16-0 run that eventually batted its way to a one-point half time lead. The game was tight throughout the second half.

With 42 seconds to go, the Cougars missed a potential go-ahead shot, but got a second chance after Wheeler’s steal.

“That was definitely the most intense basketball game I’ve ever been a part of,” said Fallston coach Brian Hulka. “Emotional roller coaster – I’m just so proud of the way we fought from the opening tip against a very good Elkton team. The ending, with no break in the action for the last 50 seconds, was just crazy. I’m still in shock. To get two steals in the last minute to win the regional title was just a dream ending. These seniors have been through so much… missing all of last year and then playing in empty gyms most of this year, I’m just so glad that Cougar Nation got to experience this.”

Fallston will play a state quarterfinal game on Friday with their opponent to be determined after the MPSSAA reseeds the final eight schools.