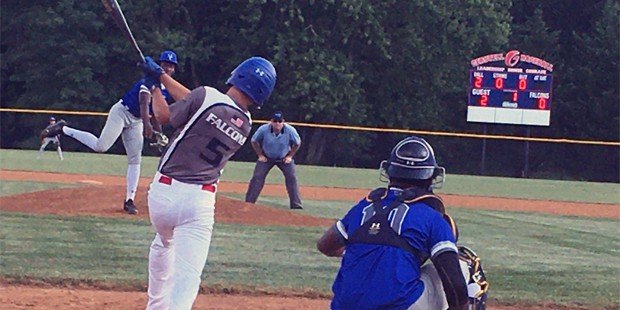 The prep baseball season had barely begun in March when the COVID-19 shutdown was implemented.

Four months and no games later, Our Lady of Mount Carmel and Gerstell Academy players did their best to pick up where they left off by staging a game between the MIAA B Conference rivals Wednesday afternoon in near-perfect mid-summer conditions at Smith Memorial Baseball Field in Finksburg. 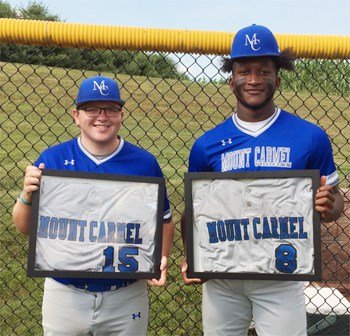 Our Lady of Mount Carmel seniors Connor Naunton (left) and Alex McCoy were presented with keepsake jerseys at a brief ceremony before a Senior Day game against Gerstell Academy in Finksburg on Wednesday. The Cougars won, 12-11.

Designed to be a final sendoff for Cougar seniors Alex McCoy and Connor Naunton and their Falcon counterparts Chris Hagan and Logan Satti, both squads’ underclassmen were also afforded the chance to participate in their first competitive game since the season was summarily shuttered.

The game was the brainchild of Mount Carmel coach Mike Naunton and Gerstell skipper Cap Poklemba, who promised each other back in March that there would indeed be a last hurrah for the aforementioned seniors, all of whom were prepared to play key roles in the teams’ 2020 fortunes before continuing to play in college.

The longtime friendship with Poklemba and Mike Naunton helped to put the plan in motion. 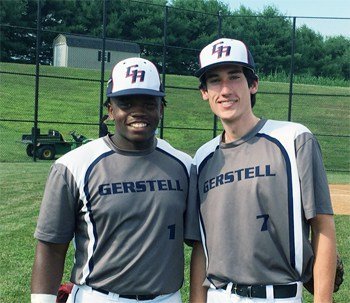 Gerstell Academy seniors Chris Hagan (left) and Logan Satti were honored at a brief ceremony with their parents before a Senior Day game against Our Lady of Mount Carmel in Finksburg on Wednesday.

“Back in March, Cap said that no matter what, we’re going to play one more game,” Mike Naunton recalled. “I said, ‘Yeah, even if it’s in July.’”

At the time, of course, neither imagined it would take that long.

Even so, they were happy to see their players compete again in what turned out to be a come-from-behind 12-11 Mount Carmel triumph.

McCoy, a shortstop/pitcher headed to the University of Maryland Eastern Shore, is, according to his coach, a large and intimidating three-sport athlete and “one of the kindest and most gentle kids you could ever meet.”

In his final appearance as a starting pitcher, he wiggled out of a jam in the first inning by striking out the side after giving up a leadoff double to Daniel Burns and a walk to Graham Vaeth. At the plate, McCoy fanned twice, walked twice, was credited with an RBI and scored once.

“It was very thoughtful of them to put the game together for us,” he said. “It was fun to be back on the field with the guys — and it was good to win. It’s always good to win.”

Naunton’s son, Connor, who reached base in 26-of-27 games last season, showed his ability to make contact in all four of his plate appearances against the Falcons.

He reached on an error that scored the game’s first run in the opening frame, was retired on a grounder to short in the third, smacked a clutch bases-loaded single in the fifth and added an RBI on an infield single in the sixth.

“I don’t strike out too much,”Naunton said after a game in which there were 23 whiffs. “I was looking for a fastball (in the fifth) and just tried to put the ball somewhere where it would score some runs.”

Poklemba’s senior duo is likewise blessed with talent, including Hagan’s hitting and his prowess behind the plate that helped the Falcons emerge from the loser’s bracket to take their first conference crown in 2019.

In a two-game sweep of Boys’ Latin for the title, the Delaware State commit’s strong arm put a damper on the Lakers’ vaunted running game.

“He’s one of the major reasons we won the championship,” Poklemba said.

Hagan showed his long-ball stroke in the fourth inning when he unloaded a rocket shot over the left-field fence that gave Gerstell a short-lived 6-2 advantage.

“I was just looking for a pitch to hit,” he said. “It was there and I took it for a ride. It was really good to get the jersey on for the final time. It was great to have the support of our coaches and the school.”

Satti started on the hill for Gerstell on Wednesday, although Poklemba was quick to note that pitchers would be on a strict pitch count after such a prolonged layoff.

The Lebanon Valley College preferred walk-on was touched for a pair of hits and two unearned runs in the first, although he struck out six in his final outing in just two innings. He also had a double and single in four at-bats.

Some concessions to the virus included physical distancing of fans, players using their own equipment and an umpire calling balls and strikes from the mound. Coaches wore face coverings when visiting the mound.

“We just wanted to give the kids a Senior Day,” Poklemba said before the contest. “We’ll play it as competitively as possible, but in the grand scheme of things, it’s really just about getting the kids back on the field.”