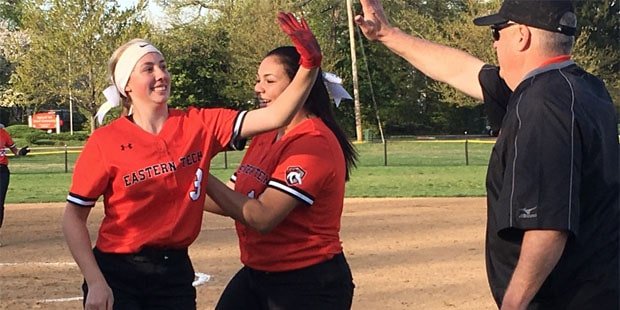 Having already lost to Baltimore County rivals Dulaney and Catonsville, another setback would have most likely disqualified the Mavericks (8-2) from a shot at a county title next month.

Instead, they are back in the thick of things after handing the second-ranked Generals (8-1) their first loss of the season with a combination of solid hitting and Burton’s heroics in the circle.

“We had a big pep talk before the game, so everybody was up,” said Eastern Tech senior shortstop Savannah Bucalo, who knocked in three runs, including the first run of the game. “It’s really hard when you’re going up against an unbeaten team.” 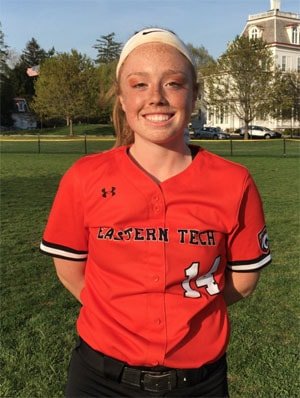 Eastern Tech came out swinging, from center fielder Sydney Edmond’s game-opening double and Bucalo’s single to senior catcher Miranda Burton’s RBI double, the Mavericks proved from the get-go that they would be able to square up some of Towson starter Jessica Leatherwood’s offerings.

Even after Towson answered with a two-spot of its own in the bottom of the first to knot the score, 2-2, on Leatherwood’s RBI single and an RBI double by senior center fielder Emma Kelly, Tech kept pounding away at the plate.

The Mavs jumped back on top, 5-2, in the second on Bucalo’s single that brought home left-fielder Bella Schwing and Edmond before adding another marker on first baseman Abbie Heagy’s single.

Towson cut into the deficit in the second when sophomore second baseman Julie Kallauer knocked in a run on a groundout after junior Amari Lloyd doubled to open the inning and senior left-fielder Sydney Fringer advanced the runner to third on a single.

Tech went up, 7-3, in the third on a double by designated player Lena Wondolowski, a Schwing single and a two-run single by second baseman Emma Tawney.

In the bottom of the third, Towson got the first two hitters aboard on singles by Leatherwood and Kelly, who then pulled off a double steal.

That’s when Mackenzie Burton entered the game with a rise ball that shut down the Generals the rest of the way on two hits, although one run that was not charged to her scored on a wild pitch. She walked just two and struck out six to pick up the win in relief.

Tech scored its final run on a sacrifice fly by Wondolowski with the bases loaded and no outs run the fourth. Leatherwood escaped further damage by retiring Schwing on a popup to short and fanning Liz Wagner.

Yet the Generals only put two more runners in scoring position the rest of the way, first on sophomore first baseman Olivia Ingrao’s booming double to center in the fifth and then after Fringer walked and stole second an inning later.

“She spins the ball really well,” Eastern Tech coach Jack Meyers said about Mackenzie Burton’s repertoire. “And with her sister (Miranda) catching, they have a lot of fun. She has that rise ball and some other pitches that are pretty good.”

Towson coach Jon Salvino said that his hitters have not seen a pitch as effective as the younger Burton’s riser.

“She had our hitters swinging at pitches out of the strike zone that we haven’t gone after all season,” he said. “She was really good.”

The Mavericks will have a chance to make up even more ground in the county race when they meet Patapsco and Perry Hall next week while Towson faces Carver and Catonsville.

Pictured above: Sophomore reliever Mackenzie Burton enjoys a well-deserved high-five from Eastern Tech coach Jack Meyers as teammate Lena Wandolowski rushes toward her after the right-hander shutout Towson over the final five innings of an 8-4 victory Thursday afternoon.