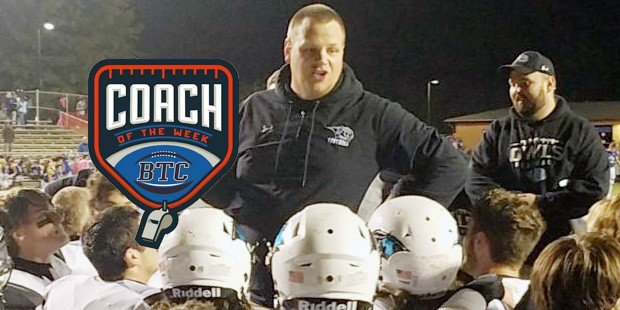 Former Francis Scott Key and West Virginia gridiron star, as well as long-time McDaniel College assistant, has led his Owls to the Carroll County title in his first season

In his first year as head coach at Westminster High School, Chris Bassler has led the Owls to the County championship.

Bassler understands the importance of football in Carroll County. He graduated from Francis Scott Key in 2003 and went on to play at West Virginia University. At the conclusion of his playing career, he joined the football staff at McDaniel College where he spent 11 years (seven as offensive line coach and four as offensive coordinator), before accepting the Westminster job last summer.

“Anytime you get the opportunity to play in an championship game it is really special,” said Bassler of the battle against Liberty. “We have a ton of respect for the program at Liberty and they have definitely become our biggest rivals. So it was very special for our guys and our staff to win that game and ease some of the pain from last year’s loss.”

In building their championship season, Bassler said the team has focused on the basics.

“We have really tried to put an emphasis on dong the little things right all the time,” he said. “We preach to our guys to not be selfish in their responsibilities and run to the ball. Our staff has tried very hard this year to create a culture of accountability, discipline and physical play and our guys have really bought in and embraced it.”

To be honored by the Baltimore Touchdown Club also has special meaning to Coach Bassler.

“It is a great honor to be recognized by the BTC. I had the great privilege as a player to play in the BTC all-star game, participate as a scholar athlete and be a member of the Super 22 team. I saw first hand all of the wonderful things this organization does for football in our area and now to be recognized as a coach is kind of a full circle moment for me and is very special.”

As a long-time assistant coach, Bassler also values the work and dedication of his staff.

“Ad Potts is our defensive coordinator and assistant head coach. He is my right hand and an incredible motivator and someone I can really count on. Jim Stull runs our offensive line. He is one of the best teachers of the game I have been around and really helps establish the physical style of offense that we run.

“Garrett Bean (wide receivers) is an incredible teacher and young football mind who does a great job relating with our kids. Mike Bellew’s (special teams/linebackers) guidance of or special teams has really given us an edge and helped us play with a real advantage in every game. Marlon Jordan’s defensive line has been the bedrock of the success we have had on defense this year. Jared Staub (offensive line/tight ends), a former player of mine, is a great fundamental teacher and role model for our players. And, Isacc Murray (running backs/defensive backs), also a former player of mine, has helped to spear head our ground game which has gained over 2,000 yards this season.”

Bassler also shared his thoughts on the work of the Baltimore Touchdown Club.

“There is no better organization to help protect and grow our game,” said Bassler. “They have lead the way and provided wonderfully leadership and guidance to all players and coaches in the greater Baltimore area. I am truly honored to be a member and humbled to be named Coach of the Week.”