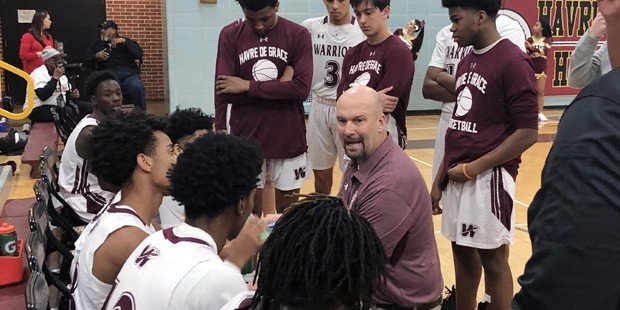 Warriors’ Lewis nets his 1,000th career point in the victory

With his offense struggling midway through the third quarter and his team trailing by eight points in a key UCBAC Chesapeake Division battle, Tuesday, Havre de Grace boys basketball coach Brian Eberhardt turned to his defense for a spark. 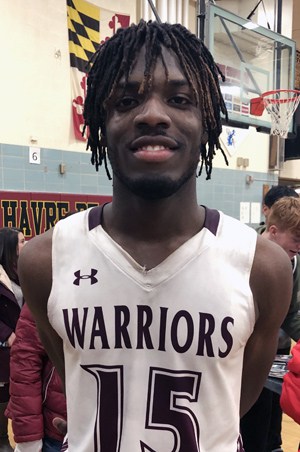 Havre de Grace junior Marlon Lewis scored 15 points, including the 1,000th of his career, in his team’s victory over C. Milton Wright.

The 16th-ranked Warriors scored the final five points of the third quarter and the first 15 of the fourth period – a 20-0 run which paved the way for 62-54 victory. It was the fifth straight win for Havre de Grace (9-2 overall) and allowed the Warriors to remain undefeated in league play (6-0) and in first place.

“We got into a press and we really elevated our defensive play,” said Eberhardt. “That’s what really turned the offense around. We got some easy transition baskets. It was all based on our defense.”

The key force in the 20-0 surge, which flipped a 41-33 C. Milton Wright lead into a 53-41 Havre de Grace advantage, was the play of junior star Marlon Lewis.

Lewis started the run with a free throw and a basket and opened the third quarter with a two-handed, break-away slam that brought the home crowd to life. Lewis scored 15 points, including the 1,000th of his high school career.

Senior guard Josiah Scott also had a big night with a team-high 18 points and junior Nigel Pearson added 13 for the Warriors.

“Marlon is an amazing guy,” said Eberhardt. “He plays at a very high level. If you watch him out here, what is amazing about him is his unselfishness. Realistically, he is probably one of the top players in the state. He could take every shot if he wanted to, but he’s so unselfish, and such a great teammate, he has a number of assists.

“I am so proud of Marlon for what he has accomplished, not only in scoring 1,000 points, but what he has done academically and just growing up and maturing as a young man, I could not be prouder to coach Marlon.”

For his part, Lewis said it is all about a desire to win.

“I don’t like losing,” said Lewis with a huge smile during his post-game interview. “I am going to do whatever I can, within my power, to make sure we win.”

On the topic of scoring 1,000 points, Lewis, who starred at Woodlawn as a freshman before transferring to the Harford County school last season, commented, “It feels great. We put in a lot of work. My work ethic is why I even scored a thousand points and my teammates help me out a lot.”

Both teams started hot, trading leads throughout the opening quarter before a buzzer-beating three-pointer by Pearson gave Havre de Grace an 18-16 edge at the first break. The lead grew to 22-16 early in the second quarter before C. Milton Wight battled to forge a 29-29 tie at the half.

CMW junior Dylan Kutcher hit two three-pointers in the opening quarter and two more in the third stanza, before finishing with 14 points, but he spent long stretches on the bench in foul trouble. The Mustangs missed his ball-handling and outside threat.

Sophomore Jordan Stiemke picked up some of the slack, scoring a game-high 20 points, but the Mustangs did not get much production from anyone else, especially in the second half.

“We had three starting guards all sitting at one time with three fouls,” said C. Milton Wright coach Jon Stefanides. “We hoped we could just hold it, but they hit two quick shots and then took a rebound down there and scored again. The crowd went crazy and my kids just kind of melted.

“I give a lot of credit to the Havre de Grace players and their crowd. There crowd pushed them back into this one. When we were up eight, I thought Brian had to come up with something and he did. It was well timed.”

C. Milton Wright (9-4 overall) fell to 3-3 in the Chesapeake Division. The Mustangs are in a four-way deadlock with Edgewood, Elkton and Joppatowne for second place.

Pictured above: Havre de Grace head coach Brian Eberhardt delivers instructions to his squad during a first half break in the Warriors 62-54 UCBAC win over C. Milton Wright.