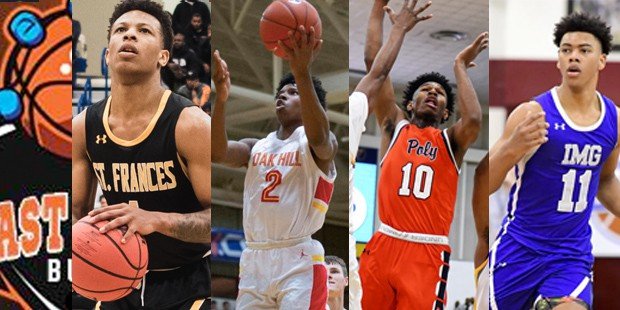 Elite boys hoopsters ready to show out at UMBC Saturday

“If it’s up to me, I want to know who’s the Top 10 teams in nation are and I want all 10 of them,” Brand said during the postgame press conference game.

Brand and the third-ranked Engineers will get a chance to play one of the nation’s Top 10 best teams. Poly will face Florida’s IMG Academy in the inaugural East Coast Bump mixer, Saturday evening at UMBC. No. 2 St. Frances Academy will take on Oak Hill Academy from Virginia, in a matchup of nationally-ranked squads.

The Panthers (29-3 overall), ranked 16th by ESPN and 22nd by MaxPreps, have won eight straight games since a loss at Mount St. Joseph. The reigning MIAA A Conference/Baltimore Catholic League champions have been driven by South Alabama University-bound forward Jamal West, along with last year’s VSN Player of the Year Adrian “Ace” Baldwin and junior post Julian Reese.

The East Baltimore school won’t be phased, playing in one of the top games this week on the nation’s boys hoops landscape. Two of the Panthers’ losses this season were to IMG Academy and Kansas’ Sunrise Christian Academy (10th by ESPN and No. 12 MaxPreps).

St. Frances gets one of high school basketball’s elite programs in Oak Hill. The small Southern Virginia private school has produced some of the NBA’s biggest stars including Kevin Durant and Carmelo Anthony, who started his prep career at Towson Catholic.

With its senior trio of point guard Rahim Ali, forward Justin Lewis and shooting guard Brandon Murray, Poly (17-2) held the area’s top-ranking for eight weeks and garnered its first national ranking, but fell out the polls after losing to St. Frances at Morgan State University a couple of weeks ago. The Baltimore City school hopes to get back into the national conversation, but will have to beat one of the nation’s most talented teams in IMG Academy.

Brand said Monday after Poly’s victory over City College, his team has been focus on the IMG match since it was finalized several months ago.

“These are the games that we feel our program deserve to play,” said Brand. “We’re excited to represent public schools, Baltimore City public schools on a stage like that and show if you support young people in the right way, they can compete with anybody.”