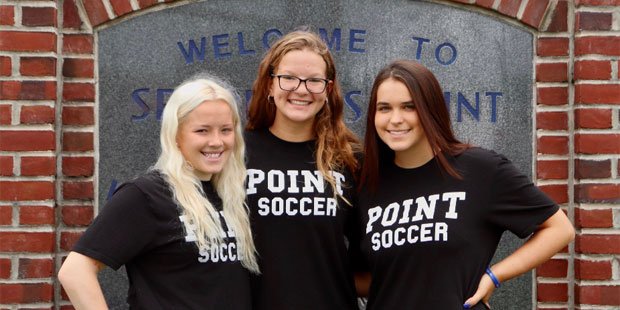 With Jade Weir returning from an ACL tear, Sparrows Point soccer seniors hope for one more shot at another state title

No one on Sparrows Point’s girls soccer team wants to play during this school year more than Jade Weir.

Last fall, the Pointers’ state record string of six state championships ended in a regional final loss. Now, they want to get back to the top, but for Weir, the season would mean even more.

Weir couldn’t finish last season after suffering a torn ACL and torn meniscuses in her right knee. After the injury in early October, she tried to play a few more games and made it halfway through the Baltimore County championship before she knew she couldn’t play anymore.

She had surgery and as her rehab progressed she kept thinking about one thing.

“I was like, ‘I’ll always have next year,’” said Weir, now a senior. “I couldn’t walk for six weeks, but once it started to feel better and I started to gain strength, I worked really hard, because I didn’t want it to happen again and I wanted to play with my team again. I definitely wanted to get one more state championship.”

Weir is trying to stay positive although she said it’s difficult not knowing whether she will get to play soccer her senior year during the COVID-19 pandemic. Baltimore County officials have postponed fall sports as classes are scheduled to begin online next month, but hope remains that the fall sports will be played at some point in the academic year.

Weir, a center-midfielder, had been a critical cog in the Pointers’ game, a defensive minded player always in sync with center backs Abby Meadows and Jaimee Hausner. The three had played together for two years with the Pointers and Hausner played with Weir and Meadows, although at different times, in the Pipeline Soccer Club.

“We just all listen to each other, we trust each other, so I think that has a lot to do with it,” Weir said. “If a ball goes past me, I can always count on them. Ninety percent of the time, they get it. I don’t have to worry about it.”

Jonathan Wynne, a teacher and coach at Sparrows Point for the past 20 years, has taken over the Pointers varsity after leading the girls JV a year ago and he’s counting heavily on the trio of seniors.

“They’re all three very laid back kids, but when they step between the touchlines, they are animals,” Wynne said. “They are fantastic soccer players, aggressive, controlled, strong, smart. Jaimee and Abby were going to anchor our back line … [and] Jade would have been the anchor in the midfield. She runs that show. She’s a bridge from the defense to the offense.”

Add the chemistry between Weir and attacking center midfielder Sara Gruntowicz and the Pointers are tough to beat up the middle.

“Me, Jaimee and Jade are all three really aggressive,” Meadows said, “and we pass the ball and work the ball so well together… With me and Jaimee on defense, Jade is our connection to everyone else. We’ll feed her the ball and she’ll make plays through the middle. Jade normally feeds Sara, and Sara’s really skillful. She’ll beat players up top and just take the ball to goal and finish.” 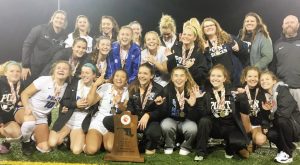 The 2018 Sparrows Point girls soccer team captured the school’s sixth straight state championship, but weakened by season-ending knee injury to Jade Weir, the team could not win a seventh straight in 2019.

Last fall, the Pointers rebounded from an initial 1-0 loss to Notre Dame Prep with six straight wins including five shutouts. On October 1 against Eastern Tech, Weir scored a first-half goal that would stand up as the game winner, but her luck changed in the second half.

“I was making a turn and I just felt something in my knee,” she said. “I went down and I couldn’t get up. I knew something was seriously wrong. I’m the type of player that if I’m injured in any way, I’ll get right back up, so when I couldn’t move I knew it was bad. No one touched me. It was non-contact. I just made a sharp turn and I guess I was unlucky.”

Once she worked through the initial pain, she tried to play in a couple of games, but her knee wasn’t strong enough, so she took two weeks off. She came back for the first half of the county championship against Towson — which the Pointers won in penalty kicks for their fifth title in six years —but the knee gave out again in the second half.

Weir said that’s when she realized she just could not play. After an opening round bye, the No. 11 Pointers (12-2-1) defeated Digital Harbor in the Class 2A North playoffs, but they couldn’t get past the Mavericks in the regional final, falling 1-0.

Hausner and Meadows agreed that Weir was the missing link.

“Jade holds the middle together,” Hausner said, “because she just has so much experience. Not taking away from the other girls, but you can see it compared to the other girls, like how well she just controls that middle part. You could definitely tell there was something missing.”

Losing the flow of the game from Hausner and Meadows through Weir to Gruntowicz left a huge hole up the middle.

“Technically, Jade’s one of the best on the field with the ball on her foot,” said Wynne said, “so losing somebody of that calibre both in matches and training was a huge blow, because we lost one of our most gifted technical soccer players and then tactically she did a wonderful job of distributing and putting the ball where it would need to be or slowing things down or speeding things up.”

If the Pointers get their chance at another state championship, Wynne will be happy to have Weir, Hausner, Meadows and Gruntowicz back on the field. The four seniors are the only players left from Sparrows Point’s 2018 state championship team. Weir and Meadows also played on the 2017 title team.

They’ve all been able to play with their club teams this summer — Weir and Hausner with Pipeline and Meadows and Gruntowicz with Baltimore Union — but they say there’s nothing like playing for their high school team. Sparrows Point, in southeastern Baltimore County, has a small town feel and the Pointers get a lot of spectators, especially at their state championship games.

“High school soccer is my favorite team to play with,” said Weir, who has been cleared for small-sided games and should be up to full speed soon.

“I like to win and we’ve always won and it’s just going with that team to the state championship, having a bunch of people in the crowd cheering for us. It’s really a cool experience when you have a lot of people watching. I definitely want to get one more state championship.”

Pictured above: (from left to right) Seniors Abby Meadows, Jaimee Hausner and Jade Weir make up the heart of the Sparrows Point defense and hope for a chance for the Pointers to reclaim the state title they lost last year after winning a state record six in a row.