Potomac denies No. 11 Milford Mill in 2A state football quarterfinals 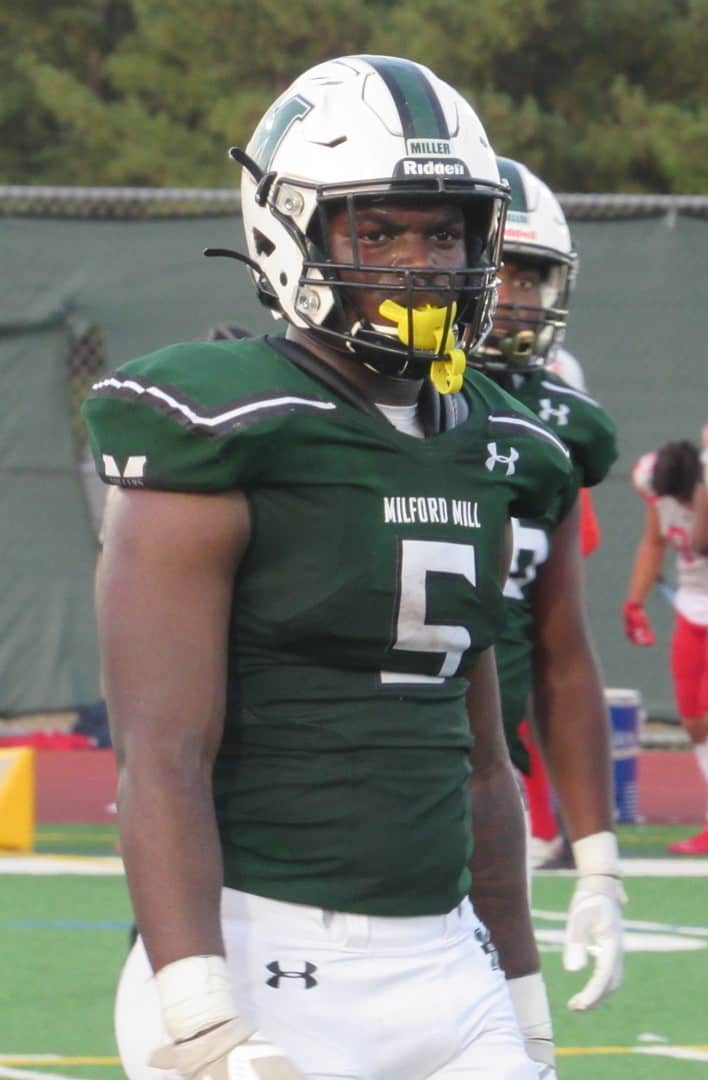 Jordan Morant had a touchdown Friday evening for Milford Mill Academy, but it wasn’t enough as Prince George’s County’s Potomac ended the 11th-ranked Millers’ season with a 33-26 decision in a Class 2A state football quarterfinal in Baltimore County.

In Friday night’s Class 2A state football quarterfinal, Milford Mill Academy went back and forth with a mirror-image Potomac team, but in a game of big plays, the Millers could not orchestrate the final one they needed.

Potomac quarterback Dominique Anthony’s fourth-down scoring pass to Amaree Beynum with 4:49 to go held up for the game winner as the visiting Wolverines, from Oxon Hill, defeated the No. 11 Millers, 33-26.

“This one hurt a little bit,” Milford Mill coach Reggie White said. “Good team vs. a good team and we both executed and showed out. That No. 2 (Maryland-bound running back Corey Dyches) is something special for them, but our kids will learn from this. It’ll sting for a while, but they’ll get better.”

The Wolverines (11-1 overall) advance to meet the winner of Saturday’s semifinal between top-seeded Douglass-PG and New Town in next weekend’s state semifinals. The title game is scheduled for Dec. 7 at 7 p.m. at Navy Marine Corps Memorial Stadium in Annapolis.

Friday’s game featured plenty of excitement as Anthony and Milford Mill quarterback Rishon Holmes showed off their ability to come through in the clutch. Four touchdowns were scored on fourth down, three by Potomac.

Anthony completed 12 of 23 passes for 252 yards and four touchdowns. The senior headed for Old Dominion came into the game averaging 226.7 yards and had thrown for 2,494 yards this fall.

Holmes was 10-for-17 for 196 yards and one passing touchdown. The junior, who completed nine of his first 10 passes, averaged 118 yards passing with 1,306 total passing yards heading into the state quarterfinal.

It wasn’t just Holmes’ passing ability that concerned Potomac coach Ronnie Crump as the Millers quarterback ran for two touchdowns. On his second scoring run, for 11 yards, Holmes broke three or four tackles to give the Millers a 20-15 lead at halftime.

“Their quarterback is dynamic,” Crump said. “Our objective was to tackle him and not hit him. On the tackle, he was so hard and so slippery that we didn’t do a good job tackling. We probably missed about 30 tackles tonight. That’s really not like us to miss that many tackles, but we very rarely play a team that dynamic.”

In the end, however, the Wolverines relied on their “X factor,” senior receiver Beynum, to come up big late in the game.

Through the early going, Anthony threw more to Dyches, who caught eight passes for 133 yards including a second-quarter touchdown. Beynum, however, took advantage of all the attention the Millers paid to Dyches.

Beynum caught just three passes but all were touchdowns, totaling 65 yards. Twice, he was wide open when Anthony found him in the end zone. Two of his touchdown catches, in the final 13 minutes of the game, came on fourth down.

On the play before the game winner, Anthony was tackled in the backfield by Makai Booker and Demetrius Price for a one-yard loss. The Wolverines then took a time out to set up the scoring play and Anthony found Beynum open on the left side of the end zone for a 15-yard touchdown.

Crump said throwing to Beynum was a big part of the game plan all along.

“I told Amaree Beynum at the beginning of the week he was going to be the X factor in this game,” Crump said. “We have a lot of receivers in our program, including one dynamic receiver that’s going to Maryland, but I told him, ‘You are the X factor.’ I said, ‘(No.) 6, you’ve got to make plays this night,’ and I told him he came up big. Sometimes kids don’t believe. We went down in the (postgame) huddle and he was like, “Coach, you was right.”

The Millers (10-2) maintained their halftime lead until late in the third quarter.

The Wolverines opened the half with a 30-yard field goal from Xavier Gwinn, his second of the game. Holmes then tossed a short pass to Kobe Roberts, who slipped a couple of tackles and broke away for a 73-yard touchdown run. The conversion pass failed but the Millers led 26-18 with 3:26 left in the quarter.

Anthony answered with the second Wolverines touchdown on fourth down. He hit Beynum for the 27-yard scoring pass and then Dyches caught the conversion to tie at 26 with 1:35 left in the quarter.

The Millers went three-and-out to open the fourth quarter, thanks in large part to a Wolverines sack that cost Holmes 18 yards.

Potomac then put together a 66-yard scoring drive that lasted nearly six minutes and resulted in Beynum’s game-winning catch. Gwinn added the extra point for a 33-26 lead.

“It just comes down to making the plays and they made more than us,” White said. “Hats off to them and their staff. We had some breakdowns, but we have some athletes who can make some stuff happen from those breakdowns. That’s not the way you want to score, but you take it.”

Holmes also set up all three of the Millers rushing touchdowns with big pass plays.

He opened the drive on his 5-yard touchdown run late in the first quarter by lofting a throw over the shoulder of Corey McCormick, who ran down the left sideline for a 43-yard gain.

Almost four minutes into the second quarter, Tyree Sheppard lunged to grab a low 14-yard pass that led to Jordan Morant’s 5-yard touchdown on the next play. About seven minutes later, Holmes connected with Keyshawn Silver on third-and-31 for a 20-yard gain before the elusive quarterback ran 11 yards on fourth down to give the Millers their halftime lead.

The loss ended the Millers’ bid for a second state championship to go with their 1987 title when White played on the team. Two years ago, they came as close as they could to another title, falling 28-27 to Linganore in the Class 3A final. Last fall, the Millers lost to eventual state champion Franklin in the first round of the 3A playoffs before moving to Class 2A this fall.

The Wolverines are aiming for their third state title to go with Class 2A championships in 2004 and 2005.

Potomac denies No. 11 Milford Mill in 2A state football quarterfinals