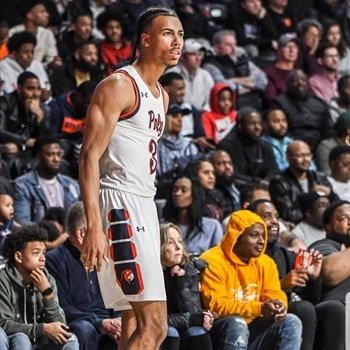 Varsity Sports Network joins the Baltimore basketball community in mourning the loss of former Poly boys basketball player Ian Wallace.
Wallace, 19, was killed in a car accident Thursday evening in Baltimore County. He graduated in 2020 from Poly where he played on three Class 3A state and two Baltimore City championship teams.
Former Engineer coach Sam Brand said Wallace was the “consummate teammate.”
“A lot of people aspire to be the best shooter or best passer or defender, Ian was about being the best teammate,” said Brand, who stepped down as coach earlier this year. “He created positive energy.”
After graduating from Poly, Wallace, 6-foot-7, spent one year at Mount Zion Prep before enrolling at Morgan State University this fall.
Wallace’s biggest moment at Poly came in his junior season against No. 2 St. Frances Academy. With the fourth-ranked Engineers trailing by nine points with about four minutes left in regulation, Wallace capped a furious comeback with a 3-pointer with 18 seconds left giving Poly a 59-58 victory in front of nearly 3,000 at Towson University’s SECU Arena.
Brand said Wallace switched his from basketball to clothing. He and former Poly teammate Josiah Lamothe started a clothing line called “Forever Evol.”
“He realized he was more than a basketball player,” said Brand.