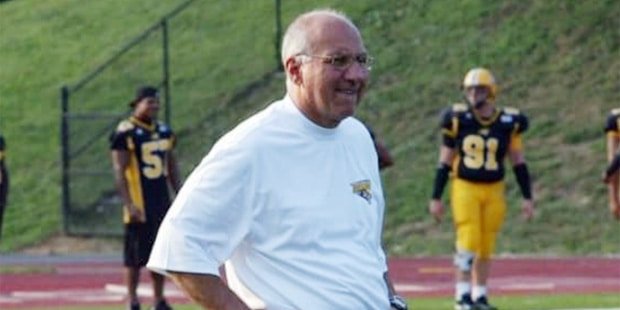 Varsity Sports Network joins the local sports community in mourning the recent passing of former Towson University head football coach Phil Albert, a mentor to many high school coaches in the Baltimore area as well as a former assistant coach at both Calvert Hall and Boys’ Latin School.

Social media filled up Wednesday morning with tribute posts from former players and colleagues as the news of Albert’s death began to trickle out. He passed away on Wednesday after a brief bout with cancer.

Prior to becoming the second head coach in the history of Towson’s program, at the age of 28, Albert played collegiately at the University of Arizona.

Albert served as head football coach at Towson University from 1972 through 1991, posting a career record of 117-91-3. In 1974, his Tigers went 10-0 and won the Mason-Dixon Conference, the school’s first football championship ever. In 1975 the program became an NCAA Division III independent and, in 1976, went 10-3 in reaching the NCAA Division III Championship Game, known as the Amos Alonzo Stagg Bowl. Before more than 7,200 fans in Phenix City, Alabama, the Tigers lost, 31-28, to Saint John’s College of Minnesota.

In 1979, Albert oversaw the team’s move into Division II football and the team went 9-1. His Tigers won 34 games between 1983 and 1986 and went to the NCAA Division II playoffs three times, reaching the quarterfinals twice and the semifinals in 1984. In 1987, the program made the rise to NCAA Division I-AA, with Albert still at the helm. The program’s best season under him, at this level, was a 5-5 mark in 1988.

During his time at Towson, Albert earned Coach of the Year honors five times and coached 28 All-Americans as well as four players who would go on to play in the NFL. He was inducted into the Towson University Athletic Hall of Fame in 1994. Albert also made his mark in the NFL, working from 1994 to 2001 as an advanced game day scout with the San Diego Chargers.

After leaving the Chargers, Albert returned to Towson and served two seasons as the offensive coordinator under Gordie Combs before retiring from coaching. Only thing is, he did not retire. He returned to the sidelines two different times, serving as an assistant coach at both Calvert Hall (2001 & 2002) and Boys’ Latin (2009 & 2010).

“Everything,” was the response from former player Joe Lizana, currently an assistant coach at Gilman School, when asked what Phil Albert meant to him.

“Of course he was a great coach, but he was just a great dude,” added Lizana, who played for the Albert’s Tigers in 1985 and 1986. “Everybody, and I mean everybody that played for him, it was life changing and impactful. I know that is what everybody says about someone when they pass away, but with him it was true.”

Sean Murphy, who coached for more than 20 seasons at Archbishop Curley before moving to North Carolina where he serves as head football coach and athletic director at John Paul II High School, expressed similar feelings.

“He was instrumental in me deciding to become a coach,” said Murphy, one of Albert’s All-American selections. “I learned more lessons from him in four years as a player than any professor, class or textbook during my academic career.

“After football was finished, I learned from Coach Albert the importance of faith and service to others. He was a man of the highest integrity, a man of faith, role model, mentor and someone that helped me become the person I am today. I have never been around a person with such positive energy and the ability to uplift and inspire even after a brief conversation. I relished seeing him in person and thoroughly enjoyed my conversations with him over the phone. So blessed to have played for him and so blessed to have known him. He may be gone, but his spirit and his lessons will remain in all of us. He was the best.”

Jim Sandusky, who also played for Albert and later coached with him at Boys’ Latin, spoke to the coach’s success as a leader.

“Coach was successful because he cared about the person, not simply the player,” said Sandusky. “We played for him, the person, not the coach. He was a life mentor for so many of us. He was as talented a coach as you would find at any level, and as passionate as he was about football what he really cared about was his guys . His concern for us didn’t end when we graduated, he stayed invested in so many of our lives until he passed yesterday. Heartbreaking.
“He never deviated from his beliefs. The man had conviction and held true to his beliefs….an exemplary coach and person. We all loved that man.”