NDP’s Friedman and Borzymowski share VSN Field Hockey Player of the Year Honors; C. Milton Wright’s Mattingly is the 2018 Coach of the Year

Varsity Sports Network is proud to introduce our 2018 Field Hockey Players and Coach of the Year. Nathalie Friedman (far right) of IAAM A Conference Champion Notre Dame Prep, who was our 2017 Player of the Year, is sharing top billing this year with her close friend and teammate Rachel Borzymowski (left), as our 2018 Co-Players of the Year, while Kelly Mattingly, who guided C. Milton Wright to the Class 3A state championship, is being honored as our 2018 Coach of the Year.

Please enjoy our honorees’ stories below and the video interviews we did with them. Congratulations Nathalie, Rachel and Kelly.

2018 VSN Field Hockey Co-Players of the Year Nathalie Friedman and Rachel Borzymowski helped No. 1 Blazers repeat in IAAM A Conference

Notre Dame Prep stars Rachel Borzymowski and Nathalie Friedman are not joined at the hip, although the 2018 VSN Field Hockey Co-Players of the Year have been close friends since they began playing field hockey together as nine-year-olds.

The talented seniors’ relationship has grown throughout the years, and has almost a family feel to it.

Their synergy is most scintillating on the field where defender Borzymowski’s power game at both ends of the field and Friedman’s all-around prowess at midfield helped to guide Notre Dame Prep to a 20-1 record and a rare repeat performance as Interscholastic Athletic Association of Maryland A Conference champions. 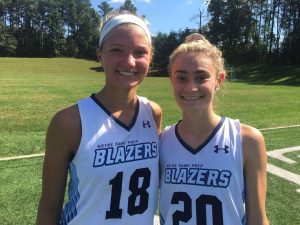 Rachel Borzymowski (left) and Nathalie Friedman were full of smiles during an interview, after leading the Blazers to a another win earlier in the 2018 season.

The last team to do that was Garrison Forest, which three-peated from 2010-2012.

Friedman, the 2017 VSN Player of the Year and the first to win two years in a row since Glenelg’s Alyssa Parker in 2010-11, is happy to share the award after another stellar season that was just a game away from perfection for the top-ranked Blazers, whose lone hiccup was a 2-1 setback to No. 9 Arundel that snapped a 32-game winning streak and perhaps even, ever so briefly, shook their confidence.

However, with the burden of maintaining the streak lifted, NDP played dominating hockey down the stretch.

“There was a lot of stress and anxiety, especially because we had been unbeaten (the previous season),” said Borzymowski, who plans to play the sport at Boston University next fall. “But we came back with a new mindset.”

“We had to restructure some things,” noted Friedman, a Wake Forest commit.

Whatever tweaks coach Katrina Ross and her able staff came up with, they worked so well that the Blazers allowed only one goal over final six games, and that came in a 3-1 triumph over No. 2 Garrison Forest in the A Conference finale.

Meanwhile, the Blazers averaged more than four goals per outing during the final three games of the regular season and all three playoffs contests to finish the season by outscoring their foes by a whopping 121-14.

Borzymowski and Friedman either scored or assisted 90 of those goals, meaning that the duo was involved in a hair under 75 percent of NDP scoring plays this season.

Borzymowski finished with 21 goals and seven assists, good for the third-most points on the team.

Her defensive ability may have been even more critical for the Blazers, according to Ross, who has compiled a 52-6 record and piloted her team to three consecutive A Conference finals in as many years at the helm.

“Rachel is the heart and soul of NDPs team defense,” Ross said. “She is a major reason for that low number (of goals scored against NDP).”

Her ability to dominate on both offensive and defensive penalty corner alignments are especially significant, Ross said.

“A natural leader and communicator, Rachel continued to anchor our DPC unit as a flier and trailer,” the coach said. “More impressively, we called upon her to add to our attacking strategies. Many of her goals came from her prowess on the APC unit from the insert and hitting positions. Rachel is also a top stroker who solidified our championship win with a stroke.”

Friedman’s 25 goals and 37 assists led the champs’ scoring parade while her knack for making big plays in crunch time make her a special weapon.

Proof positive of her value to the Blazers was on display in a taut 1-0 twin over sixth-ranked Archbishop Spalding in a playoff semifinal and verified when she knocked in the go-ahead goal in the championship game as well.

Her career numbers are close to a mind-boggling 67 goals and 70 assists, yet Friedman is hardly a one-dimensional performer.

“Nathalie is the most well-rounded and talented field hockey player in the state of Maryland,” Ross said. “She plays both ends of the field with tenacity and competitiveness that surpasses most in her peer group. While many top players have just one or two skill sets or specialty areas, Nathalie does it all. She can score, she can assist and she plays defense. She is regarded as one of the top players in the country in the 2019 class. It is evident this year that she has matured and grown into an even greater leader for our team by stepping back and allowing others to shine, while she was the target of most opposing team’s game plan.”

Friedman has also received national acclaim, considering that she was selected to be a member of the U.S. National Indoor Women’s team that will compete for a national championship in late February and early March.

“It means a lot to get the award with her,” Borzymowski said about sharing the VSN honor with her friend.

By being so compatible with each other, the duo formed a formidable one-two punch this season.

“We just know each other so well, and I always knew where she would be (on the field),” Friedman said.

Both were vocal leaders who inspired their teammates to greater heights and together they were an imposing force that was not to be denied in 2018.

And she and the Mustangs did so in a big way by topping the Cougars, 3-0, in early November at Washington College.

For that, and for finishing the season with a sparkling 16-1 record while securing the No. 3 slot in VSN’s final Top 20 rankings, the former Towson University field hockey defender/midfielder is being honored as the 2018 VSN Field Hockey Coach of the Year.

After bringing home the state runner-up trophy in 2017 (pictured above), Kelly Mattingly led her Mustangs back to the 3A final in 2018 and defeated Chesapeake-AA, the team which had topped them the year before, for the 3A crown.

Mattingly’s low-key profile on the sideline belies the knowledge of the game she imparts to her players, who responded with another banner season in just the second year of her tenure in which she has built a formidable 33-3 overall mark.

C. Milton Wright captain Georgia Beachley, a senior midfielder and a Towson commit, said that Mattingly rarely loses her temper and does not yell at the Mustangs.

“She keeps her composure,” said Bleachley, who contributed seven goals and eight assists this season for the champs. “She knows that she can get through to us to do without (sideline histrionics).”

Bleachley added that from the first day of practice on Aug. 10 Mattingly emphasized the need to jump on opponents early, something they did to perfection in the state final by scoring twice in the first seven minutes.

“We wanted to catch them off balance,” Bleachley said. “They did that to us last year, and it’s just so hard to catch up — and we never did.”

The coach’s other message was how important it was for the veteran team to play up to its capabilities in order to take the title.

To that end, Bleachley said that Mattingly held “productive practices” in which “we improved every day.”

Opposing coaches, such as Notre Dame Prep’s Katrina Ross, have taken notice of how well Mattingly manages the game and prepares her players to excel.

“It’s always enjoyable playing teams who are led by strong, knowledgeable coaches,” Ross said admiringly. “Kelly is one of those young women — as you can see by how well prepared her team has been since taking over the C. Milton Wright program.

“I am looking forward to continuing our friendly but competitive coaching relationship in the future years,” Ross continued. “Retaining young, qualified female coaches in our sport is imperative to its continued growth and success in Maryland. Kelly and her superb leadership exemplifies who young women need to be mentored by.”

Ross, the 2017 VSN Field Hockey Coach of the Year, knows firsthand how well the Mustangs were mentored this season when the Harford County public school squad traveled to NDP’s Towson campus to take on the No. 1 Blazers in early October.

Although CMW eventually fell, 7-4, that day, Mattingly’s maneuvering of the offense had the now two-time reigning IAAM A Conference champs’ back on their heels for awhile in the second half.

“We definitely haven’t been challenged by an offense like that in a long time,” Ross said. “They were relentless.”

It was the most goals scored by an opponent against the Blazers during Ross’ three-year tenure at the school.

The game turned out to be a terrific learning experience for the Mustangs, who then went on to defeat Baltimore County champion Hereford, 5-2, before edging IAAM A Conference member Maryvale, 4-3.

“There were a lot of learning moments from that game playing against such a strong opponent like NDP,” Mattingly said. “That was the game that helped us get ready (for the rest of the season).”

After that it was back to the Upper Chesapeake Bay Athletic Conference for the Mustangs and then on to the playoffs, during which the defense did not allow a goal in a five-game winning streak to close the season.

“We had a lot of girls back from last year’s team,” Mattingly said about preparing for a return engagement in the state final against a familiar foe. “We told the girls to focus more on us and what we do. I told them just to go out and play their game.”

Paced by forwards Samantha Aljets and Arrianna May, the Mustangs set the tone early to earn the program’s second state crown and first since Janice Rhodes led the Mustangs to the 2013 championship.

“It felt really good, especially after last year,” Mattingly said. “We came out strong and ready to play.”