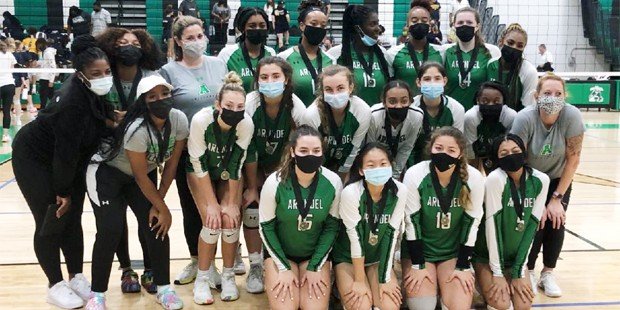 by Katherine Dunn
Arundel’s No. 1 volleyball team needed a big tournament from middle hitters Zaria Ragler and Kaiya Walker to counter strong blocking on the outside from No. 8 Annapolis Area Christian School in the championship match of Saturday’s Arundel Tournament.

The senior duo came through with a combined 52 kills to lead the Wildcats to a 23-25, 25-22, 15-4 victory to win the title.
Ragler and Walker each finished the tournament with a hitting efficiency above .800. They had just five hitting errors between them as Ragler had 32 kills and Walker, 20. They had five blocks each.
Senior setter Abby Niles dished out 48 assists and had 13 aces while junior setter Emily Liu had 36 assists and six aces while senior setter Ashley Barnes had 10 assists and three blocks.

The Eagles ran a quick offense that Arundel coach Ashley Yuscavage said was initially “startling” to the Wildcats, but they were able to adjust, taking control rather than reacting.
“Annapolis Area Christian was incredibly athletic. They were blocking well and they were really smart, like powerful but smart hitters,” Yuscavage said. “In the first set, we just came out and I think we were sort of waiting for something to happen and then in the second and third, we just talked about how we had to make things happen for ourselves and the second set was close, but in the third, once the girls started rolling, we were rolling.”
Both teams came into the tournament unbeaten. Annapolis Area Christian stands in first place in the IAAM B Conference. The Eagles hadn’t lost a set, including a three-set sweep of A Conference contender Archbishop Spalding.
The defending Class 4A state champion Wildcats have the best record in Anne Arundel County and earlier in the week, slipped past their top county rival, Broadneck, 14-25, 22-25, 26-24, 26-24, 15-10 in a rematch of the 2019 state championship match.
Although she would like to see the Wildcats get off to a quicker start, Yuscavage said, “I’m really happy with where we are.
“We had a hard time with Broadneck … and Saturday wasn’t a perfect day for us by any means,” she said, “but watching them struggle and do something about it is what we need. I’m excited with our ability to work through problems and not lose control. I’d like to see us come out a little cleaner and alleviate some stress, but I think these are good checkpoints for us at this point in the season.”

Bo Manor finished second in pool play, but stepped up to beat host Mercy in the championship of the Magic Invitational.

After Bohemia Manor won the Magic Invitational Saturday at Mercy, Eagles coach Sabrina Larmer decided not to take the championship plaque to dinner with her fiancé Matt Marion. After all, her team had just beaten his Mercy team to win the tournament.
“It’s fun because we’re both really competitive and we know that we have talented teams, so we’ve been talking about [playing each other] for a while,” Larmer said. “We were originally scheduled to do this last school year, but with everything, it didn’t happen. A year later it was nice to go against him.”
Marion, who joked that he was fine “after a few drinks” Saturday night, said he didn’t schedule the Eagles just because Larmer coaches them.
“I knew they were talented and from talking to her, I knew they would be a competitive team to add to the tournament, so it wasn’t just because of her,” he said. “I wanted teams that were going to compete and force us to play well and force everybody to play well and all four teams really did that. It was pretty competitive the whole day.”
In the four-team tournament, the Eagles and the Magic split their games in pool play, but the Eagles took the title match, 25-22, 25-14.
“Our girls served really well, they hit very smart and they played really good defense as far as hustling goes,” Larmer said. “We did not pass very well and while the balls were up, our digs were not necessarily in system, so I think we played really well out of system and just kept the ball alive.”
In the semifinals, the Eagles defeated Poly, 26-25, 25-15 and the Magic topped C. Milton Wright, 25-19, 25-20.
For the match, Eagles junior middle hitter Rylee Lentz had 24 kills, 12 blocks, 15 aces and 26 digs while senior setter Margaret McGlothlin dished out 50 assists and had 27 digs. Junior libero Julia Holmes had 38 digs and seven aces.
“We have a lot of talent on our team,” said Larmer, whose Eagles are the only Cecil County team to remain undefeated.
“Some of these girls have been playing together since they were 8th grade and freshmen,” she said. “I think our serving game is strong and our defense is good as well. I’ve probably got one of the best liberos in the county and in the UCBAC conference. She goes all out and keeps our team in games. When we’re struggling, she’s our go-to player.”
Mercy had the best record in pool play (5-1) dropping just one set to Bo Manor while the Eagles (4-2) also dropped a set to C. Milton Wright.
“I felt like we played really well,” Marion said. “We just couldn’t make the plays when we needed to. It was that simple. We’d get the momentum going and then kind of shoot ourselves in the foot. Obviously not to take anything away from Bo. They absolutely deserved to win, they played great and they made the plays, but it was just the worst time to not do what we’d been doing all day.”
Three players from each team were named to the All-Tournament Team: Lenz, Holmes, and McGlothlin, from Bo Manor; Meadow Hallmen, Sami Betley and Lauren Panageotou, from Mercy; Asia Murray, Madison Drummond and Arianna Durham from Poly; and Maddie Duffalo, Libby Gross and Jayda Patterson, from C. Milton Wright. 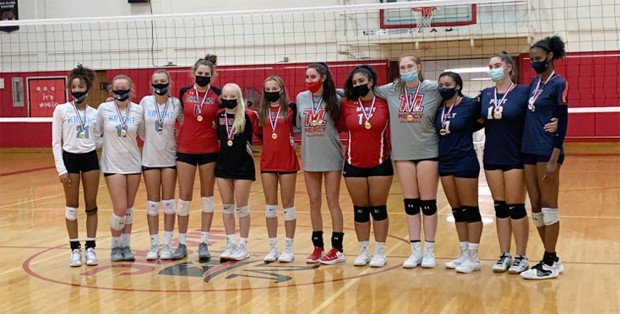