Vikings keep on keeping on

Mount Hebron eliminates No. 6 Marriotts Ridge in 3A state volleyball; No. 1 Westminster next up 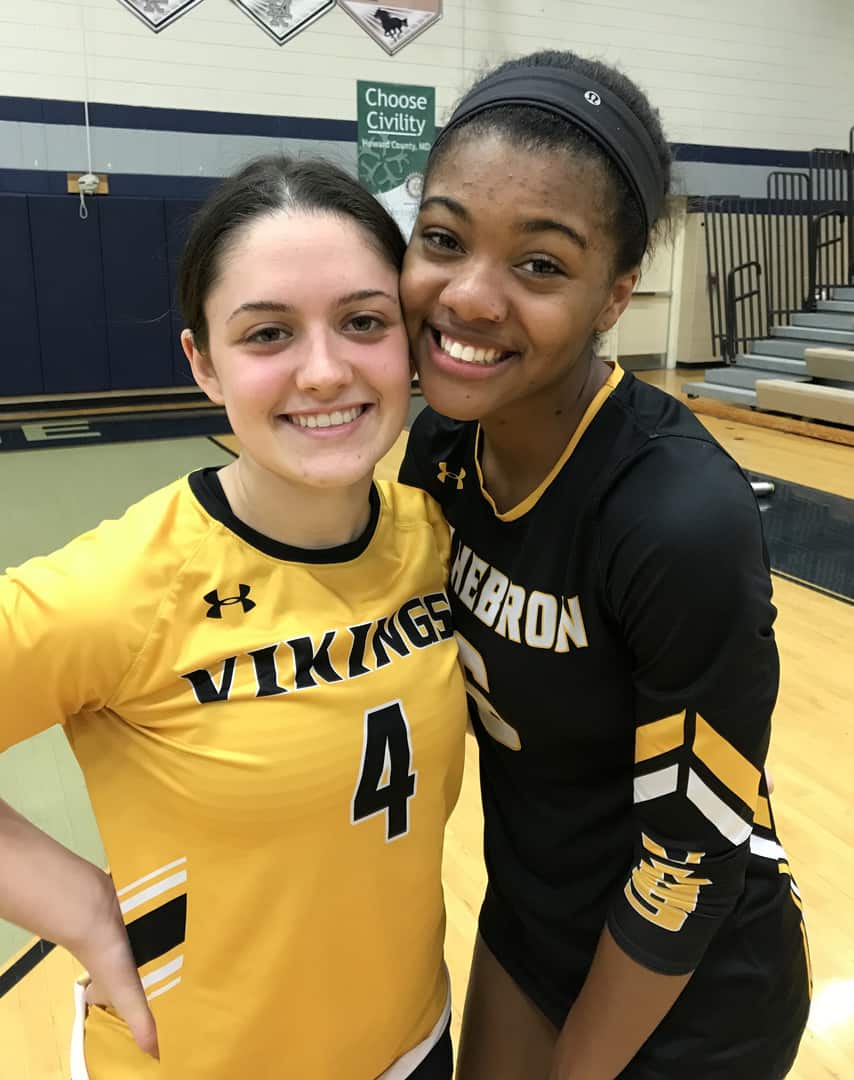 Mount Hebron senior libero Lara Szabo-Banicz (4) and junior outside hitter Morgan Amos played key roles in the No. 6 Vikings’ 3-1 win over No. 6 Marriotts Ridge in Monday night’s Class 3A East Region I volleyball semifinal. The Vikings next play at top-ranked Westminster for a spot in the 3A elite eight Wednesday.

When volleyball season started in September, Mount Hebron High was not in the conversation about who might win the Howard County title or go far in the regional playoffs.

The Vikings, with eight seniors, slowly grew into a championship team. They won the county title and Monday night, they defeated their biggest rival for a second time this fall in the Class 3A East Region I semifinal.

Sara Paradisi led the visiting Vikings with 15 kills and Morgan Amos had 12, but they don’t rely on one or two players and senior libero Lara Szabo-Banicz said that has been the key to their success all along.

“I think we even underestimated ourselves a little bit at the beginning just because we lost some really tall people last year, some key hitters, but I’ve seen growth in every single person on this team. Our motto is ‘Together we rise.’ It’s been all of us together, all 17 of us working together to reach a common goal,” Szabo-Banicz said.

The Vikings (13-2) jumped out to big leads in the first two sets and held off the Mustangs (13-2) when they rallied to within a few points.

In the third, Marriotts Ridge took the early lead and the Vikings rallied to pull ahead, 14-11, helped by a kill from Brenna Sipenko, an ace from Lauren Taylor and blocks from Amos, Sam Giles and Zainab Bharmal. The teams tied at 16, 18, 19 and 23 before a Mount Hebron service error and Julia Mamo’s cross court kill sealed the set.

“I think we started to get a little bit complacent,” Szabo-Banicz said, “and they started to pick up their defense and they started to be more aggressive at the net, so we just got caught off guard and had a hard time responding to that, but I was really happy at the end how we started gaining momentum and we took that into the fourth set.”

The Vikings scored the first five points of the fourth set and took a 12-5 lead. The Mustangs never got closer than within four points. In a key 5-1 stretch, Paradisi had back-to-back blocks that boosted the lead to 18-11 and sparked the Vikings to close out the set.

“They were obviously awesome,” Amos said. “I felt like that brought back so much confidence and energy for us that as a defense, we could rely on the front row and when that happened twice, it was so powerful. We brought up so much energy just from those two plays.”

Setter Sam Giles had 37 assists for the Vikings, who have won seven straight matches since their only county loss, to Atholton, on Oct. 7. They dealt Marriotts Ridge both of its losses, also winning the regular-season match in four sets.

“I think this kind of speaks to our whole season in that people didn’t expect us to really come out and perform and then we took people by surprise,” said Vikings coach Tina Catanach. “My girls fight… They really brought into the idea that we’re going to do this together. I just think my girls played with such poise and determination and the leadership of my seniors led to another great win tonight.”

For the Mustangs, Rheign Davis had 10 kills and Mamo had seven. Setter Brenna O’Reilly had 23 assists.

“I’m proud of them,” said Marriotts Ridge coach Jamie Bullock. “I only start two seniors and I start two freshmen. The team is basically juniors, so we’ll be strong next year too. We learn from it. We played much better than we played last time. They’re just a better team. They’re just consistent. When you’re not the team everybody’s looking at, you’ve got to be consistent.”

The Vikings, who won the last of their four state championships in 1995, need one more win to make it to the state quarterfinals. They know it won’t be easy to get past a talented Westminster team.

“I think they’ll be the best team we’ve played so far,” said Szabo-Banicz, “but all of us are so excited to have such a big challenge. We really love playing teams that are better than us and that really make us think about things and really make us put everything on the court and I think that’s going to be a really great game for that.”