Parkville salvage some pride for Baltimore County, surprises No. 8 Mervo in 4A North Region I boys basketball finale 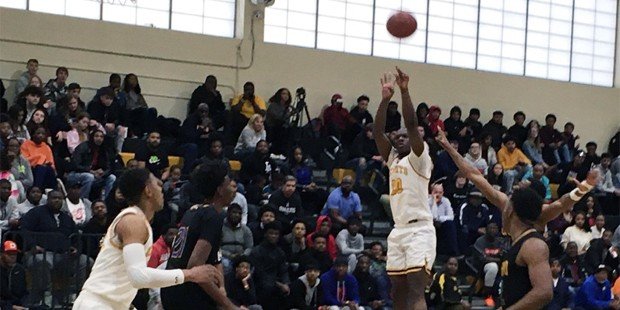 Parkville junior guard Darrius Tilghman takes a 3-pointer during Thursday’s Class 4A North Region I boys basketball contest against Mervo. Tilghman finished with 10 points as the Knights rallied for a thrilling 58-55 win over the No. 8 Mustangs in a front of packed gym on Putty Hill Avenue.

Except for a hearty band of Mervo High supporters, an overflow crowd of mainly Parkville fans roared their approval as the host and No. 20 Knights turned out the lights on the No. 8 Mustangs’ bid to reach the Class 4A state boys basketball quarterfinals with a taut 58-55 victory in the North Region I final Thursday evening in northeast Baltimore County.

Parkville (21-3 overall) will meet Montgomery County’s Springbrook in a state 4A Elite Eight match  Saturday and a chance to advance to its first state semifinal since 2008.

There were plenty of heroes on Thursday for the Knights, who fell behind, 12-4, to the Baltimore City school in the early going and did not take the lead for good until one minute, 38 seconds remained in regulation on a jumper from the elbow by senior Jordan Strickland. 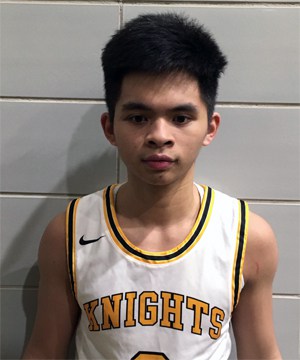 Parkville senior guard John Godinez made four clutch free throws in the final 18 seconds in the Class 4A Region I final Thursday night. He finished with a team-high 15 points in the triumph over Mervo.

A perfect 4-for-4 effort from the free throw line in the final 18 seconds by senior point guard John Godinez sealed the win to send Parkville forward.

“I’ve worked on free throws a lot my whole life,” said Godinez, who finished with a team-best 15 points and is averaging 18.5 points and four assists per game this season. “I just had to stay focused and locked in.”

A pivotal strategic maneuver by Parkville coach Josh Czerski, implementing a zone defense, made a big difference for the Knights after Mervo (16-6) jumped out to the big early lead.

By the time the first quarter was over, Parkville was only trailing, 20-19, after senior shooting guard Khalil Dukes drained a 3-pointer with five seconds left in the period.

Then the Knights took a brief lead early in the second quarter on Godinez 3-pointer before Mervo’s Will Thomas (game-high 20 points) knotted the score again on a pretty drive and teammate Demonee Carter hit from downtown to give the his team a 25-22 bulge.

The Mustangs never trailed again until Parkville junior Darrius Tilghman buried a 3-ball with just over two minutes left in the fourth quarter.

Thomas then put Mervo back on top by converting a pair of foul shots a couple of seconds later.

Shortly thereafter, Strickland stuck a go-ahead mid-range jumper to give the Knights a 54-53 lead.

Godinez extended the advantage with a pair of clutch free throws before Carter drew the Mustangs back to within a point after making two shots from the charity stripe.

With 10 seconds to go, Godinez swished a couple of more foul shots to restore a 3-point gulf that Mervo could not breach.

The Mustangs, after dominating 14th-ranked Dulaney, 78-44, in a regional semi earlier in the week, were unable to muster the same kind of offense they did against the Lions, mainly because of the zones Czerski employed.

“In the past week and a half, we worked on those 1-3-1 and 2-3 zones,” Czerski said. “It really worked. We knew that the city teams always think they’re going to blow out county teams. But going into the game, we had zero doubts. We fell behind, but we knew we’d battle back.”

Godinez and Strickland, who finished with 13 points, both said that there were plenty of people who were skeptical of the Knights’ ability to advance past the Mustangs.

“Even our whole school was against us,” Godinez said. “We just had to stay positive.”

“And we didn’t care that they all doubted us,” Strickland added. “This team is more than about basketball. We’re a family — a brotherhood.”