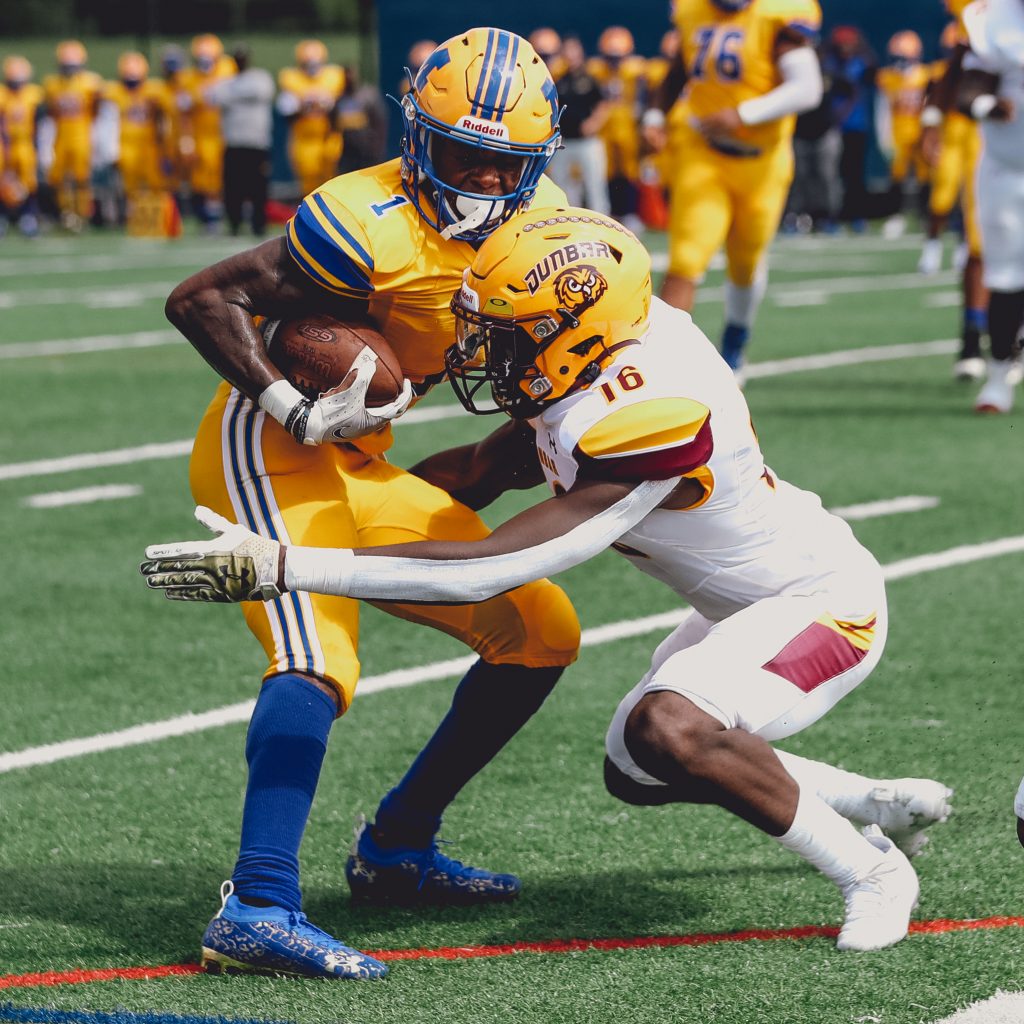 Mervo receiver Kylish Hicks (1) tries to avoid Dunbar defensive back Donald Smith after making a catch in the first half of Saturday’s Baltimore City football game. The No. 9 Poets scored 16 points in the final three minutes of regulation to force overtime, then stopped the No. 8 Mustangs’ 2-point conversion in the extra period for a 48-46 victory at Poly’s Lumsden-Scott Stadium. (photo – SportsMajors)

by Derek Toney
Dunbar High football coach Lawrence Smith does not rave about a player. A couple of days before the start of the 2021 season, the longtime Poet coach sent a text to a reporter.
“Remember the name Devin Roche,” Smith’s text read.
Saturday afternoon at Poly’s Lumsden-Scott Stadium, Roche put on a performance for the ages. No. 9 Dunbar outlasted eighth-ranked Mervo, 48-46, in overtime in a Baltimore City Division I contest.
In what will go down as the definitive game in one of the area’s most intense rivalries, the Poets overcame a 16-point late in regulation to force overtime. The Orleans Street school denied the Mustangs’ 2-point conversion in the extra period, virtually putting a deadbolt on the city championship.
“Poet Pride” found its way to Cold Spring Lane and Falls Road Saturday afternoon.
“Great job by my team today. They didn’t give up, they kept fighting,” said Smith. “Big win, but it’s only week three. It’s a long season.”
“Our brotherhood is too strong,” said Roche. “We’re too tight to give up.”
Dunbar (3-0 overall, 2-0 Division I) withstood a Mustang assault that put up 40 points in about two quarters. The Poets had to wait nearly an hour after the game was stopped for an injured player.
The East Baltimore school took a major step towards a perfect regular season Saturday, thanks to Roche. The 5-foot-8, 165-pound dynamo accounted for 260 yards and 36 of Dunbar’s 40 points in regulation, including two touchdown throws in the final 2:30.
“He’s the real deal. That was the real deal,” said Smith. “I know when one comes along and he’s one I knew he would be the man.”
Smith said Dunbar needed a “gadget play” to combat Mervo Saturday. Enter Roche (21 carries, 141 yards), who broke out a pile and sprinted to the end zone for a 69-yard score late in the first, then moved behind center in the “wildcat” formation before halftime.
“Honestly,” laughed Roche, “we winged it.”
Roche (5-of-8, 119 yards passing), who played quarterback in youth football and hadn’t taken any snaps in practice, threw for a 27-yard scoring pass to Tony Hart and a two-point conversion pass to Edward Cook, pulling the Poets to 25-24 at halftime.
Mervo (1-1, 1-1 Division I), once down 16-6 in the first half, opened the second half with Elijah Gorham returning the kickoff 78 yards for a touchdown. Late in the third, Gorham landed hard in the end zone trying to catch a pass.
The game was stopped as an ambulance was called and Gorham was transported to a local hospital.
Mervo coach Patrick Nixon said Sunday afternoon Gorham had a successful surgery for an injury Nixon declined to disclosed. He was unsure of Gorham’s recovery timetable.
The delay didn’t slow the defending city Division I champs Mustangs’ stride Saturday as Connor Hawkins, filling in for starter Derrick Dunn, threw a 20-yard touchdown pass to Vaughn Devaughn, extending the Mustangs’ advantage to 40-24. The Hillen Road school looked prime to put the game out of reach, but fumbled inside Dunbar’s 15 and Hill scooped up the ball and returned it to the Poets 45.
Four plays later, Roche, avoiding pressure, released a throw near the Poet sideline. Tristan Keenan grabbed it in the end zone for a 25-yard touchdown. Corey Anderson got the two-point conversion, bringing Dunbar to 40-32 with 2:28 left in regulation.
The Poets regained the ball just 25 seconds later, as Aaron Charles knocked the ball from a scrambling Hawkins and Melvin Brown recovered for Dunbar with 2:03 remaining. A penalty and sack put the Poets 2nd-and-long.
Roche again made magic happen. He eluded two Mustang defenders and moved to his right toward the Poet sidelines. He sent another heave downfield, and junior Devin Paige brought the ball in around the 3 and went into the end zone, making it 40-38 with 64 seconds left in regulation.
Roche dived into the end zone for the conversion, tying the game.
“I’m a running back, but hey, I made it happen for my team,” said Roche. “They needed me to step up and that’s what big-time players do.”
The Poets got the ball first in overtime, and two runs by Roche advanced the ball from the 10 to 8. Keenan scored from two yards, and got back into the end zone for the 2-point conversion. Mervo, aided by an offsides penalty on Dunbar, scored on its overtime possession with Bobby Johnson scoring on a one-yard run.

Thanks to Devin Roche, Dunbar is in position for the Baltimore City Division I league title. The junior accounted for 260 yards and five touchdowns, including two scoring throws late in regulation as the Poets defeated eighth-ranked Mervo, in overtime.

Dunn, who played at Dunbar in 2018 and missed all but the final series of regulation Saturday due to cramping, broke to his left on the 2-point conversion, then reversed field. He wasn’t able to elude the Poet pursuit as Brown and Tyler Hood brought Dunn down, and Dunbar celebrated an improbable victory.
“Every year we know Mervo is the game. We were ready to rock and roll,” said Smith. “It’s a big win for the guys, but it’s only week three.”
“It was a hard fought game. Both teams experienced ups and downs,” said Nixon. “We made a lot of mistakes and each one came back to bite us.”
Nixon said he expected Dunbar use Roche at quarterback to maximize its running back unit.
“What we weren’t prepared for the way he extended plays,” he said. “He was really effective with his arm.”
Not bad for a “running back.”
“Our goal is getting a ring for our seniors,” said Roche, with a boxing championship belt draped over his shoulder. “The main goal is Navy and we’re not done yet.”
No. 9 Dunbar 48, No. 8 Mervo 46 (OT)
at Poly
Mervo 0 25 15 0 6 – 46
Dunbar 16 8 0 16 8 – 48
First quarter
Dunbar – Safety (Mervo falls on ball in end zone)
Dunbar – Devin Roche 3 run (run failed)
Mervo – Derrick Dunn 2 run (pass failed)
Dunbar – Roche 69 run (Aaron Scott conversion pass from Roche)
Second quarter
Mervo – Kylish Hicks 24 pass from Dunn (run failed)
Mervo – Dunn run (ran failed)
Mervo – Hicks 20 pass from Dunn (Bobby Johnson kick)
Dunbar – Tony Hart 27 pass from Roche (Edward Cook pass from Roche)
Third quarter
Mervo – Elijah Gorham 78 kickoff return (Dunn run)
Mervo – Devaughn Vaughn 20 pass from Connor Hawkins (Johnson kick)
Fourth quarter
Dunbar – Keenan 25 pass from Roche (Corey Johnson run)
Dunbar – Devin Page 61 pass from Roche (Roche run)
Overtime
Dunbar – Keenan 2 run (Keenan run)
Mervo – Johnson run (conversion failed)