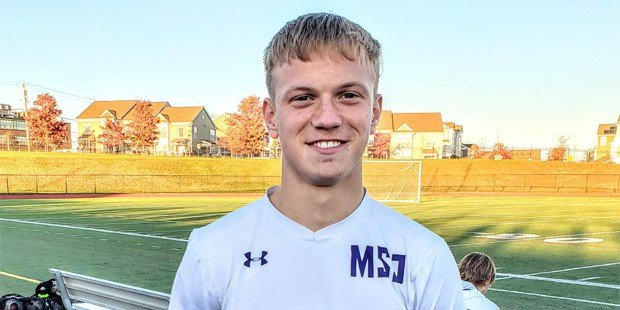 Van Danielson scores a hat-trick and adds an assist as the Gaels overpower the Friars, 7-0; Calvert Hall stays hot

Van Danielson lead the way for the Gaels (6-0) with an impressive hat-trick, and keepers Joel Fenstermacher and Dominic Jones combined to pitch their second consecutive shutout for Coach Mike St. Martin.

The Mount has outscored their opponents 25-6 this season, averaging 4.1 goals a game against quality opponents.

The Mount will host Calvert Hall on Wednesday afternoon and with a victory, the Gaels could take another major step towards clinching first-place in the Catholic League regular season. St. Martin was pleased that his team did not look past Curley on Monday.

“We’re never going to look past Curley,” said the veteran coach. “This was a big win for us. They just had a big win against Loyola the other day and we knew we were going to have to come out here and be ready to go. Van got us started with some great balls across the box, and some great finishes, and we played a great team game today.”

Danileson said that the Gaels are playing with a lot of confidence.

“For us, we know that with the coronavirus, any game could be our last game, so we really want to come out and put teams under pressure early, and we did that today,” said Danielson. “We have 26 guys on this team, and all 26 have quality.”

On his great offensive display, Danielson said, ”A hat trick is something you’ll never forget.”

“They are the class of the league, and they have some big time players,” said Griffin. “Mike always has them ready to play. For the first 20 minutes today, it was a very even game, but then they broke through and showed their class.”

Pictured above: Van Danielson scored a hat-trick and added an assist in Mount St. Joseph’s 7-0 win at Archbishop Curley.

CALVERT HALL STAYS HOT WITH A WIN OVER SPALDING

Calvert Hall continued its hot steak, winning for for the third straight time, Monday, with a 1-0 home win over Archbishop Spalding.

Hayden Lin lifted the Cardinals (4-1) with a score, off a set piece, in the 28th minute of the first half. Calvert Hall controlled possession throughout the contest, creating numerous scoring opportunities in the second half, but the Cardinals were unable to add to their lead.

On Wednesday, the Cardinals will visit first-place Mount St. Joseph, in Irvington.Earlier this year, the undefeated Gaels edged the Cards, 3-2.