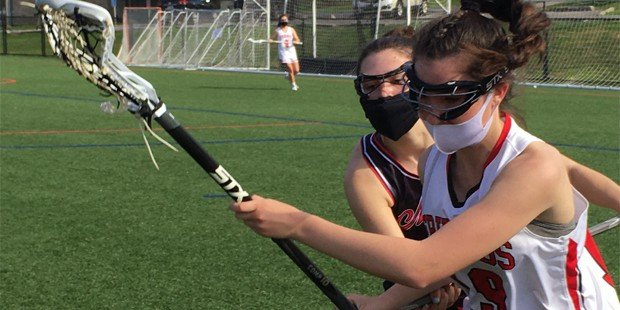 Burnett, Collender and Laine combine for 11 goals to keep Magic perfect in IAAM B Conference

As a heavy favorite to claim its fourth consecutive IAAM B Conference lacrosse title, Mercy is in some ways in a tricky position this season.

With such lofty expectations, some people believe that the Magic should simply roll over their conference foes, although Mercy coach Brian Casserly and his crew know that it’s not that easy to maintain a 24/7 championship focus. 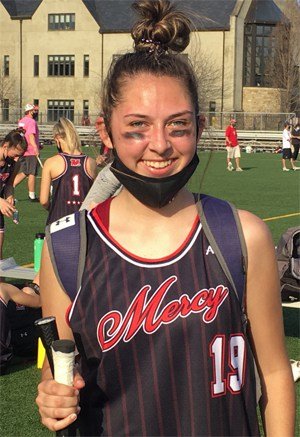 On Wednesday afternoon at Friends, Mercy found the Quakers to be less than pliant — that is, until the floodgates opened in the final 15 minutes as the Magic raced to a 17-5 victory.

At that point, Mercy only held a modest 9-5 advantage before closing the game on a withering 8-0 run to win going away.

The score was only tied once, and that was with 17 minutes remaining in the first half on a goal by Friends senior Katherine Bauer, who matched Mercy freshman attacker Jamie Collender’s opening tally.

However, the Magic then rattled off six straight goals to build a 7-1 lead early in the second half on two goals by senior attackers Mickey Burnett and Madison Laine and one each by sophomore attacker Sydney Casserly and freshman midfielder Juliana Mills.

Friends responded with a three-goal burst, fueled by juniors Mani Carnes and Paige Saudek and sophomore Carlie Koch to make it 7-4 with 17 minutes left in regulation.

Mills and Casserly found the range again for Mercy before Carnes buried a turnaround shot to keep the Quakers within shouting distance, at 9-5, two minutes later.

That’s when the Magic found another gear — call it overdrive — to overwhelm the Quakers.

Burnett converted a feed from Collender and then buried a free position shot to get it started, with goals by junior midfielder Savannah Safchuck, Burnett again, Laine, Bella Wojcik and two more by Collender to close the deal.

“Our transition just wasn’t there in the first half,” said Burnett, a Lander University signee. “But then we made small adjustments and started to play together as a team — and got out of the mind-set of playing as individuals.”

First-year Friends coach Megan Milliman, who has served as both a head coach and an assistant in several college programs, said that the Quakers have a lot of unfamiliar concepts to grasp this spring.

“For them to implement the new system has been difficult, but they’ve been very adaptable,” she said, noting that a zone defense has been installed to help keep the defense tight in front of senior goalie Isabelle Paff.

In the late going, fatigue seemed to take its toll on the Quakers while the deeper Magic appeared to be even more energetic down the stretch.

Brian Casserly, who picked up his 50th win as the Magic coach, said that Friends did “a pretty good job in the draw circle in the first half.”

He went on to say that it’s hardly a secret that the best way to stop a high-powered offense is to limit its possessions, something Friends was able to do in the opening period.

Moreover, Paff made five of her seven saves during that span.

“Friends is well coached by Meg, and they were super-prepared,” Casserly said. “And their goalie is a really nice player.”

Casserly went on to say that his team adjusted better to the zone late in the game by favoring quick ball movement over dodging.

It worked to perfection in the late going, as the Magic stay unbeaten overall at 5-0 and 4-0 in league play while Friends dropped to 1-2 in the B Conference.

Mercy is slated to meet Annapolis Area Christian School on Friday, the same team the Quakers are hoping to knock off in their next game on Monday, April 12.

Pictured above: Friends freshman Samantha Wilkins tries to keep possession of the ball despite the tight defensive pressure applied by Mercy sophomore Talia Maria in the Magic’s 17-5 triumph Wednesday afternoon.