Hereford High attacker Maddy Izzo had not scored a goal during regulation of Monday night’s Baltimore County girls lacrosse championship, but the junior didn’t miss her chance to polish off a monumental comeback.

Izzo flashed through the middle, took a perfect pass from Kennedy Ziegler and buried in it the net with 2 minutes, 12 seconds left in the second overtime, giving the No. 16 Bulls a 13-12 victory over 20th-ranked Towson at Catonsville.

Izzo’s goal was the 10 straight for the Parkton school, who trailed 11-1 late in the first half.

“We had this play set up where we would iso behind,” said Izzo, “and I saw [[Ziegler’s] eyes looking at me. I cut and I wasn’t open, so I cut back and she got me the ball and I finished. It was a rough start, but we had a great comeback … one of the most exciting moments of my life.”

The Bulls (12-1 overall) won their fourth straight county title, but for the seniors on this team, it was only their second. Because COVID-19, there were no county championships the past two years.

“This is so special,” said senior Jordan Peterson, who led Hereford with four goals. “This is so important. Towson’s a great team. We knew it was going to be a battle and being down made this even more special. This team is so great and I’m just really happy for everybody.”

In the regular season meeting, the Bulls had to fight off a late Towson rally to win 9-7, but the Generals (10-3) dominated possession in the first half Monday night. They won nine of 13 draws and were much more careful with the ball this time.

They scored the first five goals and ran their lead to 11-1 when Chloe Gibson fed Brigid Vaikness for an extra-man goal with 1:29 left in the half. Hereford missed their first six shots and, at one point, Towson scored four straight goals without Hereford ever touching the ball.

“We put ourselves in this position,” Bulls coach Kelly Swift said of the halftime deficit, “and I just said to the girls, ‘You’re not going to give up. We’re going to chip away at that score,’ and that’s exactly what we did. We really struggled with the draws in the first half, we really struggled with the 50-50 balls and Towson was doing great. Their attack was moving very well and breaking down our defense. Then we let the captains talk and … they came out in the second half and did what they should have been doing in the first half.”

The comeback, however, started about a second before the end of the first half. After Hereford goalie MK McGonigle made a save, the Bulls set up for the final shot of the half. Peterson’s goal on a pass from Avery Briggs hit the net just before the buzzer — a goal that looked far more critical at the end of the game.

“We didn’t really have time to set anything up,” said Peterson, “so we just knew we had to score. I knew that time was low and … I felt earlier in the half I was rushing my shot, but this time, I felt more calm and relaxed and it perfectly worked out. That was kind of like the momentum shift even if we didn’t know it then.”

Ziegler scored to open the second half but Kara Janishefski quickly answered for a Towson 12-3 lead with 16:52 left in regulation. The Generals would take just two shots in the final 20:38 of the game. 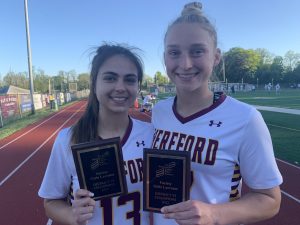 Maddy Izzo (left) and Jordan Peterson played vital roles in Hereford’s epic comeback Monday. Peterson finished with four goals and Izzo had the “golden tally” in the second overtime as the 16th-ranked Bulls, down 11-1 late in the opening half, won 13-12 over No. 20 Towson, for their fourth straight Baltimore County championship.

Izzo credited the Bulls’ captains — Peterson, Hope Barber, Maddie Magliocca and Lindsey Moneymaker — with sparking the comeback with their positive motivation at halftime.

Peterson scored three goals in the run. Moneymaker and Cam Kauffman scored twice each while Katie Burks and Izzo added single goals. Peterson scored the final two goals of regulation, tying the game on a free-position goal with 4:13 to go.

Peterson won the next draw, but the Bulls turned it over and both defenses denied a potential-game winning shot to force extra time.

Towson’s Mary Clair Huebeck won the first draw in overtime, but the General turned the ball over. In the second three-minute period of overtime, Peterson won the draw and then Ziegler set up the play from behind the goal, feeding Izzo 46 seconds into the period.

The Generals could never turn the momentum as Hereford won seven of the last 10 draws. They only managed four shots in the half. One hit the net, one hit the pipe and McGonigle saved two.

“I just think second half we came out overly confident,” said Towson coach Taylor Carhart. “We knew what we wanted to do, came out and executed our game plan first half. That’s what we needed to do second half. I knew [the Bulls] were going to apply more pressure and I told them that and I think my girls just got a little frazzled by the pressure and just were scared. They beat themselves that half. Hereford didn’t beat them; they beat themselves,

“Hereford’s a very skilled team and good competition. It’s always fun to play them and I look forward to playing them for years to come. Congratulations to them. They deserve it. They played an excellent second half and overall outplayed us second half.”

Both teams now move on to the state regional playoffs and will host their first games within the next week.

The Bulls are the No. 1 seed in the Class 2A North Region I and have byes through to Monday’s regional final against the winner of Friday’s game between Lansdowne and Milford Mill.

The Generals are the top seed in the Class 3A North Region II and have a bye into Friday’s semifinal where they will face the winner of Wednesday’s opening round match between Edgewood and Franklin.