For a few fleeting moments, Perryville High was primed for a massive upset Saturday in the Class 1A state volleyball final. Up 24-20 in the tie-breaking third set, the 14th-ranked Panthers had Smithsburg’s reign in jeopardy.

But, in about three minutes, it all changed. Smithsburg rallied to win the set, and then finished off Perryville in the fourth set at the University of Maryland’s Ritchie Coliseum for its seventh title in eight seasons.

Rising Sun’s repeat bid in 2A was denied, but not without a valiant fight. The No. 7 Tigers rallied from 0-2 deficit to force a fifth and decisive set where Williamsport from Frederick County emerged with a 15-11 victory for the crown.

“If you’re going to play a state championship match that is what you want to see,” said Tigers coach Rich Wilson. “I have to say I’m proud of my kids. Down 2-0 and never gave up.”

The Tigers (23-1) ran into a team that they couldn’t seem to overpower as the Wildcats did an excellent job digging to negate the power that Rising Sun shows around the net. Senior hitter Lacey Swartout was the main culprit in leading the comeback. Flashing impressive power at the net and a consistent serve, Swartout finally found some positive momentum for the Tigers.

Rising Sun was unable to get control in the deciding set. Keara Lewis’ 20 kills and Britney Malphurs 21 assists led Williamsport.

“We’re are all really close and we did a great job. We all played our hearts out because we did not want to lose in three sets,” Swartout said. “It was way better to go out in five than it is three because we tried and we were together.”

It’s the first state title since 2012 for Williamsport. Despite blowing a two-set advantage, the Wildcats were able to regroup.

“What we’ve been saying all season long is resiliency our girls have fought all season to recover when we get down,” said Williamsport’s first-year coach Karen Moyer. “To stay mentally tough to bring the team together one point at a time. We were resilient [today].”

On the brink of taking a 2-1 set advantage, Perryville didn’t get the clinching point as Smithsburg won the final six points.

“Very disappointing end to that game. I think we played as well as we’ve played in years. I think it was a really tight contest,” said Perryville coach Matt Borrelli. “I think at the end of that third set, when we just let them score I think what was like six points in a row. I think that was the momentum shift they needed and then they finished out the fourth set.

I think if we had finished out that third set, I think we would have won in four, but unfortunately it didn’t go our way.”

The Panthers were boosted after dropping the first set, winning the second in easy fashion. Then, disaster struck.

After being on the brink in the third set, the Panthers appeared a bit lifeless in the fourth and Smithsburg captured its third straight state championship.

Sydney Scott (23 kills) and Lauryn Daniels (16 kills) combined for 39 of the Leopard’s kills and Katie McCracken helped them out by racking up 39 assists.

“I’m just extremely proud of them like I always am. Perryville is a good team. They came out swinging and they have two very strong middles that put a lot of balls down on us tonight,” said Smithsburg coach Rachel Brashear. “We fended off game point I think like four or five times in that third set and I think that really shows what these girls are made of … To be sitting here 19-1, that’s pretty sweet.”

One of those middles was Perryville’s imposing Gabby Goodnow. A tall powerful presence at the net, Goodnow slammed down 17 kills on the night and at times looked unstoppable.

That forced Brashear to change her strategy a bit and try to keep the ball away from her and not letting her get set right under it. The coach believes that adjustment was key in the fourth and final set.

Several of the Perryville players noted this is the first time they can remember getting a set off of Smithsburg. It was the first time since 2001 the Leopards dropped a set in a state final match.

“I think they did the same thing they did last year which was wherever the block was, they hit around the block. They used our weaknesses and hit it places we weren’t,” said Goodnow.

“Volleyball is a game of momentum and we had it going into that second set. It carried on and we played really hard and used that momentum to our advantage,” said Rising Sun senior hitter Teri Wennersten. 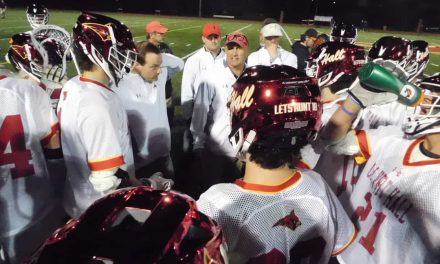 One Hall of a performance

Broadneck battles from behind to win Bogle Red Division title 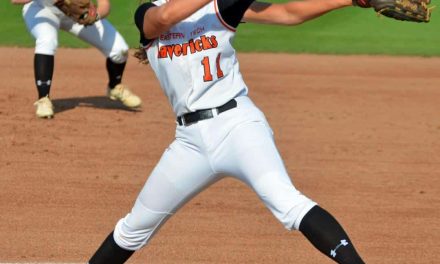