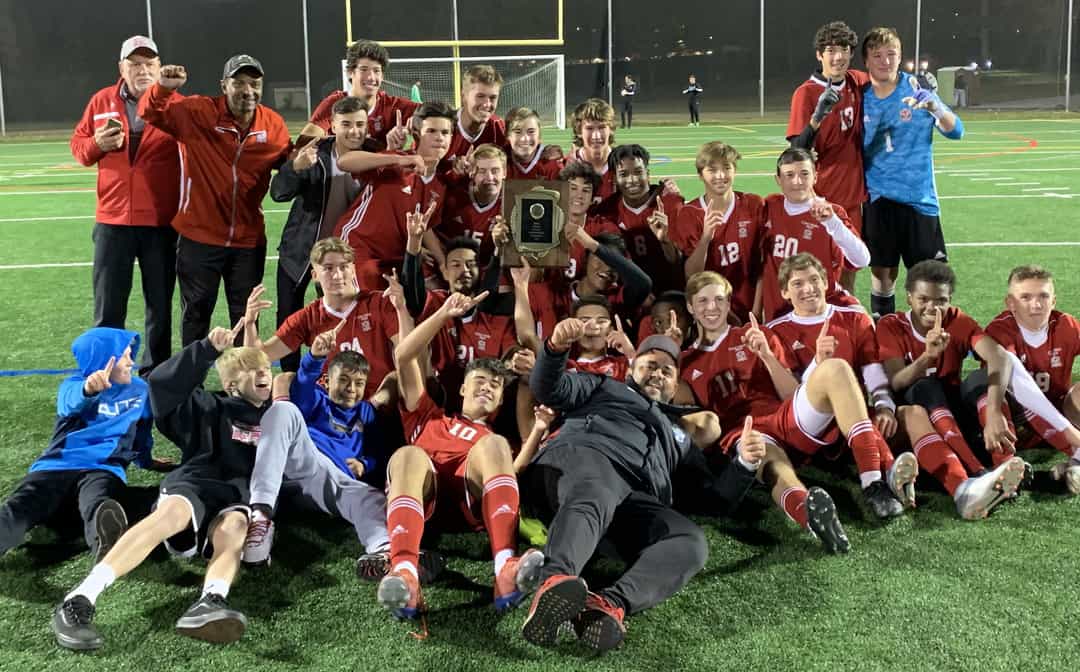 Missing a potential game-winning goal in a soccer championship game would rattle most people. Not Taylor Calheria.

The Concordia Prep senior shook off the miss, assisting on the game-winning goal in a 2-1 overtime victory over Friends School in the MIAA B Conference title game at CCBC-Essex Sunday.

It was Paul Levenson who drilled the “golden goal” for the Saints with 4 minutes, 20 seconds left in overtime after getting a cross from Calheria.

“It all happen so quickly, the ball bounced, I kicked it in and the rest is history,” Levenson said.

“Once I was on the line and I saw Paul [Levenson], I just crossed the ball and knew he could finish it and he came up big,” Calheria said.

Concordia had an opportunity to win in regulation when Calheria was awarded a penalty kick with 22 seconds remaining. The UMBC recruit’s caromed off the crossbar.

“This is definitely a great feeling, to have the ball on the penalty kick, miss and go into overtime,” Concordia coach Adauto Neto said. “But we believed that we could get the final goal, to get the ball to the middle and play the post, it was just great football.”

It was the third straight year Concordia and Friends played for the league title. Friends won the title in 2017, and the Saints won last year.

In claiming a back-to-back, the Towson school avenged two regular season losses to the Quakers. After a scoreless first half, Concordia broke the stalemate in the second half.

Taylor Calheria, the coach’s son, was able to split two Quaker defenders and bury the ball into the right corner of the net,

“When my brother Ryan flicked me the ball I knew I could beat my man, so I just ran as fast I could and I was able to finish,” Calheria said.

Friends sophomore goalie Samuel Whitman rose to the occasion after the Calheria goal, getting four of his six saves in the second half to keep the game tied. With 18 minutes left in the second half, Concordia committed a pushing foul in the box and a penalty kick was awarded to Friends (15-6), and Edward Forbush booted the ball into the left corner, tying the game.

Concordia had chance to end it with Taylor Calheira after he was pushed by Whitman on a rebound attempt five yards away from goal. He missed the penalty shot.

“It’s a part of the game, big time players miss PKs, but that should not affect our game, you keep fighting, keep believing and I knew we would find the goal and I so am happy for the guys,” Neto said.

Calheira’s miss was a second chance for Friends, which would be left heartbroken after Levenson ended its title bid.

“We had a strong senior group and I knew that we had a chance against whomever we saw in the final,” Friends coach Phil Greatwich said. “We worked hard all season and it came right down to the wire. It’s a horrible way to go out, but we had some fun along the way, this is a family oriented group and I have no regrets about how it went.”