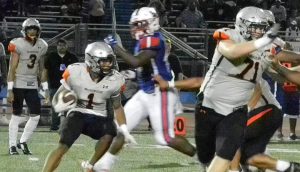 McDonogh’s B.J. Farrare (1) looks for running room during the second half of Friday’s football contest with DeMatha Catholic. The area’s No. 3 ranked Eagles held their own against the nationally-ranked Stags, but fell short, 17-14, at the Prince George’s Sports Complex in Landover.

Last season, DeMatha Catholic High football team dominated McDonogh School in the second half en route to victory. It was a different story in the rematch Friday evening.

The third-ranked Eagles gave the nationally-ranked Stags all they could handle – and then some. But the end result was familiar for McDonogh as DeMatha scraped out a 17-14 decision at Marvin Wilson Stadium at the Prince George’s Sports Complex in Landover.

“I think we were good enough to win…we were a couple of plays away,” said Eagles coach Dom Damico. “We just couldn’t make those plays and get it over the top.”

Joseph Hood’s 22-yard field goal with 5 minutes, 54 seconds left in regulation was the decisive play for the Stags (3-1 overall), ranked No. 1 in the state media poll and 15th nationally by USA Today. It was the Hyattsville school’s 20th victory in its last 21 decisions since 2015.

Mustipher’s senior mate B.J. Farrare said it was a statement game for the Eagle seniors.

“Last year, our leadership was there, but it wasn’t where it needed to be at crucial times,” said Farrare, a four-year starting wide receiver/defensive back. “Today was a big game for the seniors to lead because we have a lot of underclassmen and they look up to us.”

The Eagles (3-1) trailed 7-0 after Ty Lenhart found junior wideout DeMarcco Hellams in the corner of the end zone for DeMatha. McDonogh would answer behind the legs and arm of quarterback DeJuan Ellis.

The Virginia Tech University commit scored on a two-yard scamper to the corner of the end zone, helping the Eagles tie. Late in the first half, Ellis lofted a 40-yard pass to Farrare, and the elusive senior signal caller got into the end zone for an 12-yard touchdown run.

The Eagles’ offense was muted in the second half, producing just 20 yards and one first down. Ellis was intercepted in the end zone early in the third quarter after the Eagles recovered a DeMatha fumble.

After Hood regained the lead for the Stags, McDonogh gained its only first down of the second half on a 12-yard run by Ellis. The Eagles got to midfield, but punted after Ellis was sack on 3rd down.

The Eagles’ defense kept DeMatha to just three plays, and McDonogh was in position to get the ball back, but a roughing the punter penalty retained possession for the Stags. DeMatha ran out the final 2:13 of regulation.

Damico said the Stags’ depth was the difference.

“We got a lot of two-way players and it’s the hardest thing to do against really strong, physical guys,” said Damico. “It catches up with you and you got to make the little plays to get enough separation so they can’t wear you down.”

In the postgame huddle, Damico told his squad they gave “98-percent effort.” That’s good enough against most teams, but not against elite national programs like DeMatha.

Despite the loss, Damico is excited about McDonogh’s prospects moving toward MIAA A Conference play. 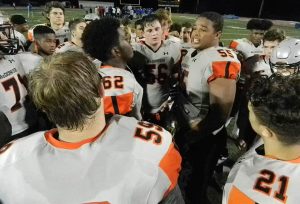 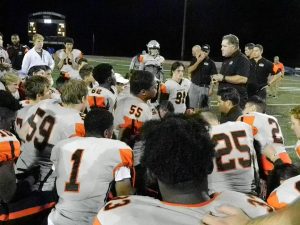 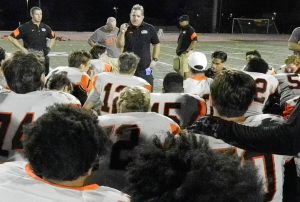 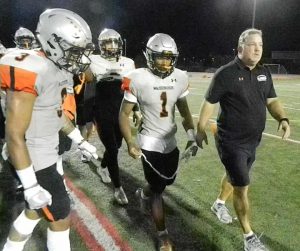 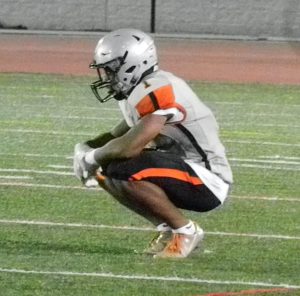 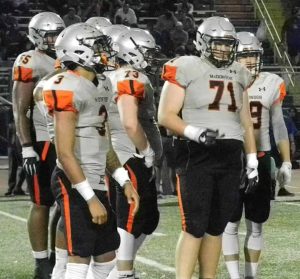