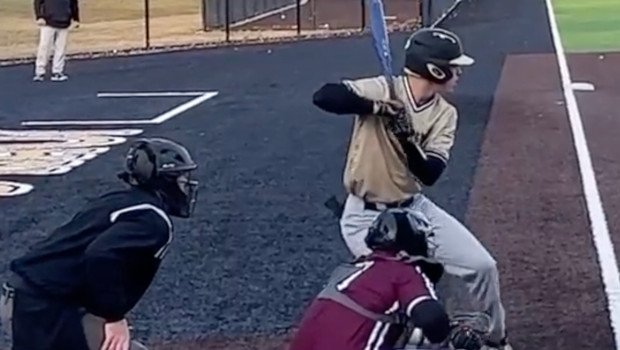 After scoring 19 runs in a scrimmage against Bethesda-Chevy Chase on Saturday, the John Carroll baseball waited until the third inning of their season opener to get the offense going, Tuesday at home against Boys’ Latin. Once the Patriots got rolling, however, they piled up the runs quickly and defeated the Lakers, 10-0, in just five innings.

The offense was much more than enough as William Weiman pitched four near-perfect innings for JC and Chris Lanzilotta tossed a hitless fifth inning to give the two Patriots a combined no-hitter.

Weiman walked the second batter of the game, Boys’ Latin’s Kaden Lymon, on four pitches, and committed an error that allowed another Laker to reach in the fourth, but that was it. Along the way he struck out six. In the BL fifth, Lanzilotta allowed a leadoff walk, which was followed by an error that put Lakers on the corners. He then retired the next three to preserve the shutout and no-hitter.

Boys’ Latin starter Matthew Richmond struck over the first two innings, but John Carroll went to work in the third.

Austen Mezan led off the inning with a double and Frank Adamski plated him with an RBI single. Later, Ethan Ruiz drove in two runs with a bases-leaded double which drove Richmond from the game. Matt Bishop made it 4-0 with a sac fly, William Rhine added an RBI single, the sixth run scored on an error and Mezan knocked in the seventh run with his second hit of the inning, an RBI single.

John Carroll reach the 10-run threshold with three more runs in the home half of the fourth.

Adamski doubled to center to start the rally and scored on a Ruiz single. Rhine plated the ninth run with a fielder’s choice grounder Cassey Carpenter drove home the final run with the Patriots’ fourth double of the day.

Pictured above: John Carroll’s Frank Adamski, who had 2 hits, including a double, 2 runs scored and an RBI in the Patriots’ 10-0 season-opening win over Boys’ Latin, awaits a pitch to hit.