No. 17 Liberty fends off Glenelg for 2A state football Elite Eight berth; Kent accounts for 347 yards and 4 TDs 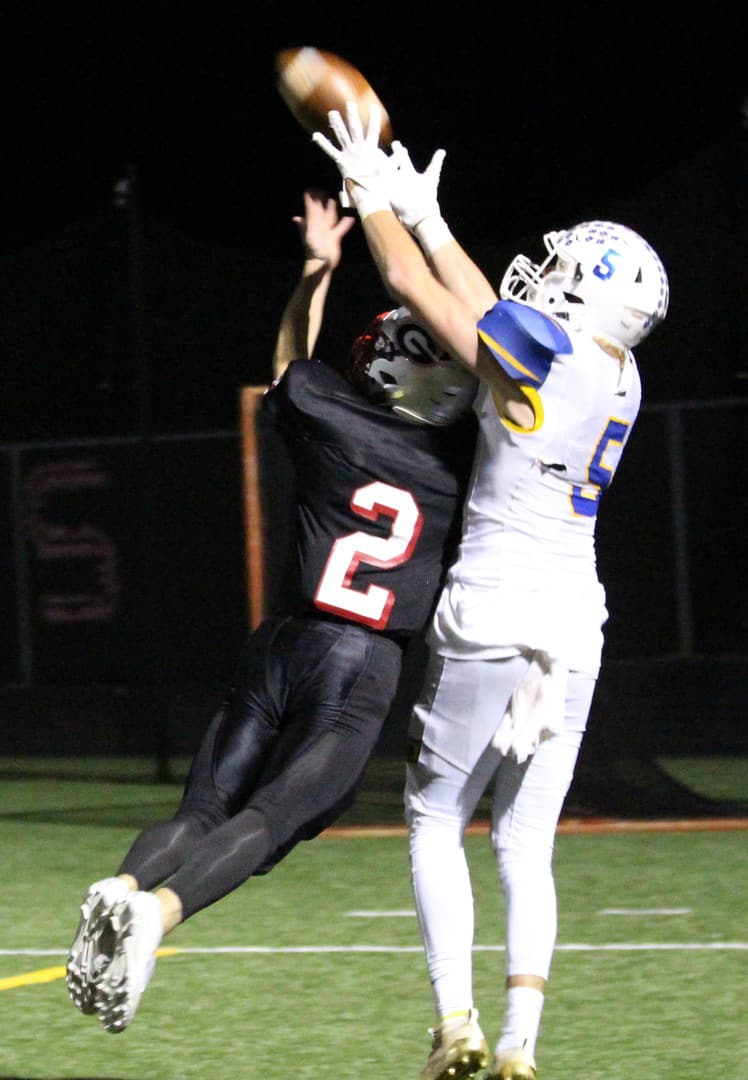 Liberty’s Peyton Scheufele (5) nearly comes up with the catch against Glenelg’s Trisden Bovello during the first half of Friday evening’s Class 2A West Region second round match. Scheufele ended up with two touchdown catches as the No. 17 Liberty advanced to the 2A Elite Eight with a 35-28 victory over the 19th-ranked Gladiators in Howard County. (photo – Jean Bouvello)

Nate Kent has a pretty good idea about Liberty High football. Since he was 4 years old, he’s been around the program.

Kent’s 31-yard touchdown pass to Tommy Nelson early in the fourth quarter proved to be the difference for the Carroll County school (8-3 overall), which gained back-to-back postseason victories for the first time. The Eldersburg school will play at North Caroline or No. 12 Elkton in a 2A state quarterfinal next Friday evening.

After routing Oakland Mills last weekend for their first postseason win since 2014, the Lions outlasted Glenelg (7-4), which reached the 2A state final last season.

“We made history tonight, I guess you could say. We got past the first round, got past the second round,” said Kent. “This is a great group of guys and wouldn’t want to do this with anyone else.”

Kent was 4 years old when his father Jeff became Liberty coach in 2006. Jeff Kent coached the Lions for seven seasons, guiding them to their first postseason in 2007.

Nate Kent became a Lion football player last season after transferring from Westminster. He was one of the area’s top dual threat quarterbacks with 1,511 yards and 22 touchdown passes and team-high 646 yards rushing as Liberty posted its first undefeated regular season.

Kent brought home Liberty’s landmark triumph, completing 13-of-19 attempts for 267 yards and three scores and ran for 80 with a score. He accounted for 30 yards in a critical 11-play, 43-yard fourth quarter series that milked six minutes off the clock.

“Nate Kent is one of the best quarterbacks in the area. He hasn’t gotten an offer yet and somebody should be recruiting him,” said Lions coach Larry Luthe. “He’s composed, he’s competitive. The throw he made to Peyton (Schefule) on the waggle route to the corner was as good of a throw you’ll see.”

Kent connected with Schefule (five catches for 97 yards) on scoring throws of 47 and 20 yards. On 4th-and-7, he dropped the ball into the hands of a streaking Nelson down the sidelines for the lead with 11 minutes, 47 seconds left in regulation and hit senior Michael Spitz on a quick jump pass for the two-point conversion.

“I like having the ball in the big time moments,” said Kent, who commended Nelson (170 total yards) and the offensive line of Antonio Delgado, Jacob Liska, Garrett Geidel, Michael McCracken, McClain Butler and Kyle Hutchinson.

Kent’s heroics narrowly overcame a brilliant performance from Glenelg running back Kyle Dry, who rushed 183 yards and two touchdowns and caught a 25-yard option pass, setting up a Glenelg touchdown right before halftime. After Liberty scored on its first two possessions of the second half, Dry answered with a 65-yard run down the sidelines, putting the Gladiators up, 28-27, with 4:18 left in the third quarter.

It was Kent’s turn, running 10 yards for a first down following a pass interference call on Glenelg on 3rd-and-16. The Lions would regain the lead as Kent connected with Nelson on the second play of the final quarter.

Outside of Dry’s touchdown run, Liberty’s defense kept the Gladiators’ offense under control in the second half. Spitz’s interception with 2:14 left in regulation put the Lions in position to close out the victory.

“We finally got the mojo from the first half. We came out with the energy that was really dominant,” said Spitz. “When we do play with that energy and chemistry, we’re a tough team. We had a lot more success stopping the run. Number one (Dry) is a very talented player and 10 (Drew Stoka) is a good tight end.”

“It was a great high school football game,” said Luthe. “We just made one more play than they did.”

Dry’s 6-yard touchdown run and Stoka’s two scoring catches from Mason Davis staked the Gladiators to a 21-13 halftime advantage. The Western Howard County school attempted an on-sides kick to start the second half and Liberty fell on the ball at midfield. The Lions went on to score as Kent got to the corner of the end zone for a tw0-yard touchdown on 4th-and-goal.

Glenelg coach Tim Cullen said the plan Friday was “to steal possessions” to keep Liberty’s offense on the sidelines.

“I thought we needed a two-score lead. We were fortunate enough to have one score at half so, to me, it was a no-brainer to on-sides kick,”  said Tim Cullen.  “We hadn’t done a good job stopping them.”

It was the fourth loss by a touchdown or less for the Gladiators, who reached the 2A state final last season. Cullen, a longtime assistant, moved into the lead coach role after Butch Schaefer ended his decade-plus run after last season’s historic campaign.

“The kids brought into what we were doing. The senior leadership really took over,” said Cullen. “It made for competitive practices. We took pride in everything we did, from keeping the locker room clean to doing well in the classroom.”

After Friday’s victory, Liberty players took pictures, commemorating the historic win. After starting 0-2, the Lions are now two victories away from their first state final. 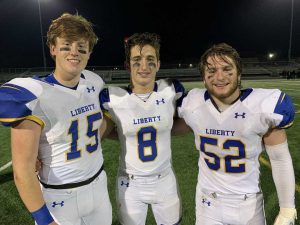 Nate Kent (left), Michael Spitz and McClain Butler helped Liberty pick up its second straight playoff win for the first time in school history. The Carroll County school will play at either North Caroline or Elkton in a state quarterfinal next Friday evening.

“Every team wants to leave their legacy. We didn’t win the county so what will be our legacy, how many playoff games we can win,” said Luthe. “We got two, hey, we’re going to try to get three.”

CLASS 2A WEST REGION SECOND ROUND 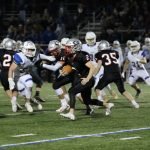 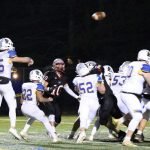 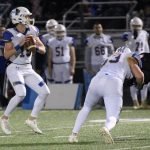 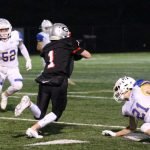 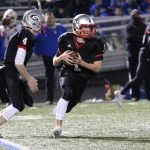 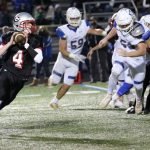 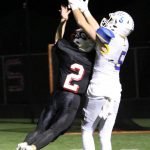 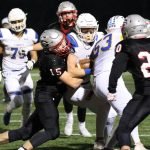