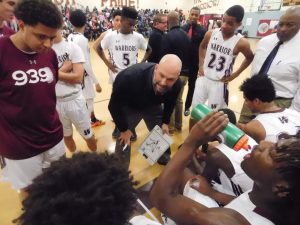 Havre de Grace boys basketball coach Brian Eberhardt talks to his team during a timeout. The Warriors’ bid for a perfect season and state Class 1A championship ended with a 72-66 loss to Somerset County’s Crisfield in the East Region final Friday evening in Harford County.

Leading with three minutes left with the deafening roar of the home crowd behind them, Havre de Grace High boys basketball was poised to continue its fairy tale season Friday evening.

But, the proverbial clock stuck midnight on the Warriors. Crisfield rallied for a 72-66 victory over 20th-ranked and previously undefeated Havre de Grace in the Class 1A East Region final in Harford County.

The Crabbers (24-2 overall) from Somerset County held the Warriors (23-1) scoreless over the final two minutes of regulation, to capture their first state Final Four spot since 2014. Crisfield will play the winner of Saturday’s West Region final between Southern-Garrett and New Era Academy, Friday at the University of Maryland’s Xfinity Center.

The Warriors were poised to punch their ticket to the final weekend of the season for the first time since 2003, leading 64-60, but Crisfield quickly scored five straight points to take the lead. Gary Gibson’s layup put Havre de Grace up, 66-65.

Crisfield converted 5-of-6 at the foul line over the last 90 seconds. Marlon Lewis, who led Havre de Grace, with 26 points, missed two free throws in the double bonus and the Warriors lost the ball on their next possession.

“They stepped up; they went man-to-man defense at the end, and we had some possessions that we didn’t convert,” Havre de Grace coach Brian Eberhardt said. “Marlon is a great player, but he’s only a sophomore and that probably lends to his inability to keep his emotions in check at the end. This is one of the biggest games he’s ever played in. He’s going to have a huge future.”

Justin Cohen scored a game-high 28 points for Crisfield, with 21 of them coming in the second half after CorTrey Fontaine had to sit due to foul trouble. Cohen also went a perfect 13-for-13 from the free-throw line.

“CorTrey is such an integral part of everything that we do,” Crisfield coach Dave Arnold said. “He changes the dynamic of the game, just him being in there. When he’s not in the game, it does effect us, but we have players that can play. We gave up more points than we’re used to giving up. Havre de Grace deserved to win as much as we did; we just punched last.”

The Warriors punched first Friday, jumping out to a 15-9 lead. Crisfield responded with a 7-2 run to close the first quarter, including a trey a the buzzer, and pull within one, 17-16.

The Crabbers scored two quick buckets in the second to take their first lead, 20-17. The lead bounced back and forth through the rest of the frame, and the teams settled for a 32-all stalemate at the half.

Havre de Grace came in with a plan to wear down the bigger and more physical Crabbers, and it paid off late in the second when Fontaine was forced to sit with three fouls.

“Our strategy was basically to get them in foul trouble,” Warrior senior Jordan White said. “We had them in the first half and just took charges.”

With the Crabbers’ big man out, the Warriors took full advantage, driving to the basket with authority during a 10-0 run that gave them their largest lead of the game, 46-37.

Cohen then found his rhythm and he almost single-handedly erased Crisfield’s deficit. He scored 11 in the period and by the buzzer, the game was once again tied 50-50.

“Man, that kid can play,” Eberhardt said. “He’s one of the better players in the state, I’m sure. He put them on his back and carried them.”

Crisfield finally got Fontaine back for good in the fourth, and he and Cohen combined for all but four of the Crabbers’ 22 points in the frame. Fontaine finished with 15 points and a game-high 15 rebounds.

Three other players joined Lewis in double figures for Havre de Grace. Gibson and Quentin Ware each had 11, while Josiah Scott chipped in with 10.

White, who will attend Youngstown State on a football scholarship in the fall, was the only senior starter for the Warriors. Havre de Grace, which won the UCBAC Susquehanna title, was the last undefeated squad in the Baltimore region.

“This team is the best team I’ve ever played with, and I’ve been playing basketball since I was six years old,” White said. “Hats off to my teammates, they’re incredible.”

One other Harford County squad, Harford Tech, also saw its state championship hopes, as the Cobras fell in the 2A East Region final at Wicomico, 67-60.

Tech had a tough shooting night on the Eastern Shore and fell behind by 11, 36-25, at the half. By early in the fourth quarter, the Cobras had battled back within three at 48-45, but Wicomico stretched the lead back out to 10 points and held off Harford Tech down the stretch.