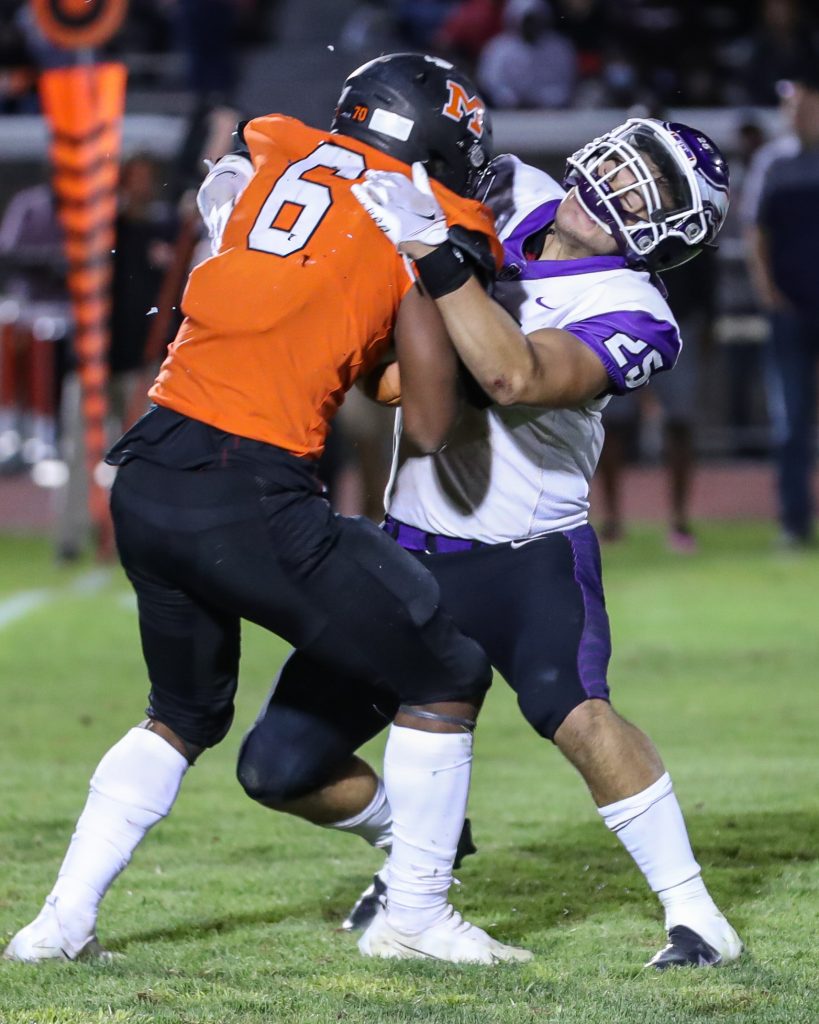 McDonogh running back Stephen Egbe (6) is met by Gonzaga’s Dylan Frost during Friday evening’s non-league football contest in Owings Mills. The Eagles led for nearly three quarters before fading against the District’s top-ranked squad in their first game since the 2019 MIAA A Conference championship game. (photo – Sports Majors)

Kaden Martin’s debut as McDonogh School’s quarterback on Friday night in Owings Mills went mostly swimmingly in the first half of the Eagles’ first football game since 2019.

Against a team as powerful as Gonzaga College, however, it wasn’t enough for the talented transfer from Tennessee to have just one good half. The second-ranked Eagles fell 23-7 to Gonzaga, ranked No. 1 in the District region by the Washington Post, in a non-league contest under the lights at John W. McDonogh Stadium in Owings Mills.

To beat the purple-clad Eagles from the vaunted Washington Catholic Athletic Conference, which Martin and his new teammates appeared to be on the verge of doing, it would have taken a nearly perfect outing — a tall order for a program that did not play in the 2020 campaign and featuring a new signal caller this fall.

The 6-foot-1, 205-pound senior did play the last two years, throwing for more that 2,600 yards and 20 touchdowns while rushing for 18 more scores at Knoxville Catholic.

So there is no doubt that he has the requisite skills to direct an offense, something he did with great aplomb on McDonogh’s second drive of the evening from Gonzaga’s 42-yard line when he connected on consecutive passes for a combined 38 yards to 2019’s starting QB, Preston Howard, who has been switched to wideout.

That gave the hometown Eagles a first down at Gonzaga’s 4-yard line from which Martin bullied his way into the end zone with just over seven minutes left in the opening quarter. Senior Sam Asplen’s conversion kick gave McDonogh a 7-0 lead it would hang onto until the final seconds of the third quarter.

On its next drive, Martin found senior wideout Jonny Cool on back-to-back passes for 24 yards before senior running back Stefan Egbe ran 38 yards to the Gonzaga 27.

From there, Martin scrambled for 11 yards and the drive eventually reached the Gonzaga 15 before it ended with a missed 39-yard field-goal attempt.

After senior defensive back Malachi Jones recovered a fumble early in the second quarter, McDonogh was back in business at the Gonzaga 37.

Egbe ripped off 17 more yards on the ground and McDonogh eventually had a first-and-goal at the Gonzaga 9, although senior Brendan Lane’s interception stopped any notion of a second touchdown for the hosts.

The defense was unscathed until the visitors finally put together an 11-play drive midway through the third quarter that concluded with a 31-yard field goal by senior James Miller to cut the lead to 7-3.

That score held until Martin was picked off for the second time when Myles Johnson snared an errant toss.

The purple Eagles would turn that miscue into a score when quarterback Carson Pettibon found fellow junior Brendan Lee for a 16-yard touchdown for a 10-7 advantage as time expired in the third quarter.

Junior Deuce Lee then stepped in front of another Martin aerial to give Gonzaga possession at the McDonogh 35.

Four plays later, junior wideout Jalen McDonald’s tumbling catch from Pettibon in the corner of the end zone boosted the lead to 16-7.

A 56-yard Egbe sprint gave McDonogh high hopes on its next possession, which reached Gonzaga’s four until ending on a blocked field goal attempt with just under five minutes remaining in regulation.

The final straw for the home team was Gonzaga senior running back Joseph Hammomd Jr.’s 33-yard touchdown run a couple of minutes later.

“We’re still learning,” McDonogh coach Hakeem Sule said. “We have the ingredients to have a good season. We just have to go back and look at the tape on how to improve in the red zone. We were playing a tough WCAC (Washington Catholic Athletic Conference) team for the first time with a new quarterback in a new system. The effort was there. We just have to learn how to finish.”

Trivers said that he didn’t know what to expect from the opposite Eagles.

“It took a little bit of time to get a feel from what they were going to do,” he said. “They’re a really good team with very good athletes, but we didn’t have any data on them. We looked to get more rhythm in the second half — and stop making mistakes. Our guys did a good job of staying in the moment in the tough times — like we had in the first half.”