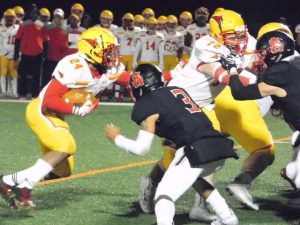 Calvert Hall’s Sean Tucker looks for some running space during the second half of Saturday’s Maryland Christian Schools Invitational Tournament title game against Archbishop Spalding. The junior running back finished with 258 yards and a touchdown as second-ranked Calvert Hall won the title with a 35-21 victory at Whittles Field in Severn.

A season once on the verge of collapse is now on the cusp of history for Calvert Hall College football.

The No. 2 Cardinals rallied for a 35-21 decision over third-ranked Cavaliers in the championship game of the Maryland Christian Schools Invitational at Whittles Field Saturday. Junior running back Sean Tucker rushed for 258 yards and a touchdown, and Amir Jenkins threw for a score and ran for another.

The Towson school extinguished an early 14-point deficit, scoring the final 21 points to claim its first championship since winning the MIAA A Conference title in 2010.

The Cardinals were at a crossroads nearly two months ago after senior quarterback Mike Campbell went down for the season with an ACL injury. They were borderline inept offensively in the opening half in a loss at Mount St. Joseph Sept. 29

The Hall defense held Spalding to 131 yards in the second half Saturday after giving more than 200 over three 10-plus play drives in the opening half. Jayden Umbarger finished with 327 total yards for Spalding.

Calvert Hall went for 239 yards on ground in the second half, mainly from Tucker, whose 83-yard touchdown run broke a 21-21 tie early in the fourth quarter. Ray Glass added 62 yards and a touchdown for the Cardinals.

It was redemption for Tucker, whose first quarter fumble led to Spalding’s second touchdown.

“I didn’t cover the ball up, but after that, I just let it go,” said Tucker, who had 186 yards on 17 carries in the second half. “I just trust my abilities.”

Jenkins, who replaced Campbell, called his number and went untouched into the end zone for an 11-yard score, extending Calvert Hall’s lead with 4 minutes, 10 seconds left in regulation. His 17-yard touchdown pass to senior Cole Herbert with 17 seconds left before halftime gave the Cardinals momentum.

“He’s playing like a sophomore. He shows flashes of brilliance and then he shows some areas where he needs some growth,” said Davis. “But to come to a place like this and play the way he has is tremendous. He’s going to be an outstanding player.”

Jenkins said the support of his veteran teammates, especially Campbell, has helped him through his indoctrination.

“I just had to adjust to the game speed and work on my mechanics,” said Jenkins, who completed all six of his attempts Saturday (55 yards). “I’ve watched a lot of film. These last couple of weeks have been great.”

It wasn’t a great start Saturday for Calvert Hall. The Cavaliers (7-3) went 93 yards in 18 plays on the game’s opening drive as Umbarger scored from three yards. On the Cardinals’ third play from scrimmage, Tucker blasted through a hole in middle, but Zaire Allen knocked the ball out from behind and Alex Green fell on it at Spalding’s 22.

Dominated by Umbarger (15-of-25, 163 yards passing), including a 36-yard pass to Khari Butler and 23-yard run on 4th down-and-5, the Naval Academy commit scored from a yard on the first play of the second quarter, extending the Cavaliers lead to 14-0. After an interception by Logic Hudgens, Spalding went on a 10-play drive, but Calvert Hall stopped Umbarger (36 carries, 164 yards) on 4th down.

The Cardinals put together a quality drive, traveling 55 yards in nine plays as Herbert, on 4th-and-3, caught a quick throw from Jenkins on the sideline, spun around his defender and went into the end zone.

It would be the only second half highlight for the Cavaliers, hoping to get payback and claim its first championship since winning the MIAA B title in 2010 (Spalding moved to the A the following season). The Anne Arundel County school was plagued by a rejuvenated Calvert Hall offensive and defensive front and a host of penalties including four unsportsmanlike.

“We lost our heads. We got beat by a very good team,” said Cavaliers coach Kyle Schmitt. “They were physical on both sides. Their character showed down 14-0.”

The MCSI was formed to provide a postseason opportunity for five MIAA A schools – Calvert Hall, Gilman, Loyola Blakefield, McDonogh School and Spalding – after the MIAA decided in August not to have an A Conference regular season and postseason tournament this season, declaring St. Frances Academy league champions after the aforementioned five schools elected not to play St. Frances.

“It’s all about relationships. We were blessed to have teams from D.C. and guys from Baltimore who get together with their kids and play some games at the end of the season,” said Davis who organized the event. “At the end of day that’s what it’s all about, building relationships with players and coaches.”

Calvert Hall has a couple of days to prepare for the 99th Turkey Bowl against Loyola Blakefield at Towson University’s Unitas Stadium Thanksgiving morning. The Cardinals have won the last four decisions (eight of nine) including a 27-6 victory last year.

“From the beginning of the season I felt this was a group of kids that was going to play four quarters every single week,” said Davis. “I knew early on, even though we went down a little bit, they would keep chugging away.”