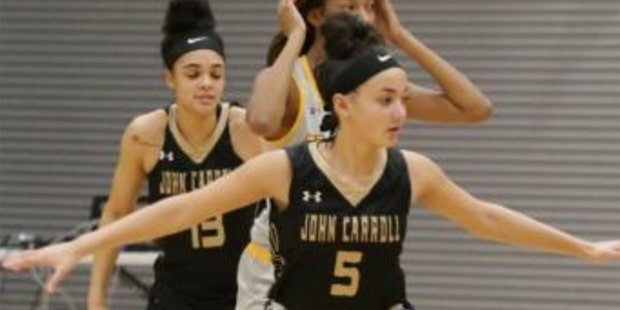 The IAAM “open season” for basketball tipped-off over the weekend, but Tuesday marked the first evening with multiple games.

John Carroll welcomed Gerstell Academy to Bel Air for the host Patriots opener and a pair of newcomers powered JC to an exciting 51-48 victory.

Tessa Boswell, who transferred in from Manchester Valley High School, led John Carroll with 13 points, while freshman Khaya Carter scored 10 of her 12 points in the second half to help the Patriots from a 30-23 deficit.

The game was razor thin most of the way and was not decided until a buzzer-beating three-point attempt by Gerstell missed the mark. The Falcons, who defeated St. Mary’s (50-46), last Friday, got a game-high 19 points from Kylie Redman and 10 points from Marley Sanders.

In Annapolis, senior Amanda Roy was the hero for St. Mary’s as her three-point jumper, late in the fourth quarter helped the Saints move to 1-1 with a 45-42 win over visiting Mount de Sales.

Roy, who also hit a three-pointer in the first half to finish with six points, broke a 41-41 tie with her final shot and the Saints held on from there. Bailey Walden and Kerry Kelliher combined for 21 points to lead the St. Mary’s offense, while Mount de Sales (0-1) received a game-high 12 points from Harper Eudy.