Penn State-bound big man controls the paint at both ends

St. Maria Goretti, behind the power game of center Abdoh Tsimbilla, traveled to Irvington Wednesday night and displayed a dominance rarely put forth by a visiting team in The Smith Center, as Goretti defeated No. 1 Mount St. Joseph, 64-53, to claim a share of first place in the Baltimore Catholic League.

Goretti (14-3 overall, 6-1 BCL) took a quick 5-0 lead in the first two minutes of the game, increased it to 10-2 after four minutes of play, and they closed out the first quarter with a 17-8 lead, which was never relinquish. 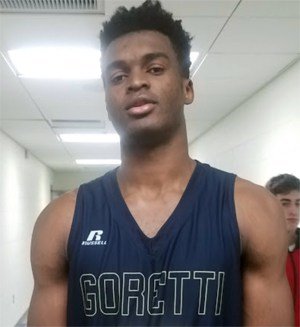 Abdou Tsimbila was an one-man wrecking crew for St. Maria Goretti Wednesday evening against Mount St. Joseph. The 6-foot-7 Penn State recruit posted a double-double of 20 points and 16 rebounds, and blocked seven shots as the Hagerstown squad handed the No. 1 Gaels their first loss in Baltimore Catholic League play with a 64-53 decision inside The Smith Center in Baltimore City.

At the center of the assault was Tsimbila, a 6-foot-7 center who will play in the Big Ten at Penn State University next year. He led the Hagerstown squad with 20 points, on 9-of-15 shooting from the floor, while hauling down 16 rebounds and blocking seven shots. Many of his putbacks were thunder dunks.

“Last year they beat us three times and tonight we came in knowing we had to get this one,” said Tsimbila. “We played hard and we played together. I’m very proud of our team, our coach, and our overall effort.”

“It was a complete team effort defensively,” said Blakney, a Baltimore native whose mother, Daphne Lee-Blakney, was a standout at Walbrook and the University of Maryland in the mid-1980s. “We knew we had to come out and guard well, because we know how good they are offensively. We communicated and played well on both ends of the floor.”

Rahsaan Edwards and Przemek Golek each had 10 points for Goretti, which shot 50-percent (18-for-36) against an always-tough Mount Saint Joe defense. Golek, a steady 6-5 senior, also dished out seven assists.

“It is a big win for us because we have set a goal to get first place in the league. We stayed together tonight and played at our pace. I think our defense was the best part of our game.”

“Our game plan was to get the ball inside to Abdou, get the ball out in transition and score inside off the pick-and-roll,” said McCray, a 2009 graduate of St. Paul’s who went on star for Shepherd University in West Virginia. “We shared the ball, scored on ball screens and kicked it out to open shooters. We played basic fundamental basketball.”

“They are a really good team, a talented team, and a veteran team with a lot of seniors,” said Clatchey, whose team fell to 14-3 overall and 6-1 in BCL play. “They have a lot of offensive weapons and we struggled to score tonight. The defensive glass was crucial and they got a lot of put-backs. We didn’t shoot well and they had a lot to do with that.”

James Bishop, who’s committed to LSU, led all scorers with 21 points for Mount St. Joseph, despite getting in early foul trouble. Bishop had three fouls with 3 minutes, 28 seconds to go in the third quarter and he picked up his fourth foul two minutes into the fourth quarter, which forced him to play tentatively the rest of the way to avoid fouling out.

Chandler Johnson had 11 points for MSJ, seven in the fourth quarter as he tried to spark a St. Joe come back with Bishop. But Goretti had just too much firepower on both ends of the floor in a dominant win in the tough BCL.