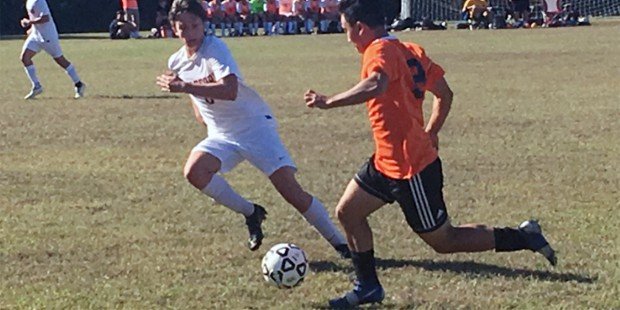 Nesteruk and Ahmad score 90 seconds apart; Spivey makes a clutch late save in final minutes to lift No. 7 Eastern Tech over 11th-ranked Hereford

The 11th-ranked Bulls were within seven minutes of emerging with a hard-fought 1-0 triumph over No. 7 Eastern Tech in a match between Baltimore County Public School heavyweights when the Mavericks rallied with two goals in 90 seconds to prevail, 2-1. 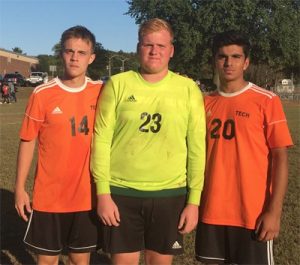 A clutch save by senior goalie Taylor Spivey with just over two minutes to go in regulation made sure that goals by Eastern Tech standouts Dillon Nesteruk and Arsalan Ahmad in the 73rd and 74th minutes, respectively, kept the Mavericks undefeated in five matches to begin the season.

While enjoying a 1-0 lead on a goal in the 52nd minute on a slick maneuver around Spivey for a tap-in by senior striker Niko Hillary, Hereford had applied plenty of pressure to double its advantage by earning several free kicks in the Eastern Tech final third.

“I was waiting for that kind of ball all game,” Nesteruk, a UMBC recruit, said about his fourth goal of the season. “Matt Davis got me the ball, so my job was easy. It just gave us so much excitement and momentum.”

Sure enough, as if on cue, 90 seconds later it was Ahmad’s turn to deliver a lethal blow when he headed a ball to himself, touched it off his knee and then sent a low-angle shot skidding past Hereford senior keeper Evan Barnard

His third goal of the young season put the Cavs on top and signaled the end of Hereford’s four-match winning streak to start the campaign.

“I knew that was my chance,” Ahmed said, noting that he missed all but two games last season because of a knee injury.

The Bulls, though, weren’t through.

Senior midfielder Austin Craig worked his way free to unleash a shot toward the corner that seemed destined to deadlock the score again until Spivey’s last-second dive gave him just enough reach to deflect the ball off his fingertips.

He added that he has been working on staying back on his line lately, which might just have given him enough time to turn Craig’s offering aside.

Spivey said that the soccer rivalry between the two programs made the win all that more special.

“There’s no way to describe it,” he said. “Even if you have a bad season and you beat Hereford, you’re doing something right.”

Hereford did a lot right during the match, according to Eastern Tech coach Peter Glaudemans.

“Hereford is an extremely talented, hard-working and well-coached team,” he said. “I’d say they won about 75 percent of the 50-50 balls today. But we’re a team that plays hard until the last minute.”

Nesteruk gave the Bulls an even higher grade.

Ahmad had high praise for Hereford as well.

“Obviously they were the best team today,” he said. “But when we got that first goal, we were back in it and I thought, ‘We could do this.’’’

And they did, although long throws by Hereford senior midfielder Logan Kauffman throughout the match tested the Mavs’ backline spearheaded by senior captain Ben Kropp.

“He’s our commander on the field,” Ahman said. “He’s always encouraging us and telling us to pick up our game. I have to give him a shoutout.”

Hereford coach Adam Mizell said that when the Mavs equalized, it was a momentum-shift that turned the game around.

“And then we got disorganized in the back,” he said. “And they were able to finish. Those kids know how to score.”

Mizell said that there’s no time to “pout and sulk” with a tough game against No. 10 Towson looming.

Eastern Tech, will take on a third Upper Chesapeake Bay Athletic Conference foe this season when it travels to Pylesville to meet North Harford on Saturday.