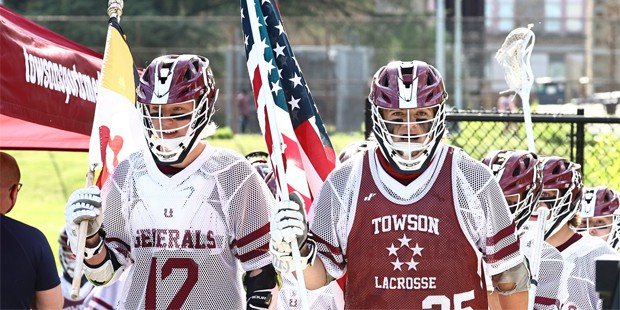 Generals receive great work in goal and at X, beat Hereford for first time since 2008

Senior Day at Towson High was a three-pronged success for the Generals boys lacrosse team, shined in all phases in a 14-9 victory over Hereford in a Baltimore County contest Tuesday afternoon.

The Generals (6-1 overall) constructed a commanding 10-2 halftime advantage, paving the way to their first victory in the last 15 meetings against the Bulls, who won 11 of 12 league titles between 2008 and 2019.

The 2020 season was canceled due to the COVID-19 pandemic. Towson last defeated Hereford in 2008.

The Generals, who shared the Baltimore County title with Hereford in 2017 (championship game was stopped due to an medical emergency and teams were declared co-champs), led 5-1 in the opening quarter with tallies from Kyle Ketterman, Jones (two), Nate Hochrein and sophomore Ben Ellis.

Hereford (5-2) battled back in the second half. The Parkton school pulled to within 12-9 midway in the fourth on a goal from Jay Bowen.

Hochrein regained order for the Generals with his second goal with five minutes remaining in regulation. Hochrein, a senior midfielder, added an assist with the two tallies, and Will Derbyshire finished with a goal and an assist.

Bowen, Chase Gibbons and Trey Gibbons each had two goals for Hereford, and senior Gavin Taylorson contributed a goal and an assist.

The Bulls complete regular season play Thursday at home versus Dulaney. Towson, which only loss came against Catonsville, travels to Franklin for its regular season finale Thursday.