Townes, Poly gets it done 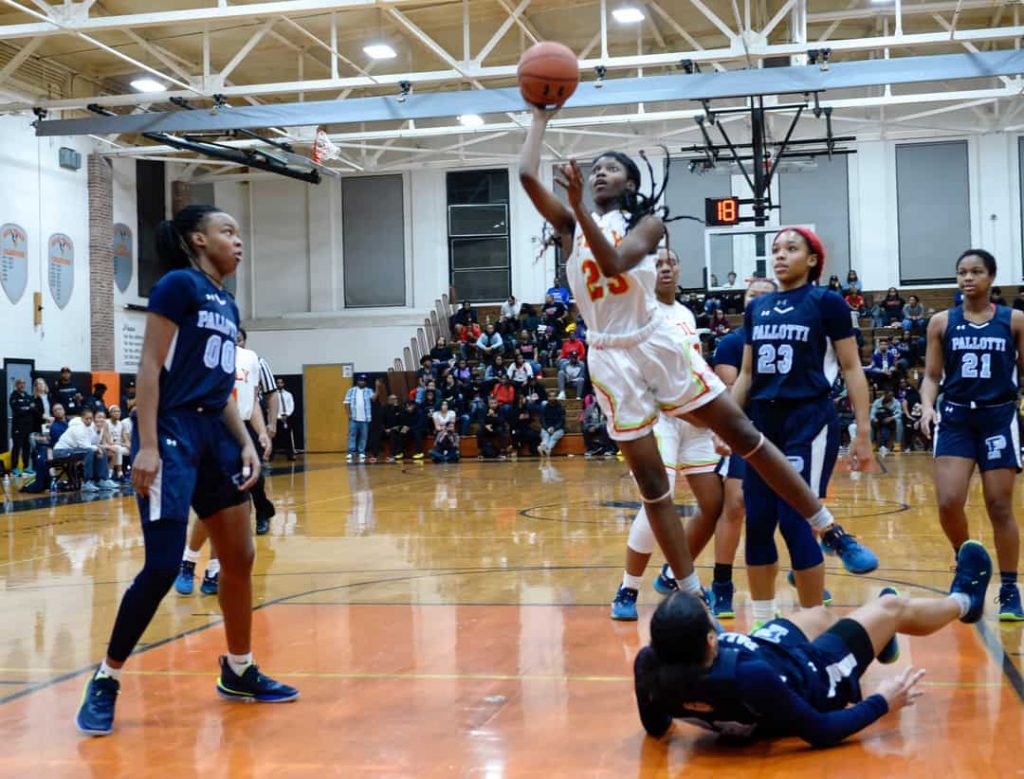 Poly’s Dasia Townes puts up a shot in the first half of Saturday’s girls basketball contest against St. Vincent Pallotti. Townes scored the winning basket with 4.9 seconds left in regulation as third-ranked Poly defeated the No. 2 Panthers, 48-47, at the Public vs. Private Challenge at McDonogh School. (photo – HoopHaven)

With her Poly High girls basketball team trailing St. Vincent Pallotti by one, Dasia Townes knew as soon as she got the ball with about 13 seconds left that she had to shoot.

Cach’e Wilson sent the bounce pass to her in the high post. Townes turned, dribbled once, stepped between two Panthers defenders and hit the left-handed layup to give the No. 3 Engineers a 48-47 victory over second-ranked St. Vincent Pallotti Saturday at the Public Vs. Private Challenge at McDonogh School.

“I just got the ball down post, turned around and I had to go,” said Townes, a 5-11 senior guard. “I mean, it wasn’t going to be anything else. It wasn’t a pass or anything. I knew that was my opportunity. If I didn’t make it, then it would have just been on me.”

Instead, the Engineers (10-1) celebrated Townes’ game winner after Jania Hall’s three-point attempt fell short for Pallotti at the buzzer.

Poly overcame a dismal free-throw shooting display, not just their eight-for-24 night, but especially while trying to catch up in the final 97 seconds of the game. They had a chance to make up a five-point deficit at the line, but managed to hit just four of eight attempts.

“We haven’t been this bad from the free throw line this year at all,” Poly coach Kendall Peace-Able said. “I mean some of it’s jitters, some of it’s nerves … but we don’t play too many games where people sit behind both baskets, so the depth perception, that does kind of change some things, but still no excuse. It’s muscle memory, so I’m just glad they went in when they needed to.”

Townes missed a couple of free throws during that fourth-quarter stretch and she was upset about it, but she credited her teammates with steadying her nerves.

“Coach Peace called a timeout and my team really built me up, so then they made me not put my head down for when it was time for that big shot,” said Townes, who led the Engineers with 16 points.

In one of the marquee games of the day-long Public Vs. Private Challenge, which featured 28 games on three courts, Poly used a 10-0 run late in the first quarter to take the lead. Pallotti tied it once in the second quarter, but didn’t take the lead back until the fourth quarter on a Hall free throw.

Pallotti had its own struggles from the free throw line, hitting just four of ten in the final quarter and going 9-for-20 in the game.

After Poly trimmed the lead to 47-45 and got the ball back on Tenea Robinson’s defensive rebound, Pallotti’s Ky Smith took a charge with 23 seconds left. Five five seconds later, the Engineers forced a loose ball and several players ended up grappling for it on the ground. Poly got possession on the tie up, but a Pallotti player said something that brought a technical foul.

Wilson hit one of the free throws to pull within 47-46 with 19 seconds left.

“They made some plays that they needed to make and we got a little sloppy,” said Pallotti coach Joe Matthews of the final seconds. “We got some fouls called. They made their foul shots. We missed our foul shots, and we didn’t get helped with any of the physicalness, the fouls that were being called, so we lost our mental focus for a minute and it ended up being the difference in the game.”

For the Engineers, who have lost only to Riverdale Baptist, the win is just another building block in their season, one they hope will end in the program’s first state championship after three trips to the title game in the past seven years.

“It’s just a step further into developing the team we want to be,” Townes said, “so being more disciplined, playing as a team and playing with each other [instead] of playing one-man basketball. We try to build a rapport with the team where I’ve got your back and the next man has your back, so that’s what this game helped to show. We got each other no matter what.”

After beating No. 2, the Engineers will take a stab at upsetting No. 1 St. Frances when they meet Jan. 25 at Morgan State in a girls-boys double header between the two schools.

“It means we’ve got to work harder…,” Peace-Able said. “We’ve got to keep pushing. This is the meat of the schedule. January’s tough.  I remember when I first got a lot of these kids who are seniors. That was probably Seton Keough’s last year of being open. They gave us a 30-point game. They beat us by 30. Everybody who was non-conference beat us by 30 or something, 15 or 20. They took a lot of lumps as freshman, so progressively, what you want to see as a coach is that growth and that maturity, so I’m very, very proud of them.”