No. 2 Pallotti gets past McDonogh for IAAM A basketball final berth; Russell scores 20 (VIDEO HERE!) 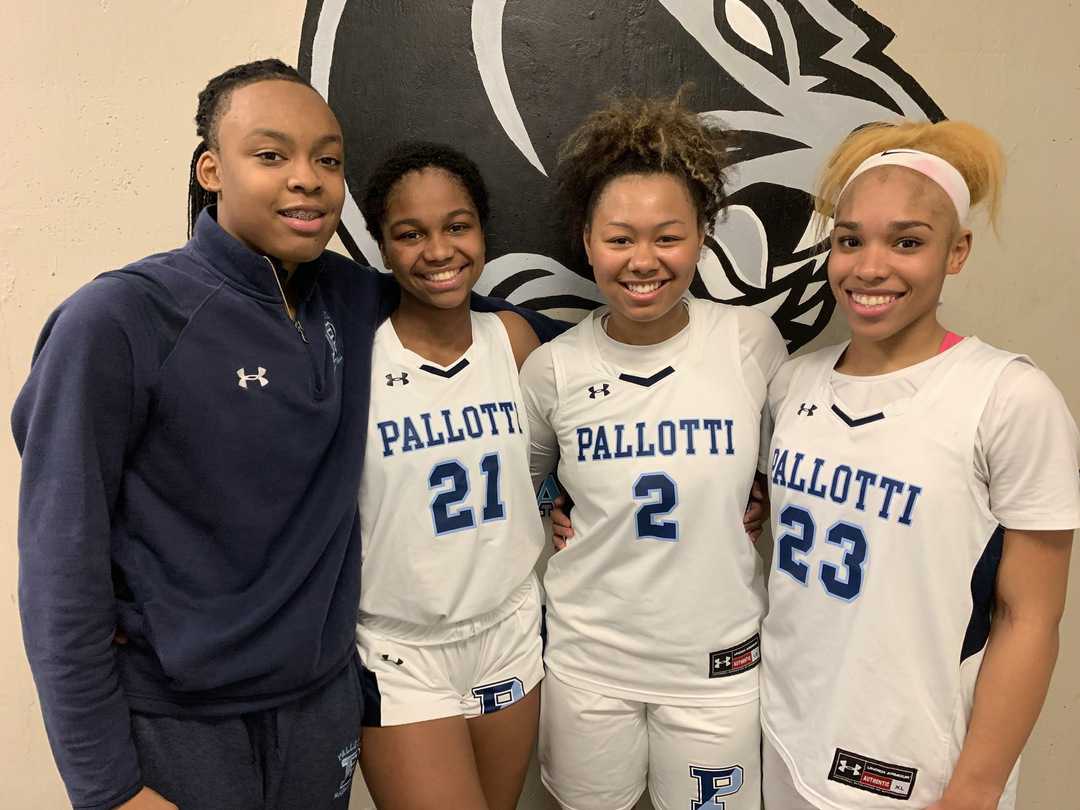 Eniya Russell (left), Larrin Syndor, Jania Hall and Vashae Rideout were huge down the stretch for St. Vincent Pallotti girls basketball team Thursday evening. The third-ranked Panthers advanced to the IAAM A Conference final with a 46-44 victory over No. 4 McDonogh Schoool in a semifinal match in Laurel.

Every season has been like Christmas for Jania Hall. That hasn’t necessary been a good thing for the St. Vincent Pallotti High guard.

Three coaches in four years. She’s seen players transferred in and out, including five new faces this season.

It’s been an interesting journey, to say the least for Hall. But it’s finally ending in a place she’s been desperately wanting to reach.

The third-ranked Panthers advanced to the IAAM A Conference final with a thrilling 46-44 victory over fourth-ranked McDonogh School in a semifinal contest in Laurel. Senior guard Eniya Russell scored 20 points for Pallotti (21-5).

The second-seeded Panthers overcame an eight-point second half deficit, making numerous little plays down the stretch to punch their ticket to Stevenson University. Pallotti will play No. 2 and top-seed St. Frances Academy, a 51-48 victor over No. 5 seed and seventh-ranked Roland Park Country School, Sunday evening at 6 for the title.

The season has been work in progress for Pallotti, trying to mesh a talented roster into a cohesive unit. In their penultimate match Thursday, the Panthers displayed championship grit.

“We have so many different personalities, and we all just found a way to work together,” said Hall. “We worked together very well and that’s why we got the ‘W’”

It was “little plays” like Larrin Sydnor’s two rebounds or Vashae Rideout helping force a McDonogh turnover in the critical final seconds that pushed Pallotti to its first championship game in a decade.

“There was a number of possessions in the first half they exerted their will on us with four or five offensive rebounds,” said Panthers coach Joe Mathews. “At halftime, we said we got to match that intensity. Our girls were really attacking and flying to the ball.”

Russell, a McDonald’s All-American who transferred from Institute of Notre Dame, put the Panthers up, 44-43, driving into the lane and dropping a floater with 1:01 left in regulation. The University of South Carolina recruit came up the defensive rebound after McDonogh missed the front end of an one-and-one and was fouled with 13 seconds left.

Russell also missed the front end of the one-and-one, but Sydnor came up with the rebound and was fouled with 12 seconds left. Sydnor was unable to convert with the double bonus, but Rideout immediately collapsed on McDonogh guard Jayda Oden who was unable to get control of the ball before going out of bounds with nine seconds remaining.

Rideout, a junior transfer from Western, converted two free throws with seven seconds to play, extending Pallotti’s lead to 46-43. Makaela Quimby was fouled with three seconds remaining, and made the front end of the bonus.

“There were many new faces, so nobody knew what each other could do,” said Sydnor, who transferred to Pallotti with sister Larri from Catonsville. “We had to learn to build with each other so we’d be able to win big games like this. We’re going to championship Sunday.”

McDonogh, looking to reach a ninth title game in 10 seasons, led 28-22 at halftime after a 16-6 run to close the second. Trailing 30-22, Rideout missed a layup but dove to the floor for the ball. She found Hall who scored, sparking a 6-0 spurt that put Pallotti back in contention.

“It was really rough at the beginning of the season. We had ups and downs, but at the end of day, we came together as one,” said Rideout. “We’re still working together to be a team, but tonight, we had each other’s back.”

Quimby, a freshman, finished with 16 points for McDonogh (19-7) and junior guard Oden added 14, all coming in the opening half. The young guard showed strides this season, handing St. Frances its only league loss a few weeks ago.

But the Eagles made several critical turnovers in the second half Friday, costing them a Championship Sunday berth.

“The kids really develop nicely and did everything we asked,” said Eagles coach Brad Rees. “Turnovers have been our problem all year. You’re going to beat teams playing that hard.”

Mathews said he and his staff has figured a rotation that works. Now, the Panthers must figure out St. Frances, which swept them (70-59 and 63-50) during the regular season.

Pallotti last won an IAAM championship in 2007 (B).

“We’re still locked in. It’s not over yet,” said Hall. “We’re going to come out on Sunday and play our game.”

No. 2 Pallotti gets past McDonogh for IAAM A basketball final berth; Russell scores 20 (VIDEO HERE!)