Top-ranked Calvert Hall remains undefeated with a win over No. 14 Concordia Prep 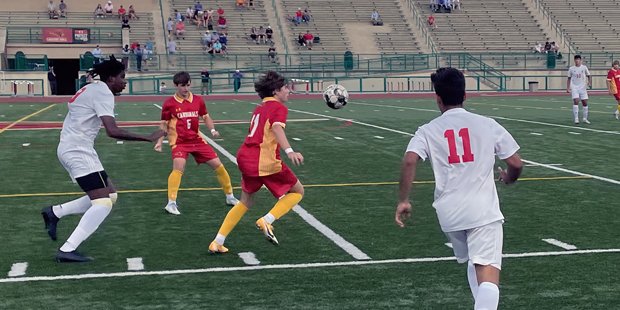 by Joe DiBlasi
A big, strong and aggressive Concordia Prep soccer team displayed no fear as it entered the pitch with top-ranked and undefeated Calvert Hall, Monday afternoon at Paul Angelo Russo Stadium. The Saints were physical and displayed an excellent work rate, but when all was said and done, the Cardinals flashed just enough superior skill to come away with a 2-1 MIAA A Conference victory.

Tyler Flynn (left) gave Calvert Hall a 1-0 lead in the first half and Ben Madore netted the game winner on a second half PK.

Ben Madore broke a 1-1 second half tie with what proved to be the winning goal, on a penalty kick, 14 minutes into the second half.
From there both teams continued to create chances, but both goalkeepers, the Cardinals’ Nate Jones and the Saints’ Colton Drought, were exceptional in this one, turning back 13 and 12 shots, respectively.
Jones came up big in the 16th minute of the first half, stopping back to back shots on goal from in the span of just a few seconds, to protect a 1-0 Hall lead. The sequence started when Concordia’s Ryan Calheira struck a left-footed blast from the left edge that Jones blocked with a lunging two-haded stab. The rebound sat in the center of the box where Yuri Braga one-timed it off a bounce, only to see Jones rise to his feet and make another diving stop.
Junior Tyler Flynn put had put Coach Rich Zinkand’s Cards on the board eight minutes into the game on a feed from Rich Monath. The Saints tied it at one on a PK by Braga, with 32:08 left in the second half, but the Saints were unable to find the net again.
“They’re a very tough team, especially their goalie,” said Jones. “I had help on defense today. Josh Nagy and Ben Ramsey hustled all over the field, and helped stop a lot of shots.”
Jones also spoke highly of his teammate,Tyler Flynn. “Tyler made an amazing shot on a really good keeper.”

Calvert Hall goalkeeper Nate Jones was a hero with 11 saves to help the Cardinals remain unbeaten.

In addition to his spectacular back to back saves in the first half, Jones stopped a Saints’ point-blank shot from Alexander Xavier with 14 minutes to go in regulation that would have tied the game.
“It was a tough game,” said Zinkand. “We knew that they we’re going to be tough coming in; they’ve got some players. We didn’t capitalize on some chances, but give Concordia a ton of credit. They played a very hard, physical game, that kind of knocked us out of our game a little, but that is something we have to get used to.
“Nate (Jones)came up big on those two consecutive saves in the first half, and we need Nate to make saves like that to help us win games like this.”
Zinkand also praised Flynn.
“Tyler is a junior and a three year varsity player; he loves to go forward and we need him to keep going forward to win games that are tough like this one.”
Concordia Coach Adauto Neto was impressed with the effort of both teams.
“It was a great match,” said Neto. “I think both teams played very well, both defensively and offensively. Both keepers came up big and they made some great saves.
“I’m proud of my boys. We gave Calvet Hall a game, right to the end, but we fell short. We came in here and played a great game against an undefeated team that’s in first place in a tough conference, and that will help us grow our confidence. We still have a long way to go this season, and I have faith in my team that we will finish strong.”
While Calvert Hall (7-0-1) leads the conference with 22 points, Concordia fell to 2-4-1 and would miss the playoffs if the season ended today. They trail Archbishop Curley by one point in the standings in the chase for the sixth and final playoff spot. The good news for all of the contenders is that a half of season remains.
NO. 1 CALVERT HALL 2, NO. 14 CONCORDIA PREP 1
CP 0 1 — 1
CH 1 1 — 2
GOALS: CP-Baaga; CH-Flynn, Nadore.
ASSIST: CH-Monath.
SAVES: CP-Drought 13; CH-Jones 11.

NO. 2 MCDONOGH 3, BOYS’ LATIN 0
No. 2 McDonogh maintained its hold on second place in the MIAA A Conference with a 3-0 road win at Boys’ Latin.

NO. 8 GILMAN 1, MOUNT ST. JOSEPH 0
Backed by another strong defensive effort, Gilman defeated visiting Mount St. Joseph, 1-0, at Gilman.
The only goal of the game came with three minutes left when Carter Capodanno lofted a long free kick into the box. The ball was initially headed by a Gael defender, but Josh Melancon knocked it in off a scramble.
It was the fifth shutout of the year for the No. 8 Greyhounds (6-1, 5-1), who moved into third place in the conference.

NO. 12 JOHN CARROLL 0, NO. 9 LOYOLA 0
In an evenly matched game at Meadowood Regional Park in Brooklandville, No. 9 Loyola and No. 12 John Carroll played 100 minutes of scoreless soccer and settled for a draw.
Goalkeepers Jordy Eckman of Loyola and Amir Smith of John Carroll both made some nice stops to keep the game level.
John Carroll (4-3-2) is in fourth place in the league and Loyola (3-3-3) is two points back in fifth.

NO. 19 ARCHBISHOP CURLEY 4, ST. PAUL’S 0
No. 19 Archbishop Curley reversed a recent scoring draught with four goals on the road at St. Paul’s in a 4-0 victory.
Junior striker Brady Geho led the way with a pair of goals. Alex Krisher opened the scoring off an assist from Phillipe Oliveira. An own goal accounted for the team’s other goal. Krisher and Camden Keller added helpers.
The Friars are now 3-4 and St. Paul’s fell to 1-4-2.